Five Romcoms You Should Side-Eye.

After a brief conversation about John Hughes’ 1984 teen romcom classic, Sixteen Candles, this morning, I was reminded of something I’ve always suspected by never taken the time to truly analyze: romantic comedies are never as innocuous as their writers would have you believe. For all their spin about happy endings, they’re about as kind to women as Hans Christian Andersen fairy tales and for all their denigration of women, they’re equally damaging to dudes.

Think about it. We all know the setup: the stars meet cute; they quarrel; and they reconcile over strains of an ovary-tingling, Lilith Fair-friendly jam. But let’s just stop for a minute and really dissect these “quarrels.” If a guy cheats on his new love interest in a romantic comedy, she’s getting off easy. Most of the time, it’s a whole lot worse than that. In fact, were many of the scenarios you find in classic romantic comedies to surface in real-time, they’d be downright unforgivable offenses.

Here are five romantic comedy “quarrels” that should’ve ended in restraining orders, rather than reconciliation: Kathleen Kelly’s children’s bookstore, Just Around the Corner, is her life. Not only is it her main source of income, but it’s also her biggest tangible connection to her long-deceased mother. She inherited the store and is determined to carry on her mother’s legacy of charging 75 bucks per hardcover classic to upper-crust Manhattanites. Yes, Kathleen’s dream is unrealistic–even if this film takes place a good 15 years before the Kindle. But she’s pretty attached to it. She’s a precious, cutesy, storytelling, sweater-set-wearing nitwit, then, for letting the man who bankrupted her shop with his Barnes & Noblesque megastore also steal her heart.

I like Tom Hanks as much as the next guy and he was particularly hot in that movie. But if you force me to close down a store my mother ran for forty years, you’re not gonna be able to bring me daisies, mock my attraction to an internet pen pal who happens to be you, stand me up for a blind date with said internet pen pal, and then effectively woo me. While Kathleen tearily breathes, “I hoped it would be you,” as Joe reveals his identity as her online love, I’m still mourning the loss of the handtipped pop-up books she lost to his steamrolling.

This one’s not so much a quarrel as a general side-eye to John Hughes for trying to sell Jake Ryan as a “dream guy.” The lowly sophomore Samantha wants the most popular boy in school. Despite being Molly Ringwald, Samantha laments her homeliness and invisibility, while pining over the unattainable senior. But Jake’s no prize and you can’t convince me otherwise. Because while we’re all swooning over the romance of him trying, in his high school way, to pursue her, we forget he’s also pimping out his current girlfriend to Anthony Michael Hall. He actually says, before pouring her passed out body into a car, “I could violate her ten different ways if I wanted to.” Then, the next morning, upon finding out that Hall has, in fact, violated her (neither claims to remember, but sex was had, which means she didn’t consent), Jake tries to get retroactively protective. “Do you want me to beat that guy up?” No. I want you beat up. Before you’re doing the same thing to a passed out Samantha next year.

Sabrina, the chauffeur’s daughter, is hopelessly in love with her employer’s wayward, playboy son. So what does his responsible, ruthless brother do? He courts her, convinces her that he’s falling for her and wants to move to Paris with her, then brutally confesses that he’s really been trying to pay her to leave the country alone all along. Look, I don’t care if you are ’90s era salt-and-pepper-hot Harrison Ford. Nobody deserves a love redux after a diss that harsh. 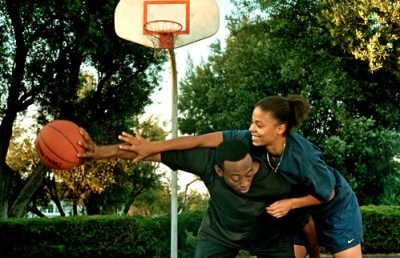 I know this is going to tip a few sacred cows, but lemme throw caution to the wind right quick: Quincy was an asshole. I’m sure it’s really heart-warming to see him bouncing his daughter and watching his WNBA-playing wife from the sidelines, secure in his self-worth and masculinity, but should Monica have put up with all that to get us here? And by all that I mean, being blamed for having ambition, being cheated on, then dumped pretty publicly outside the college dorms, and then being beaten in the game-for-his-heart because he thought she needed to be taught some kind of lesson (What lesson, you ask? I’m still wonderin’, too. You hurt her on purpose. She hurt you by accident. Herb.)

It’s true that Julia Roberts doesn’t actually get the guy in this movie, but she’s lucky she didn’t catch a case. Hacking into people’s email is a felony, Jules. If you kiss a groom three hours before his wedding, in an attempt to get him to cancel it, you should get a lot more than, “You’re the pus that infects the mucus that cruds up the fungus that feeds on the pond scum,” as a reprimand. And you for damn sure shouldn’t be still allowed to participate in the wedding. I don’t care how many songs you loan the happy couple that used to belong to you and the groom when y’all were kickin’ it.