Getting Even, DC City Council Edition. 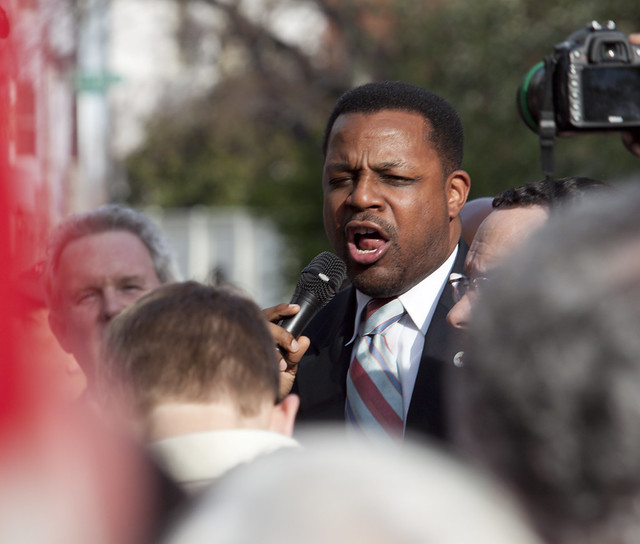 As we’ve mentioned before, the DC City Council is kind of a hot mess right now.  And Council Chairman Kwame Brown (pictured above) is only making it worse.

On Monday, Brown announced a shuffle of committee assignments, removing popular Ward 6 Councilman Tommy Wells from his chairmanship of the Committee for Public Works and Transportation, six months after Brown shifted it to Wells.  Wells has been a strong advocate of “urbanist” policies in DC, including expanding bus service in Wards 4, 5, 7 and 8, providing more bike lanes throughout the city, and increasing pedestrian safety.

Does Wells’ name sound familiar?  That’s because the Committee on Public Works and Transportation investigated Brown after he had the city lease a fully loaded Lincoln Navigator L for him:

The saga begins in late January, when Washington City Paper’s Alan Suderman reported that Brown’s Lincoln Navigator was costing the city about $2,000 a month to lease. Then, in February, I reported in the Post that Brown sent back one Navigator SUV before getting another, with the black interior he preferred and the city paying big bucks for both. In that article, Brown maintained that he asked only for a black SUV with a black interior.

Now Suderman uncovers more e-mails that undermine that claim. City Paper submitted another records request, for documents predating the ones I had requested for my February story. The e-mails show evidence that Brown wanted something much more specific than a “black-on-black SUV.” He wanted something mayoral.

One day after the rented Tahoe was delivered on Nov. 4, Larry Cooper, the D.C. Council staffer who acted as a liaison between Brown and [the Department of Public Works], told DPW staff the chairman-elect did not want just a plain ol’ Tahoe. Here’s a Nov. 10 email from DPW employee Michael Biggs to his subordinate Greg Harrelson, who acted as DPW’s point person in getting the lease on Brown’s Tahoe.

”I had a talk with Larry Cooper last Friday and he said Chairman Brown wants a Navigator comparably equipped as Mayor Gray’s. I told him ok. So make sure we get that instead of another Tahoe. 10-4?”

Right.  As the local blog Greater Greater Washington points out, the responsibility to investigate fell squarely within the committee’s jurisdiction.  Wells would have been doing a disservice, perhaps falling into one of the ethical lapses that has trapped so many of his colleagues (including Brown, who is also under investigation for campaign finance irregularities), had he not explored the allegations.

Brown maintains this is a “unique opportunity” to rearrange the council’s committees that “effectively [consolidates] areas of similar interest.  I call bullshit shenanigans.  The Washington Post, Greater Greater Washington, and dean of the local reporting corps, Tom Sherwood, are not convinced either.  Brown removed Wells from the transportation committee, giving it to his second in command on the Council, Ward 3 Councilwoman Mary Cheh.  Wells is now chair Committee on Libraries, Parks and Recreation, which is about as important as it sounds, no offense to libraries.   Planning and zoning have been split into two different committees.  Alcohol licensing is with human services (ha!), and completely separated from other city licensing bodies.  The Committee for Economic Development is being brought under the umbrella of the Committee of the Whole, which is-surprise-controlled by Brown.

Perhaps I’m a myopic little twit, but it feels like the city is taking two steps back for every baby step forward.

Oh, and I haven’t even addressed Ward 8 Councilman and Mayor-For-Life Marion “Bitch set me up!” Barry’s brilliant idea to eliminate rental housing in his ward in an effort to increase home ownership rates.  Renters allow drug dealers, don’t you know?

I’ve lived in the city for 10 years, just outside it for another seven.  I love DC.   But seriously, it’s awfully hard to ask that the city be allowed to manage its own affairs when the head of the City Council (and the mayor too, in my opinion) are not up to the task.

UPDATE: You can listen to WAMU radio host Kojo Nnamdi and Tom Sherwood talk to Tommy Wells on the Politics Hour.  And Mike DeBonis of the Washington post has a good postmortem.