Your Monday Random-Ass Roundup: A First Lady, A Force, A Ford.

At the start of what’s shaping up to be a particularly news-heavy week, we at PostBourgie didn’t want to forget to pay our respects to former First Lady Betty Ford. She died at the age of 93 Friday.

In addition to her important and lasting work in substance abuse recovery, Carl Sferrazza Anthony reminds us that Ford “was a Republican of the type now vanished, whose first loyalty was to the old Lincoln principle of civil rights for African-Americans and equal rights for women, but never went blind as a partisan.”

Quite simply, that’s worth saluting. 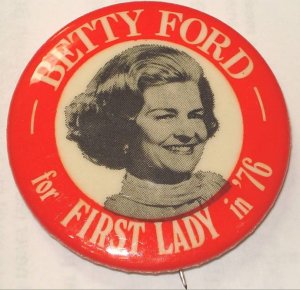 1. Shani looks at several pieces of prison reform legislation that are languishing in Congress. (G.D.)

2. According to Nsenga Burton of The Root, two GOP presidential contenders – Michelle Bachmann and Rick Santorum – are backing away from a previous pledge called “The Marriage Vow” which conflates homosexuality with polygamy and adultery. Another part of the pledge also says this: “Slavery had a disastrous impact on African-American families, yet sadly a child born into slavery in 1860 was more likely to be raised by his mother and father in a two-parent household than was an African-American baby born after the election of the USA‘s first African-American President.” AHHH_WHAAAAT? So slavery is the cure to this fatherless-ness epidemic the black community is suffering from? Wonder if the “No Wedding No Womb” Initiative would agree. (Naima)

3. At the center of the GOP opposition to tax hikes is Grover Norquist, who has pushed all but a handful of House and Senate Republicans to sign the anti-tax “pledge” of Americans for Tax Reform. (Blackink)

4. Gov. Jerry Brown of California throws his support behind an effort to end the state’s ban on affirmative action in college admissions. (G.D.)

6. With Texas Gov. Rick Perry seemingly poised to join the GOP presidential field, Paul Burka of Texas Monthly wonders if Perry’s stance on the bailout can stand up to scrutiny. (Blackink)

9. The Guardian, where News of the World’s hacking scandal first broke, has the full post mortem, and asks if this is the beginning of the end for Rupert Murdoch. (Nicole) And in a bit of breaking news: Former U.K. Prime Minister Gordon Brown says he was also targeted in the hacking scandal. (Blackink)

10. 34-year-old Rodrick Shonte Dantzler went on a killing spree last Thursday in Grand Rapids, MI, killing seven victims–including his own 12-year-old daughter, two ex-girlfriends, and a ten-year-old girl riding her bike in the afternoon. Later, after a five-hour hostage stand-off, Dantzler turned his .40 caliber handgun on himself, ending the most horrific day in the otherwise serene Midwestern city’s history. Neighbors say Dantzler was off his bi-polar medication. (I wrote about it, too, but thought it might be tacky to use my own link.) (Stacia)

11. In the wake of the Casey Anthony murder trial, Jennifer Mascia ponders whether it makes sense to sequester jurors anymore. (Blackink)

12. Edwidge Danticat further takes journalist Mac McClelland to task about the actions surrounding her GOOD piece on her experiences in Haiti. Danticat asserts that McClellan live-tweeted details and whereabouts of one of the rape victims she trailed and interviewed, jeopardizing the subject’s life.  (Stacia)

13. Western advisors, researchers and money were among the forces that contributed to a drastic reduction in the number of women and girls in East and South Asia. “And today feminist and reproductive-rights groups are still reeling from that legacy.” (Blackink)

14. The UN has released a progress report on the Millenium Development Goals (MDGs).  For those not familiar, the MDGs are a set of 10 goals set by the UN member nations in 2000 to help eradicate extreme poverty by 2015. Highlights: growth in Asia (specifically Southeast Asia) is artificially inflating the poverty reduction numbers, education access has improved, but girls are still lagging far behind, and maternal health and under-5 mortality are still pretty awful. 4.48 years to go! (Nicole)

16. A Seattle branch of JP Morgan Chase Bank had a 28-year old construction worker thrown in jail for trying to cash a forged check.  Only, the check wasn’t forged.  And while he was in jail, he lost his job, and his car was towed and auctioned off. (Nicole)

18. The press-shy Queen of Soul sits down for a profile in The New York Times. She claims she’s never recorded a song she didn’t like (“well, maybe once” ) and regrets dropping out of school when she was pregnant. “Here is a woman who has fulfilled every professional expectation that has been had of her since she was a teenage prodigy in her father’s choir loft; a woman for whom the word “legend” can be applied without grade inflation. And yet she is also a woman who still gets lonely on a bus, who feels she has to keep secrets, who blushes when the president compliments her appearance, who’s still out there looking for love — and confident that she’ll find it.” (G.D.)

20. Grantland offers three essays on the thrilling weekend at the Women’s World Cup in Germany. (Blackink)

Got questions, comments, corrections or suggestions? That’s what the space beneath the post is for.

Enjoy the rest of the week.