Home » Browse PostBourgie » On Being a Good Neighbor.

On Being a Good Neighbor. 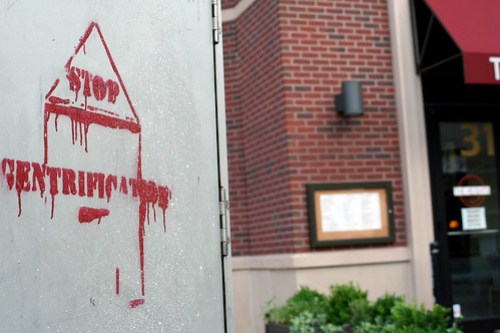 DCentric, a blog from DC’s local NPR affiliate covering race and class posted a piece several days ago called “Five Ways to be a Good Gentrifier.”

Are you a middle or high-income earner, who is probably white (but not necessarily!) and has moved into a predominantly black or Latino low-income neighborhood? And is that neighborhood rapidly changing, as longtime residents move to less expensive suburbs because they can’t afford to live in the neighborhood’s revamped, much pricier apartments? Check off a bingo card if you must: you live amongst hip coffee shops, with white people where white people never dared to go before and patronize yoga studios that were once corner stores. Face it: you’re a gentrifier.

For the self-aware and well-meaning among the gentry, the guilt can be almost akin to white guilt — your very existence can make you feel bad. But if you’ve moved into a rapidly gentrifying neighborhood, there are ways you can be a good neighbor. Here are five things to get you started, and feel free to suggest more in the comments section:

I have two problems with this piece.  The first is that it’s firmly stuck in the “not funny” zone.  Either make it undeniably tongue-in-cheek, or make it an actual, serious examination.  Muddling around in the middle just serves to trivialize the issue, which is a recipe for disaster.  Second, and more importantly, these are not rules for being a good gentrifier, these are rules (as Alex Baca of the Washington City Paper tweeted) for being a good neighbor, period.  I would go do so far as to say, the reason why gentrification is such a hot button topic is because people apparently need primers like this.  If you can’t behave like a decent neighbor/human being, I wouldn’t want you living down the street either, regardless of what it does to my property values.  Confusing being a “good gentrifier” with being a good neighbor, as if it is something special, is probably a large part of the reason gentrification gets such a bad rap.  Hell, “gentry” itself is a socioeconomically loaded term.

This is something Levy (and myself) have noticed among some young, white commuters in particular. For instance, there is a recreational center near Levy’s home where children and youth often hang out in front. Some commuters getting off the nearby Metro pass by the center as they walk home.

“And I’ve noticed this in terms of white people who will cross the street before they even get there,” often going out of their way, or blatantly crossing the street near the center, she says. “Sometimes there’s an assumption that because they are kids, you will have cracks thrown at you or something. But you walk by and you’re either going to say ‘hi’ and they’re going to say ‘hi’ back, or they’re going to make a comment and you ignore it, or they will most likely ignore you because you are not the center of their world.”

A lot of Levy’s advice centers around being aware and mindful of your own internal reactions to various social situations and questioning those motives. In the case of crossing the street, she says people may want to ask themselves: “Is this something I really need to be worried about? Or is this sort of a knee jerk reaction?”

5. Visit local, small businesses and take note of what they offer. Some sell things you actually want.

It’s difficult for existing, small businesses to survive waves of gentrification, even if they start selling products appealing to the new residents. John McIlwain, a housing and urban issues expert with the Urban Institute, previously explained to us that “if the store sends the message that this is a store for the low-income community, most of the new residents… will look elsewhere to shop.” This is despite what products the store carries.
Those kinds of unspoken messages include such things as having bullet-proof glass. Whether the shop owner should adopt to survive and take down the glass altogether is another matter. But if you need a nice bottle of wine or a gallon of organic milk, don’t necessarily assume a store doesn’t have it simply because of the presence of bullet-proof glass. Check it out first.

Scary black kids?  Bulletproof glass?  For a blog that recently published a piece (from the same author no less) explaining why you should rethink using the term “ghetto,” this sort of trafficking in stereotypes is surprising, to say the least.  While there have been some nasty incidents of youth led violence in DC lately, I feel comfortable in saying this is the exception, not the rule.  In my travels around DC, I have yet to see roving bands of angry teens waiting to attack me.  I have no doubt there are bad eggs out there, but I feel pretty safe in saying that when the kids on the block know you (you know, because you’re a decent human being who says hi and helps someone’s grandma get her groceries up the stairs), your chances of violence are dramatically decreased.

This piece was written by Elahe Izadi, one of the two authors of DCentric.  I would be remiss in not noting that I count Anna John, DCentric’s other author, as a good friend.  My understanding is that DCentric has a follow up piece planned, with commentary from our own quadmoniker, among others.  I’ll be curious to see what it says.

What say you commenters?  Is the delivery off?  Is this even about gentrification?  Have at it.