With Donald Trump, it’s tough to know if his recent embrace of birtherism is a publicity stunt or borne from a deep pool of idiocy.

But he’s right about one thing: I have little doubt that he’s familiar with all sorts of fraud.

Dude’s not even qualified to be president of the Hair Club for Men. 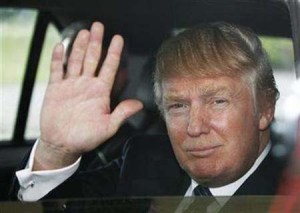 1. Is your state broke? Maybe they need to raise taxes. (Blackink)

3. More data on the change in racial and ethnic populations, this time from Sociological Images. (Blackink)

4. Salon has a slide show of the 10 most segregated cities in the U.S. In a bit of an upset, none of them are in the South. (Blackink)

5. Ann Friedman has a devastating parody of that New York Times piece on young, up-and-coming, prominent political pundits in D.C. who all happened to be white men. (Monica)

6. Since we’re intervening in Libya, how about Ivory Coast as well? (Nicole)

7. Nigeria’s version of “Sesame Street” finally makes it debut. Unlike the U.S. version, “Sesame Square” will address specific issues that children in Nigeria face, like malaria and HIV/AIDS, in addition to counting and ABC’s. On a lighter note they will have a monster… a Yam Monster in lieu of a cookie one. (Naima)

8. Florida Gov. Rick Scott “is one of the most entertainingly shameless figures in American political life.” (Blackink)

9. Another top 10: WSJ offers up a list of the industries that appear to be dying. (Blackink)

10. Racialicious reviews CNN’s latest documentary as part of their “In America” series: “Unwelcome: The Muslims Next Door.”  “Ultimately, the special reveals how easy it is for bigotry to triumph over common sense – and the difficult road facing those in Murfreesboro, who are suddenly considered outsiders in their own hometown.” (Blackink)

11. Single men, want to impress your Facebook friends? Let Cloud Girlfriend help you with that. (Blackink)

12. Thabiti “Bruce” Boone turned down a chance at the national junior college Final Four to be the father he never had. Turns out, he was much better at being a parent than a point guard. (Blackink)

By now, you should know the drill. Any links, comments or suggestions are welcome in the usual spot.