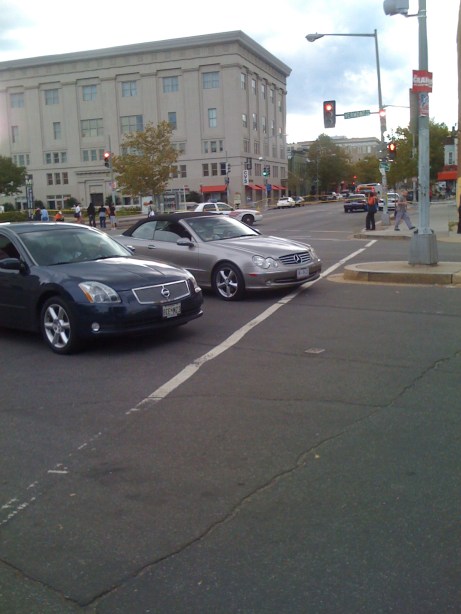 Postbourgie’s own Shani Hilton has a much-discussed cover story in the Washington City Paper about being a black gentrifier.

Freddie at L’Hote has some criticism:

This is a several-thousand word article on the relationship between race and socioeconomic class, and about the tensions between old and new residents and poor and rich residents of a city and a neighborhood. Yet in those thousands of words there isn’t a single interview with a poor, long-term, black resident. It’s a glaring omission.

I’d like to add to that, because it’s an important oversight.  It’s akin to writing an piece about nightlife in DC, and then only interviewing your friends about the places in your neighborhood.  There are no interviews with neighbors, former residents who have been pushed out of the neighborhood, or really, anyone outside of Shani’s immediate peer group.   Those list-servs mentioned in the piece?  They are a treasure trove of information and comment from local law enforcement, church leaders, local community activists- none of whom are consulted in the article.   There’s no discussion of the different trends in gentrifying across the city (what’s happening in Bloomingdale and Columbia Heights is different from what’s happening in Hill East, H Street or NoMa, which is different from what’s happening in Anacostia and Congress Heights).  There is a nod to this in the opening paragraph, but that’s it.

…elite media consistently and systematically excludes the voices of the worst off. I don’t think that this is intentional; I think it’s a result of a confluence of factors involving visibility, accessibility, fear of appearing condescending, and worry about being in physical danger in poor neighborhoods. If we’re going to confront these questions responsibly and fairly, the journalistic class has to overcome that.

Many people conflate the DC metro area with DC proper the way Shani does. But life in these four quadrants can be very different from life in Annandale or Bowie (where, incidentally, I spent a significant part of my childhood).  Gentrification, by definition, deals with the influx of wealthier residents and the (often, but not always) displacement of poorer residents.  DC is being gentrified.  Metro DC is not: the demographic trends in the suburbs are very different from those in DC proper.  And it’s not just demographics. While the DC metro area might have been “largely insulated from the recession,” with a 6% unemployment rate, unemployment in DC is just over 10 percent.  Shani also says that “the number of families below the poverty line has actually decreased in the last three years.”  I’m not sure where those numbers come from*, but according to the DC Fiscal Policy Institute, poverty in DC dipped from 17.1% to 16.9% between 2007 and 2008, but has been rising since then.

I recognize that this is more of a first-person piece  — the title, after all, is “Confessions of a Black Gentrifier.”  I’m not sure what the confession is though, because the framing  of the piece leads me to think being a black gentrifier isn’t all that different from being a white gentrifier.  Gentrification anywhere is a complicated and nuanced issue, and gentrification in DC (in my humble opinion) is especially so, given the long, convoluted history of black people in the District and its peculiar politics.  Given the dramatic gap between the haves and the have-nots, it seems like there’s a lot of lip service paid to the idea that life for gentrifiers in DC is different from life for poorer residents. That’s often asserted with precious little consideration of those residents.  Freddie is right — according to this piece,  those people being displaced exist in the ether, outside of the realm of the gentrifier, black or otherwise.  Gentrification, at its core, is about privilege (Shani admits as much), and I take this as proof that privilege blinds, black or not.

UPDATE– Shani says those numbers come from the US Census’ 3 and 5 year American Community Surveys.  The DC Fiscal Policy Institute has the lowdown on why those numbers are misleading.