Know Your History: Dr. Teeth and the Electric Mayhem 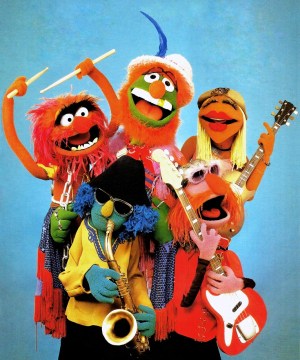 Look at Animal's pupils. He was totally high here.

Dr. Teeth and the Electric Mayhem were an interracial rock n’ roll band that broke racial barriers, headed by Dr. Teeth who was born of a black mother and green father.  Originally, the band was known for its edgy, raunchy lyrics; banned in the UK, their 1960 debut album, Fur in Your Teeth, featured such singles as “Make it Wink,” “Roll My Fuzzy Dice,” and “The Rainbow Connection (I’m Green, You’re Blue, Let’s Get Butt Naked and Screw).”  Though wildly talented, the group was hounded by turmoil and woe —Dr. Teeth fought a very public battle with alcohol and sex addiction and Animal, the drum player, was arrested several times on drug and stalking charges.

In an effort to clean up their act, the band accepted a gig playing on The Muppet Show, singing decidedly tamer songs (they revamped their “Rainbow Connection” song for Kermit to sing for a younger audience).  They have since disbanded, but there are rumors that Dr. Teeth is working with Mannie Fresh and President Obama on a collaboration entitled “We Do Big Thangs.”