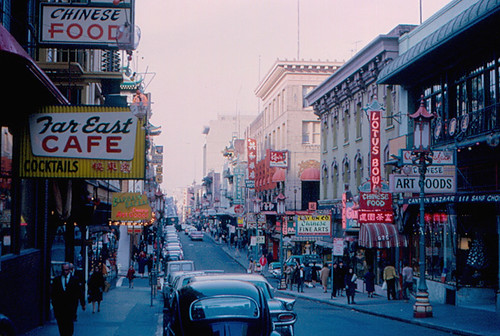 Immigration, both internally and internationally, has always played a huge role in the construction of whiteness in America --- which groups eventually are folded into whiteness, and which are kept out. San Francisco's Chinatown was created and sustained in part by discriminatory housing policies similar to those that created America's ghettos.

Last week, Jamelle, Ta-Nehisi Coates and Channing Kennedy of ColorLines got into a provocative exchange (across several blogs) about the evolving ways Americans think about themselves in relation to racial categories. (The initial post by Jamelle was sparked by a New York Times article that cited a growing number of young Americans eschewing starkly delineated racial classifications to self-identify as “mixed race.”) We had Channing on to flesh this out some more, and he posed a few big questions we’ve been turning over since.

But because we wanted to go to a really treacherous place, we had Tracy  (aka the hilarious BrokeyMcPoverty) on to discuss the politics of natural hair — specifically, a video making the rounds in which a woman decides to end her brief excursion into the land of the perm-less. (Choice line: “F*** rap, y’all can have it back!”)

Suffice it to say: we’re going to  really need your help this week, commenters.

PostBourgie: The Podcast – #15: The Beijing of America.

Latest posts by Podcasts (see all)