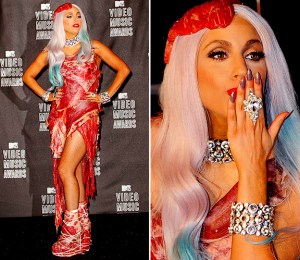 What does this mean?

“Well, it is certainly no disrespect to anyone that is vegan or vegetarian. As you know, I am the most judgment-free human being on the earth. However, it has many interpretations, but for me this evening … If we don’t stand up for what we believe in and if we don’t fight for our rights, pretty soon we’re going to have as much rights as the meat on our own bones. And I am not a piece of meat.”

Some things I’m clearly not meant to understand. But if Camille Paglia has a problem with Lady Gaga, that’s more than enough reason to root for her continued success.

2. WaPo’s The Fix highlights eight political races this fall that will play a huge role in the fate of redistricting. (Blackink)

4. Related: Eric Deggans has five lessons the media should learn – but probably won’t – from the coverage of hate-mongering, attention hounds like Pastor Terry Jones. (Blackink)

6. A recent poll says dissatisfaction with the federal government may lead to a GOP takeover … No surprise here; in America we vote for the class you aspire to be … and who doesn’t wanna be rich? (Naima)

7. Over in northern Afghanistan, Anna Badkhen of Foreign Policy reports that things are going south. (Blackink)

8. How the reaction to a dozen cartoons satirizing the Prophet Mohammed in 2005 set the template for the debate over the Park51 project. (Blackink)

9. The UN estimates more than 500 women have been raped in eastern Congo since late July. (Melissa A)

10. Earnest Withers, veteran photographer for the black press in the Civil Rights Era, doubled as an informant for the FBI. The Commercial Appeal (Memphis, TN) reviewed a number of reports that “portray Withers as a prolific informant who, from at least 1968 until 1970, passed on tips and photographs detailing an insider’s view of politics, business and everyday life in Memphis’ black community.” (Blackink)

11. A photo essay on MREs from around the world. According to the NYT, American rations of hamburgers, chili, peanut butter and candy, among other high-calorie goodies, are “fun.” (Nicole)

12. The EU has banned animal testing on great apes. (Melissa A)

13. A new study shows that some people are Filthy McNasties. Especially men. And especially at baseball games. (Blackink)

14. Prof Susurro on classism, racism, and Antoine Dodson. (Melissa A)

15. The federal appeals court in Atlanta has ruled there are no racial overtones when adult black men are called “boy.”  It’s an Alabama thing; we wouldn’t understand. (Blackink)

16. Our very own Jamelle highlights the increase in the numbers of grandparents who are raising their children’s children. (Blackink)

17. Trader Joe’s is still holding out on paying fair wages to farmworkers. (Nicole)

18. A Haitian visitor gives his take on America. “It’s so amazing how people can be so lonely in the U.S.”  (Blackink)

19. The success of  U.S. fast food chains in the Far East has China launching its own chains. (Naima)

21. No, Bollywood brothels do not exist. It’s a myth fueled by the prostitution-related arrests of a few Indian actresses. (Blackink)

22. Gabourey Sidibe is an Elle cover girl, sort of. (Blackink)

24. Via Sociological Images, A. J. Patrick Liszkiewicz argues that Farmville’s incredible success – it’s the most popular video game in the U.S. – may stem from politeness. (Blackink)

25. A University of Penn football player who killed himself in April appears to have suffered from significant trauma-induced brain disease. Owen “Thomas is the youngest and first amateur football player to be found with clear C.T.E., which is linked with cognitive impairment, depression and ultimately dementia.” (Blackink)