Blogging Mad Men: Season 4, Ep. 5, “The Chrysanthemum and the Sword.” 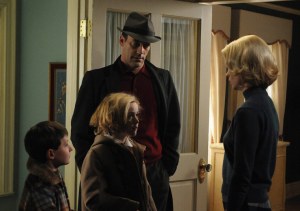 I understand there’s been some talk about Betty ’round these parts before.  Let me just go on the record as saying that I find Betty Draper to be a terrible human being and an utterly compelling character.  Her character was in classic form yesterday.  But we’ll get to that.

This episode opens with another appearance by a reporter, this time from the New York Times, asking about a rival, Ted Chaough, landing two of SCDP’s old accounts.  I supposed Don’s learned something from his initial interaction with reporters, and tells the Times guy “I’ve never heard of him.”  Pete has set up a meeting with the Honda motorcycle company, to the immense displeasure of Roger, who throws not one, but several glorified hissy fits about Pete’s “new yellow friends.”  In an attempt to learn more, Don takes Bethany to Benihana, where he runs into Ted, later complaining to Bethany “the minute he declared himself the competition, suddenly we were equal.”  Pete, smarmy and self-important as ever, reads The Chrysanthemum and the Sword in an attempt to understand the men from Honda.

Upon returning home, Don learns that Sally has hacked off all her hair.  (She’s also asked the babysitter if she and Don are sleeping together.)  This, to me, is the most interesting part of the episode.  Don’s travails at work and Bert’s admonition to Roger that “the war is over” serve to illustrate the old vs. new conflict, but I think the tension between Betty and Sally is what really takes the day.

When Don brings the kids home, Betty is in classic form.  She slaps Sally and sends her upstairs, screaming at Don.

In a meeting with the psychiatrist, Betty accurately points out that Sally started acting out when Grandpa Gene died.  She also, in classic Betty fashion, tells Dr. Edna that she thinks Sally is trying to punish her.  Dr. Edna suggests that perhaps Betty should see someone as well, and tells her that she will not discuss anything Sally says with Betty and vice versa.

I’ll leave it to others to delve into Roger’s intense hatred of the Japanese and Pete’s newfound cojones in standing up to Roger.  For me, this episode revolved around Betty and Sally.  Betty remains the most fascinating character on the show.  I think she’s jealous of Sally: Don loves Sally, stilted though his attempts to convey his affection are, and Sally seems to feel a freedom that I think drives Betty absolutely insane.  Sally represents the control Betty wishes she had over her life, and instead of celebrating it, she’s resentful and bitter.  She’s a bad mother all the way around, but is especially awful to Sally.  I can’t wait to see how this develops.  As someone tweeted last night, “Sally Draper, you seem the most adult of the whole lot. Betty is gonna flip when you burn your bra.”