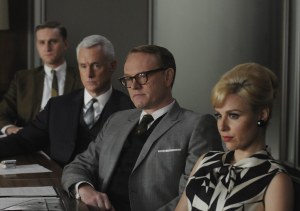 Apologies for the lateness of the recap- I had to watch this one again.

This episode begins to hit the crescendo of the story arc for the whole season: Don’s self destruction.  The real world keeps intervening on the neat little life he constructed.  Anna dies.  His assumed identity costs SCDP a major client, at the most inopportune time possible.  Finally rid of Betty, he’s now indebted to her for keeping his secret.  Midge has gone from boho good time girl to married junkie in need of a mark.

And Roger!  I’ve been on the fence about Roger this season.  I love his wit and sarcasm and general bon vivance (is that a word?), but it seems to all be going downhill fast.  He’s got his memoir (not as good as Ogilvy, and he knows it), his wife (not as good as Joan OR Mona, and he knows it) and he’s got SCDP (not as good as the original Sterling Cooper, and he knows it).  We saw Roger at his worst in his confession to Joan- I think she brings out both the best and worse in him, because Roger and Joan understand each other in a warped way no one else does.  I worry that Roger’s ready to throw in the towel, knowing that his lifestyle won’t change.  I think he genuinely likes advertising, and lack of awards notwithstanding, feels like he has a contribution to make.  This week, I think Roger is ready to give up.

I’ve mentioned how I am fascinated by Betty and Sally.  Sally’s relationship with Glen is interesting compared to his relationship with Betty, although Betty was and is (obviously) lacking Sally’s self-awareness.  I used to think Glen was substituting one for the other, but now I’m not as sure.  I found the scene with Sally at the psychiatrist rather chilling-the “control” the psychiatrist talks about seems to me to be Sally more or less shutting down around her family for the most part (partially on the advice of Glen, no less).

As for Don’s open letter in the Times, I think it was brilliant, and I respect Don for following his own advice and “changing the conversation.”

I have to admit, while I enjoyed this episode, I didn’t really feel like it was very nuanced, at least not in comparison to some of the others we’ve seen this season.  We’re being smacked over the head: shit hits the fan at SCDP, anxiety ensues, and everyone reverts back to core character traits.  We see (again) where the true power in Pete’s marriage lies. Roger is selfish and entitled.  Don tries to escape to the arms of various women, throws money at his problems, and makes an ill-advised decision that could (potentially) be brilliant. Betty is petulant and self-centered.  The 60’s!  They’re turbulent! Times, they are a-changin’!