If the Tea Party thinks you’re too racist for their ranks, where do you go from there? Has Sarah Palin found someone to replace her spokeswoman yet?

Those questions don’t have to be mutually exclusive, if you get my drift. 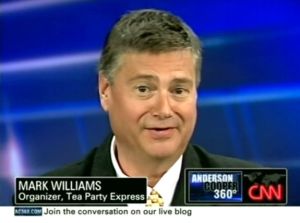 Also, I’m not going to bother making anymore jokes about “refudiate” this afternoon. The trend went from 0 to lame in about six hours.

Speaking of lame, how about this roundup?

1. First things first, take some time to read through The Washington Post‘s massive investigative project about “Top Secret America,” a system designed to keep the U.S. safe that has grown “so massive that its effectiveness is impossible to determine.” (Blackink)

2. Spencer explains why Muslims are under no obligation to reject a mosque at Ground Zero. (Shani-o)

3. According to the most recent numbers, Nate Silver predicts the Senate will convene in 2011 with “an average of 53.4 Democrats (counting Joe Lieberman and Bernie Sanders), 46.1 Republicans, and 0.5 Charlie Crists.” Meanwhile, Rebecca Kaplan thinks that Democrats need not fear the ghosts of the ’94 midterms. (Blackink)

4. Researchers in South Africa have found that a gel applied by women before and after sex can dramatically reduce the risk of AIDS and herpes. “It is the first time an HIV-prevention method controlled entirely by women, who bear the brunt of the epidemic in Africa, has been shown to work.” (Blackink)

5. Jaclyn Friedman muses about Al Gore, sexual assault and what the media should have done with the story. Here’s the Portland Tribune‘s take on things. (Blackink)

6. Mississippi Public Radio will no longer host Terry Gross‘s “Fresh Air” because her voice is too sexy, and she uses it to talk about sexy sex with sexy guests. (Monica)

7. The Arpaio approach to immigration could lead to a surge in violent crime. But you probably already knew that. (Blackink)

8. Among tea partiers, tax cuts are always the answer. (Blackink)

9. Pharyngula explores the idea of interpreting the Bible as a metaphor rather than “a literal description of a hallowed reality.” But PZ Myers acknowledges that doing so “rips the heart right out of Christianity, and makes central dogmas of faith untenable and painfully ridiculous.” (Belleisa)

10. Pema Levy argues that gun control laws need to become a feminist issue. (And if you don’t believe her, check out the comments where gun advocates argue for a perversion of feminism, insisting that women should have guns so that they can shoot their abusers…and that somehow, that will make everyone safer.) (Shani-o)

12. Pulitzer Prize-winner Lane DeGregory revisits the grisly tale of a teen boy, the two girls that loved him and their final bloody – and fatal – confrontation. (Blackink)

13. The family of a Houston-area firefighter who died in a recent blaze is fighting to keep his widow from collecting his death benefits, arguing that the 37-year-old fire captain left her after finding out she was born a man. (Blackink)

15. Who cares if you can get high-energy ethanol from corn when corn isn’t truly sustainable? (Shani-o)

16. Your employer is probably totally illegally not paying interns in exchange for dubious college credit. (Monica)

17. The Guardian breaks down the slow reading movement. (Belleisa)

18. A small sample of whitewashing in Hollywood. (Missing: Liz Taylor as “Cleopatra”, Natalie Wood as Maria in “West Side Story”, Mickey Rooney in Breakfast at “Tiffany’s”…) (Shani-o)

19. Over 3 years, the RIAA spent about $64 million in legal and investigative expenses to recover about $1.4 million. That’s budgeting that would embarrass even MC Hammer. (Blackink)

20. When book covers go bad, or better, when publishers hope to profit off of brand confusion. “Jane Eyre” is totally about vampires right? (Belleisa)

21. How Terry Kniess outsmarted everyone and made the perfect bid on “The Price is Right.” (Blackink)

22. Donald Glover is Childish Gambino. Because he doesn’t have enough jobs, apparently. “People were asking, ‘Why’s his voice so high? Why is he rapping about Tina Fey? That’s not going to get you any street cred … Rapping was just something I liked.” (Blackink)

25. And because we haven’t talked about LeBron nearly enough, Michael Jordan remains a grumpy old man. Kelly Dwyer of Yahoo! Sports says LeBron made the right move. Also, Yahoo! offers an inside look at the Heat’s free-agent coup. (Blackink)

You know how we do it; share, whine or say nothing at all.