As part of a study conducted over a couple of minutes in the employee cafeteria and during a smoke break in the parking lot, The Washington Post concluded recently that “most women … cross their legs when sitting.” 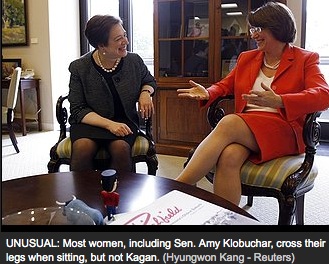 Everyone knows that a proper lady crosses her legs at the ankles or sits with her knees pressed together – so as to ward off those gentlemen and ladies with impure motives.

Givhan, get your shit together. Please.

If you can stomach watching the slow death of the Gulf and the coast, here’s a live feed of the oil spill. The Infrastructurist explains how it all happened, literally. Also, Mac McClelland of Mother Jones is live-Tweeting from the Gulf Coast, providing a glimpse into the scope of the destruction. (Blackink)

If the dateline is from South Carolina, then you know what follows likely involves equals amounts of sex and stupidity. Today, GOP gubernatorial candidate Nikki Haley is making headlines after a conservative blogger claimed they had an “inappropriate physical relationship” seven years ago. Haley has denied those claims. (Blackink)

On a somewhat related note, GQ has a D.C.-focused list of the 25 “greatest” political philanderers in U.S. history. (Blackink)

Mark Zuckerberg, founder and chief executive at Facebook, published an op-ed in the Washington Post today about his company’s privacy policies. Rachel Sklar of Mediate thinks the Post let Zuckerberg off the hook. “Letting Zuckerberg and Facebook get away with such a non-rigorous response to this issue was a real fail. WaPo should have demanded more. Instead, it basically published a press release.” Chris Rovzar at the Daily Intel doubts that Zuckerberg is truly sorry. And Mark Cuban, in a more general blog post about Facebook and privacy issues, doesn’t see what all the fuss is about.  (Blackink)

The net worth of U.S. presidents. Takeaways: Jefferson was balling; Lincoln was a relative pauper; Kennedy didn’t live long enough to inherit his family’s estate, estimated to be about a $1 billion; Clinton is worth more than Dubya; Obama is worth about 5 mil — mostly book money. (G.D.)

In Texas, the right wing-dominated School Board of Education pressed forward with their plans to rewrite history. Newsweek has a list of the “10 silliest changes” to the state’s textbook standards, including explaining “how Arab rejection of the State of Israel has led to ongoing conflict.” Also, mistermix at Balloon Juice points out that hip hop will not be listed among the nation’s influential musical and cultural movements. (Blackink)

Nearly 60 percent of the kids in Detroit Public Schools who tested below grade level on standardized tests also had higher elevated levels of lead. “The higher the lead levels, the lower the MEAP scores, though other factors also may play a role.” (G.D.)

Related: PBS looks at where Detroit’s schools stand a year after they were taken over by the state of Michigan, and the results aren’t too reassuring. The system faces a $300 million-plus deficit, and only three percent of fourth-graders scored as proficient on a national math test. (G.D.)

Jamaica has declared a state of emergency in portions of Kingston – the nation’s capital – after supporters of a well-known drug lord, the aptly-named Christopher “Dudus” Coke,  set up barricades and promised to fight authorities who came in search of him. Some residents have been sharing their stories with BBC News. (Blackink)

On what would have been Sean Bell’s 27th birthday, a three-block stretch of Liverpool Street in Jamaica, Queens, was officially renamed Sean Bell Way on Wednesday. (Blackink)

Chris Faraone of the The Boston Phoenix details the final days of hip-hop heavyweight Guru and his odd relationship with Solar, a friend, business partner and music producer. “The Phoenix spoke to more than a dozen people in Guru’s universe, and a strong consensus emerged that the relationship between Guru and Solar was at best emotionally oppressive, and at worst physically abusive, with Guru allegedly being tormented by his so-called friend. One former bandmate calls Solar the closest thing I’ve ever seen to true evil.'” (Blackink)

In a unanimous ruling today, the Supreme Court rejected the NFL’s claims that it has “across-the-board immunity” to antitrust law and ruled that the league must be seen as 32 separate teams and not a single entity. Doug Farrar calls it a “major win” for the Players Association, which is seeking a new collective bargaining agreement.

If you like sex, coffee or sleeveless shirts, among a number of other things, then you’re probably not cut out for Brigham Young University. (Blackink)

And President Obama thinks LeBron James would look good in a Chicago Bulls uniform. Sure he does. But if you’re really curious, he looks spiffy in all of them. (Blackink)