Home » Browse PostBourgie » On Creative License and The Hurt Locker.

On Creative License and The Hurt Locker. 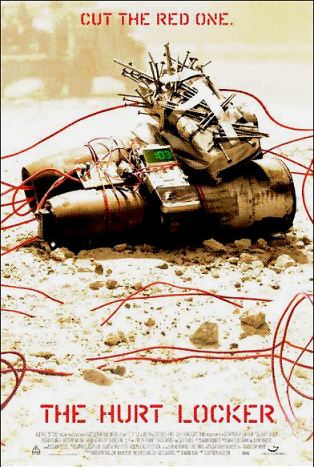 *For those who are ridiculously late (like myself) and haven’t watched  it yet, there are spoilers ahead. Consider yourself warned.

Along with the Oscar buzz surrounding The Hurt Locker there has been another conversation taking place – civilian impressions of the film versus those of military personnel and veterans.  A scathing review by Iraq War veteran Kate Hoit touched off a debate concerning factual inaccuracies in the film ranging from the uniforms the soldiers wore to tactical implausibilities:

No, the Explosive Ordnance Disposal (EOD) team would not roll out into the middle of Iraq practically by themselves. “The Hurt Locker” made it seem like the EOD team were taking on the streets of Baghdad; just them against a world of improvised explosive devices. However, this is when I realized the scriptwriters were lazy. This movie is a full-throttle adrenaline rush that is comprised of ditching common sense and the realities of war. The writers did not attempt to formulate a story based on the actual job of an EOD soldier. Instead, they created a war junky, sniper, commando guy who relied on no one (and no radios?) and stressed-out everyone around him, including those watching the movie.

While I watched that scene I automatically thought, there isn’t a soldier in the world who would leave their base and run through Baghdad unless they were trying to commit suicide. I laughed out-loud in the theater — could anyone actually believe this? When James finally reaches Camp Victory, a sympathetic soldier on guard-duty lets him on base. So, let me get this straight. We have an American soldier running through Iraq in a hooded sweatshirt, trying to find out what happened to a kid who sold bootleg movies, and a sweet soldier who just lets James waltz on base? Bravo Hollywood; that was pure magical bullshit.

What followed was a volley of opinions from veterans, some agreeing with Hoit’s view that the inaccuracies made it impossible for them to enjoy the movie, while others disagreed, stating that while liberties were taken the film is an accurate rendering of the sensory experience of war and military culture. In an interview for the Jacksonville Movie Examiner, Lt. Jason Dozier discusses his frustrations with The Hurt Locker, and ultimately says he would not recommend it to military personnel:

To non-military folks, sure. A lot of folks have liked the movie for reasons you stated before and I can’t knock it. Just my own personal biases made the film hard to watch, so to answer the other part, definitely no. (laughs) In fact, me and my boys have been talking about seeing this movie for a while, but we haven’t been able to because of the limited release, and I’ve straight up told them not to see it for the reasons stated before.

The debate hasn’t been so civilized in other places though, particularly movie review forums. In this “Pass The Popcorn” thread on Okayplayer the argument gets ugly, with some veterans stating their issues with the film and civilians replying “It’s not a documentary, get over it” or “Newsflash: It’s a movie.”

In the wake of all this I have a few impressions and a couple of questions. I just watched the movie last week, but I didn’t read any of the reviews or articles until after I had watched it. Also, despite being a civilian I am in close contact with a veteran hence I can’t always claim to be 100% objective. That being said I don’t think The Hurt Locker was bad. In fact it was all of the things a lot of other people said it was – tense, suspenseful, visually realistic and well-acted.  However, there were parts of it that did annoy me. Sergeant James drove me crazy because I thought his actions and the repercussions of them were unrealistic. There were things he did that were too foolhardy and reckless for me to swallow even though it was a movie. I thought the idea of him running around Baghdad alone at night was ridiculous as was the decision to have his team-members run into dark alleyways and split up Scenes such as the one at the desert bunker may have been inaccurate but they seemed more believable and tension filled for me ( I got jumpy in a scene with sheep coming over a ridge, I was so shook) because I didn’t feel like I was being manipulated, whereas the two aforementioned scenes seemed contrived. There were some wonderful subtle moments in the film especially those portraying Sergeant James’ attempts to reintegrate himself into civilian life. He seems utterly lost standing in the cereal aisle at the supermarket and his pent up rage and restlessness are palpable. You can very nearly feel him wanting to pull all the shelves over. But  then again, that was only the last 10 minutes of the movie.

1) Is The Hurt Locker meant to be an action movie or a war movie?

If it supposed to be an action movie is most certainly does its job and is quite enjoyable on that level. You’re on the edge of your seat. People get shot. Things blow up. Viewed like that factual inaccuracies need not matter that much – the main aim is to try to create a certain feel and reaction in the audience. However, if it’s meant to be a war movie then the inaccuracies do matter because it’s an attempt at recreating the actual lived experience of the estimated 2 million individuals who have been deployed to Iraq and Afghanistan since 2001. In my mind The Hurt Locker hints at wanting to be viewed as a war movie with the preface “War is a drug.”  but the events the follow in the movie speak more to the individual experiences of Sergeant James rather than the collective feelings of soldiers.

2) Does The Hurt Locker have an intended audience? Does that matter with respect to issues of factual accuracy?

When discussing this before I watched the movie I broached the idea of military personnel and veterans not being the intended audience. I have read some impressions from civilians saying that they feel they have better understanding of what the experience of being in combat is like and the psychological realities of soldiers after watching the movie and I didn’t even know of the existence of EOD personnel prior to watching which I’m sure is true for others. Despite all this I am still torn about whether this means that dramatic license should allow for the making of a movie that relies on elements that offend members of the very group of people it is supposed to give us greater understanding of.

3) Where are the limits of creative license?

When dramatizing something that actually happened where is the line concerning what parts must be factual accurate and the parts where you have some wiggle room?

And now, since you guys are way smarter than me, have at it. What do you think?