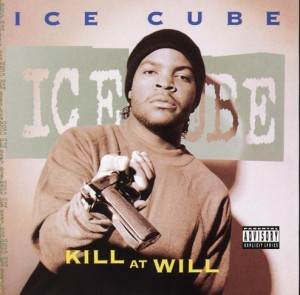 First, I should shout-out the dude on Urban Dictionary who already said this better than I can:

One of the greatest Mc’s of all time. I dont know what you fuckers are talkin about. You think you’re funny with your little acting jokes, but the truth is, if his acting were half as good as his mic skills, he’d be winnin Oscars.

So yeah: kill the Are We There Yet? jokes, take off that silly ass fedora, put your De La Soul Is Dead or whatever on pause for a few minutes to acknowledge that Ice Cube is the MACK and that no, you can’t fade him:

I heard payback’s a motherfuckin nigga!

Tell me this isn’t the hardest opening line to any album in the history of music. I was two years old when that album dropped — May 16, 1990, back when Hammer was still rocking crowds and the older, whiter George Bush was still president.  The first time I listened through that joint from intro to end was over winter break in my sophomore year of college. I heard payback’s a motherfuckin nigga! — I remember I was lying on the couch or whatever when I first heard that line; it felt like someone had just tazered my earlobe. I never tell you to get down; it’s all about comin up. Yeah, Nas is deep, and we know that Black Thought is the smartest brother at the dice game, but Cube’s first two solo albums are some of the realest:

You wanna be the big fish, you little guppy;/Black man can’t be no yuppie./You put on your suit and tie and your big clothes;/You don’t associate with the Negroes./You wanna be just like Jack,/But Jack is callin you a nigger behind your back./So back off, genius;/I don’t need you to correct my broken English.

Every time I wanna go get a fuckin brew,/I gotta go down to the store with the two/Oriental, one-penny countin motherfuckers;/They make a nigga mad enough to cause a little ruckus,/Thinkin every nigga in the world’s out to take,/So they watch every damn move that I make;/They hope I don’t pull out a gat and try to rob/Their funky little store but, bitch, I gotta job.

Don’t let me catch Daryl Gates in traffic;/I gotta have it to peel his cap backwards./I hope he wear a vest, too,/And his best blue,/Goin up against the Zulu.

verses that anyone has ever spit on a record. Yeah, 70% of his early work is impressively offensive to countless groups of human and plant life, but A Bitch Iz a Bitch is still a golden, nay, platinum track.

[I’m at a loss, really, because nothing I write beyond this point is going to read better than if I simply quoted Cube’s first four albums for the rest of this post. I could copy and paste the lyrics from ‘Us’ and ‘We Had to Tear This Mothafucka Up’, drop my laptop, then just walk away, and this would still be a crazy awesome, Top-Five-On-Your-Hard-Drive blog entry.]

If Illmatic is hip hop’s preeminent album, then Kill at Will is its reigning EP — and I love Illmatic as much as the next wannabe-Huey Freeman, but there isn’t a single track on that album better than ‘The Product’. Cube earned hero status in my book once he learned to out-Chuck D Chuck D. Death Certificate is the rawest expression of black pride and Black Power ever set to bars and hooks. Give the man a Pulitzer.

Ice Cube is probably the only rapper in history who sounds better without a Dr. Dre lozenge. Eric B. and Rakim were great together, yeah, blah, blah I’mma let you finish but Sir Jinx and Ice Cube were the world’s greatest tag team since Blucher and the Duke of Wellington. These guys dismantled N.W.A. over a Biz Markie sample, yet Kanye’s the savant? Fuck outta here.

For my sake, I like to pretend that Ice Cube was assassinated in 1996. This way I convince myself that the Westside Connection never really existed, and that Common never sonned him over a Pete Rock beat, and that what we’re left with is:

I could die with that discography; it’s much better than having a bunch of collaborations with Puffy stuck in your catalog. And now? the man writes and directs corny, aspirational projections of black families living frivolously and having white people problems. I respect that, okay? In my mind, Ice Cube lives on as that “crazy motherfucker from around the way.” He’s the Stokely Carmichael of hip hop, and you know this, man.