[My Momma Loves Me.] 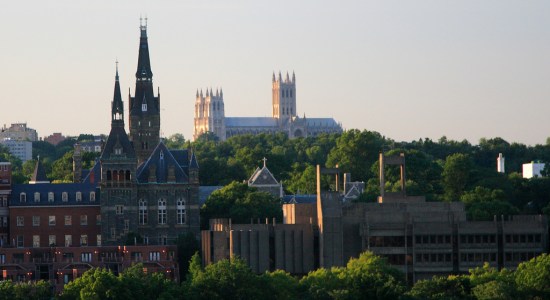 “I just don’t think it makes much sense,” he shrugged. “His college is paid for; he can go anywhere he wants to go, anywhere in the state. I’m not dishing out forty-two thousand dollars so that–”

Yes, that was the plan, until one particular acceptance letter invited the present furor into his home. The shouting downstairs had torn into his dreams; now the boy couldn’t sleep.

Fair enough; one day his son would finish college with a mass of student debt strapped to his shoulders, and he would most likely not know what to do or where to go or how to pay.

He spied them both from above, crouched at the top of the stairs in the darkened hallway. Eyes rolled, voices rose; they sat poised against against each other, flinging epithets and objections from the two love seats at the corners of the living room.

The boy wanted his father to smile and understand, and to know that he would pay — that he was/would be a man. He didn’t know for sure, but he prayed. His mother had taught him that sometimes, all you can do is pray. Every day he knelt and whispered in his room.

Mother knew best, the boy thought, but she couldn’t, wouldn’t win this fight with his father. He was sad, and his mother was mad, and his father was right. He couldn’t afford Georgetown, and maybe he’d never leave the discomfort of home.

But he could!But he could! Mom told him that he could, and he’d believed her. “We’ll work it out…it’ll all work out.” He was happy then, but now his parents were shouting — first over the phone, but now, finally in person, for hours into the early morning.

He cried and smiled and sniffled and cheered for his mother from the shadows upstairs.

“You can’t do this to him,” she lobbed her outrage into his ego. “He wants this. He’s always wanted this, and you knew that! I don’t know how we’re going to do this, okay? I don’t know what else to say…”

She didn’t know what to say, and she didn’t care; she’d stopped listening hours, days, years ago, really. Her son would go to college, wherever he pleased, and she would stand as an immovable object against the irascible force of his father.

Silently, she cast a plague upon him. She no longer needed words; her anger waned. She cried. Mom kept her thoughts and a heart full of love.

His father shouted her down, again, knocking some unspoken defense of their son that she no longer bothered to utter. The young man spied his parents from above as they sparred into the sunrise. He hoped, wanted, cried, prayed, smiled, sniffled, cheered. He loved his mother, she loved him, and that was all.