Home » Browse PostBourgie » On The Verge of Productivity.

On The Verge of Productivity. 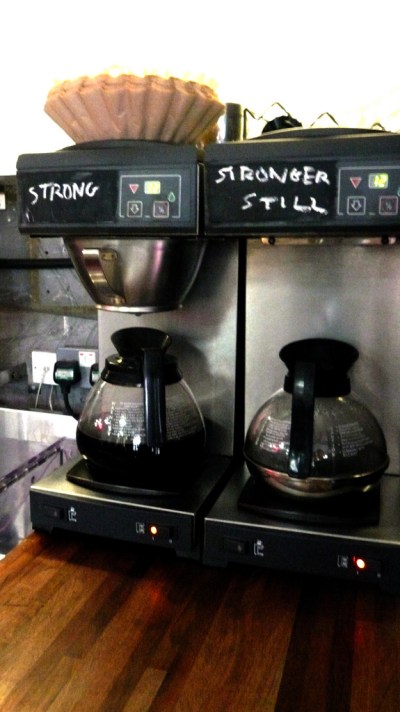 Every yuppie knows the mural in all of the Barnes & Noble stores; it’s a wall of Anglo authors (and of some random nigga smoking a pipe that looks like the smallest possible saxophone) sitting, looking pensive, unkempt but well dressed. I, too, could become a great writer by drinking wine midday and growing a beard and never getting laid, but fuck that; I must hustle.

Staring into my laptop. I know I shouldn’t be wasting money on the overpriced food they sell at the counters in these paradise neighborhoods, so I’m munching from a box of dense wheat crackers that I brought with me from the apartment. My keyboard is greasy, shiny and gross. Oddly greasy crackers crumbled all across the table.

A white girl just ducked under the table to plug her charger. She’s got high, tight grey shorts; this chick is dressed for spring, but it’s misty and miserable outside today. She’s still wiggling at my knee; a few shreds of wheat shake from the table’s edge down onto the small of her back. I stare back into Microsoft Word.

“Thanks, sorry about that,” she pops up and winds her way back to her side of the café; the backs of her knees wink at me.

I’ve got to get out of here.

I’m in a bakery now – a bakery café. It’s apparently a slow day, so no girls in cutoffs or other such distractions. I thought they might have internet here as well, but there is none, which is good for me really because I need to “get some writing done.” I say that a lot these days, ever since graduation. Alright, man, I gotta go get some writing done. That’s kid writer talk for: I must go write the next great novel now, but I’ll meet you for coffee at 10am tomorrow.

I’m listening to a This American Life podcast about historically notable pen pals. (“Noriega, it has to be said, was a very good pen pal.”) One of the speakers in the segment, a history nerd ex-speechwriter from the Clinton White House, began with a story about how John Winthrop banished Roger Williams from the Massachusetts colony but then kept up correspondence with Williams as he went off to found Rhode Island. Every month, Williams was like, It’s hard to start a colony, the colonists suck, and Winthrop was like, I know, right?

The segment host is talking about how the conversations of this decade’s younger generations are generally vapid because people communicate freely, so casually, with so little forethought. I think he’s right: in the course of a year, I’ve tweeted a novel’s weight in words with minimal effort or attention to detail. More persistent tweeps have at least outdrafted David Hume by now in sentences-per-lifetime. But who’s editing all of this crap? Back in the day, even God needed editors. Modern grown folks agonize over cover letters, but that’s about it.

On a sharp, bright laptop display, book reads like a dead word. Still, I figure that if I remove myself from the internet entirely – from my blog, from Facebook, from the social media circus – maybe I could write something worth selling instead. I read an item on Gawker about “the Web 2.0 Suicide Machine,” where you can feed all of your web logins to an application that will then lock you out of your accounts – forever. Ten years ago, you’d have had difficulty trying to explain the point of that service, but now hypertext is the great, familiar siren of Western thought.

My own writing is mundane, but it has taken me a few hours to write these several paragraphs, and that’s a sort of discipline, I think. One day, maybe in the near future, my computer will crash, and it won’t matter to anyone else that I’ve spent so much time writing all of this, but it will matter to me because I will have had my chance to vent into this monitor. Everyone needs to vent some way or another.

“Sir, would you like to start with some coffee, or maybe something to eat?”

Today’s exercise may be a waste of words, and now I’m paying for the privilege to sit around and type them. Barnes and Noble doesn’t mind if you lounge at their stores all day without buying anything, but anywhere else will bully you back out onto the sidewalk. A pot of coffee here at the bakery is fairly cheap, though, and it’ll buy me a couple of hours at a table away from my sister’s living room floor.

Right, no more distractions: I’ve closed my browser and shut off my wireless connection. My nigga Ice Cube is thumping loud, creative hatred through my earphones. Indoors, under dim lights on a rainy day. I’ve got to get some writing done. I think I’ve got a story to tell.