Shamefully enough, I had no clue who Percy Sutton was or why he was important until I stumbled across his obituary on page 3A of my local newspaper.

And though I’m usually wary of venturing into hyperbole, the Rev. Al Sharpton is not too far off in summing up the incredibly interesting and distinctive life of Sutton:

“He was at the forefront of everything you can think of in black America,” Sharpton told CNN. “He was the quintessential black American. He pioneered black business, black media and black politics. He opened those doors and he kept them open.”

Now, I’m not sure where Black America is located on the map – I generally assume it’s close to the Equator, has a lot of palm trees and owes somebody a lot of money. 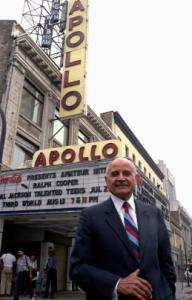 only succeeds in making the rest of us seem inadequate.

He was an attorney who represented Malcolm X. He served with the Tuskegee Airmen. He served in the New York State Assembly before taking over as Manhattan borough president. He was a political mentor for the Rev. Jesse Jackson’s two presidential campaigns. He was owner of the first black-owned radio station in New York City. He bought and renovated the Apollo Theater, meaning he’s partially responsible for making Kiki Shepard and the Sandman household names. He taught Jackie Robinson how to hit a curveball.

Ok. I made that last one up.

However, reflecting on Sutton and my previous ignorance of him makes me re-think some of my prior reservations about Black History Month. It sorta reminds me of Shani’s post about John Hope Franklin (if you read the comments, you can see I was saying the same thing about him).

There’s clearly a need to educate people about the contributions of black Americans beyond the “I Have a Dream Speech” and Dr. Carver’s promotion of peanuts. And while I don’t want “black history” ghettoized, I don’t want it ignored either.

I’m just not sure how we get there. Can we fit in a few more references to Sutton in 28 days? Or should we hope that historians eventually see the value in integrating the overall historical narrative of this country?

It’s clear that a month  isn’t enough. But I’m not sure it’s something to just laugh off either.