TMZ has supposedly unearthed an image from the mid-1950s of then-Senator John F. Kennedy lounging on a boat with at least four naked ladies.

And if you look closely, you can see Bun B and Gloria Velez in the picture: 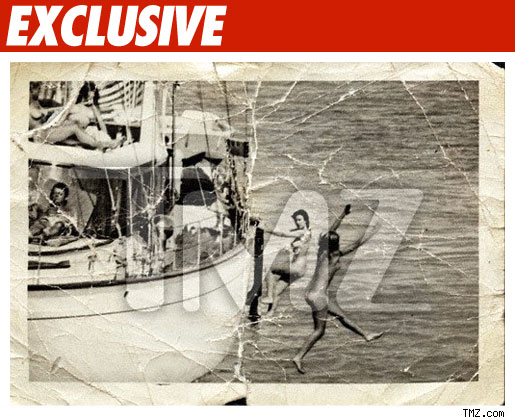 In the meanwhile, you all should applaud G.D. for doing the yeoman’s work of rounding up these terror-related links. All I had was some bad jokes about going to the airport and a link to this video (you will learn to respect Remy Ma, dammit!). And, as usual, randomness:

1. Umar Farouk Abdulmutallab, the Nigerian man accused of trying to blow up Northwest Airlines flight 253 over Detroit on Christmas Day, is scheduled to appear in court today. As has been widely reported, Abdulmutallab’s father – Nigeria’s former economics minister – alerted U.S. officials about his son’s radicalization. He was then added to an official “to watch” list, which has more than a half-million names (an example of having too much information to be actionable or useful.) Abdulmutallab had applied for a British student visa earlier this year, but his name raised enough red flags that officials rejected his request, and he was banned from entering the country. His parents have offered to help authorities. (G.D.)

2. The device he was trying to use was made of PETN, a powerful nitroglycerin-like explosive that is difficult to detonate. It’s the same one Richard Reid, “the shoe bomber,” tried to use in December 2001. Passengers recounted the events on the plane, as did Jasper Schuringa, who is the guy who reportedly stopped Abdulmutallab. (He’s apparently willing to tell his story in exchange for a little remuneration.) (G.D.)

3. This morning, Homeland Security Secretary Janet Napolitano walked back some unwise comments she made yesterday on ABC’s “This Week” in which she said the plot’s failure was evidence that “the system worked.”Joe Lieberman – you should just roll your eyes whenever you read his name at this point – is calling for some kind of unspecified pre-emptive action in Yemen where Abdulmutallab apparently was trained and equipped for his attack. Marc Ambinder says that Obama’s low-key response – he hasn’t canceled his vacation, or made a statement yet – is part of a larger strategy to turn down the temperature on this issue and to not give a foiled bomb plot any outsized importance. (G.D.)

4. Mexico joins other countries and provides female-only taxis to keep women safe. Cool, but why do they have to be pink? (Quadmoniker)

5. Tom Schaller reminds us that passing a healthcare reform bill was a victory for liberals and not a defeat, as seems to be the driving narrative in some mainstream media reports. Also, Senate Minority Leader Mitch McConnell will not commit to campaigning on a platform of repealing of “Obamacare.” Punk. (Blackink)

6. Paul Krugman suggests we refer to the past decade as the “Big Zero.” (Blackink)

8. If you’re interested, the Rev. Jesse Jackson shared his thoughts about Obama’s first year with The Guardian. *I’m cataloguing opinions on Obama from every famous black man ever. If you come across any others, holla at your boy* (Blackink)

9. Among others, conservatives Mary Matalin and Ann Althouse went through great pains (lying) Sunday to whitewash President Bush’s disastrous record on homeland security and everything else. (Blackink)

10. While reflecting on our federal government’s former ambitiousness in the fight against poverty, Leigh Graham makes a wish for the New Year. (Blackink)

11. Pity those unfortunate souls in California. Listen, and understand. That Terminator is out there. It can’t be bargained with. It can’t be reasoned with. It doesn’t feel pity, or remorse, or fear. And it absolutely will not stop, ever, until you are dead. (Blackink)

12. Why Dave Weigel dares not speak Sarah Palin‘s name. In short, “She is allowed to shape the public debate without actually engaging in it.” (Blackink)

13. A high school teacher in Connecticut was offended by girls wearing blackface for Halloween, and spoke to them about it. Then, an administrator asked the teacher to go home for the rest of the day. The administrator said she “received no ‘validation’ the costumes were offensive.” Investigation is continuing, and other teachers say the administrator just ignores anything that comes up about race. (Quadmoniker)

14. With men and women serving side-by-side in war zones more than ever before, the military is changing the way it deals with sexual harassment and sexual assault. And it’s still not nearly enough. (Blackink)

15. Against all logic and available information, abstinence proponents are still hoping that health care reform means millions in more aid for their ineffective programs. (Blackink)

16. Travis the Chimp gets a nod in a year-end retrospective from The New York Times. Now can we finally close the book on this poor, tortured animal? (Quadmoniker)

17. In case you haven’t heard or read about it, the Boys Choir of Harlem is no more. (Blackink)

18. The least essential albums of 2009. And Bill Cosby makes an appearance. (Blackink)

19. Poor Roman Polanski. Trapped in his miserable oh-so-awesome prison-like Swiss chalet, he needs help responding to the overwhelming “number of messages of support and sympathy.” Won’t you help him? (Blackink)

20. “The Tyra Banks Show”? Done. I never watched it enough to know whether this is a good or bad development. (Blackink)

21. Now that no one cares anymore, here’s a couple of Tiger Woods-related links: one study estimates that shareholders of companies that he endorses lost as much as $14 billion in wealth since his car accident on Nov. 27 and Mike Wise of the WaPo offers a very personal take on Woods’ troubles. (Blackink)

22. Remembering Olympic sprint champion and world-record holder Usain Bolt, who made track interesting for the first time in at least a decade. (Blackink)

23. Bob Kravitz of the Indy Star makes the case that the Colts could come to rue throwing away a chance at perfection. “In the end, this doesn’t make the Colts any more or less well-equipped to handle the coming postseason.” (Blackink)

24. Urban Meyer, possibly the best college football coach of the past decade, had something of a mid-life crisis over the weekend. (Blackink)

25. And finally, Spike Lee directed the awesome new video for Michael Jackson’s latest release, “This Is It.” Enjoy:

Until the next time, have a great week and let G.D. educate you on some of the lesser-known precepts of Kwanzaa.

From Noam Scheiber, MBA culture may be bad for reviving US manufacturing sector: “On the other hand, it’s hard to believe that American manufacturing has a chance of recovering unless business schools start producing people who can run industrial companies, not just buy and sell their assets.”

Britain will be offering talking therapy to the unemployed … hmmm.

The artist Katie Paterson went to Iceland and recorded melting glaciers using three records made of ice. Then she played all the records simultaneously until they melted. Listen to it here. It made me have to pee. (via) http://thejailbreak.com/2009/12/01/ice-ice-baby-katie-patersons-ice-records/

Heather Havrilesky says the 15 great television shows of this decade were like “great novels.”