A (Ridiculous) Case for Conformity. 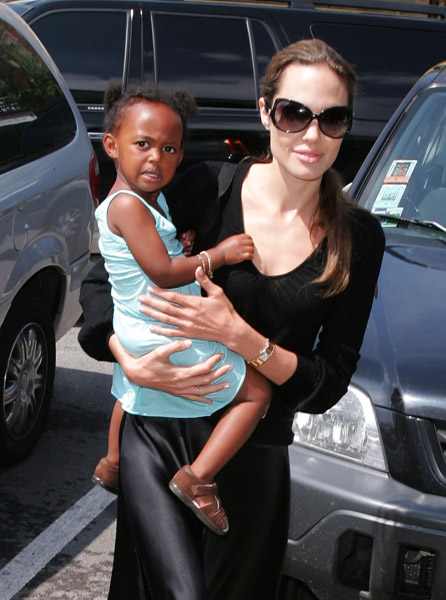 Latoya goes in on the second (yes, second) absurd Allison Samuels piece in Newsweek complaining about Zahara Jolie-Pitt’s “wild and unstyled, uncombed and dry” hair. In her pieces, Samuels argues that the “bonding” experience black girls have with their mothers while getting their scalps greased and hair braided is invaluable, and that having their hair “well-managed” provides girls with “pride, dignity, and self-respect.”

After pointing out that though the Ethiopian-born Zahara is black, she’s not African American, and isn’t living the cultural experience that Samuels is applying to her, Latoya writes:

The styles of childhood do not continue into our preteen years, the age when black girls normally get their first relaxers. Does [Samuels] have fond memories of her mother basing her scalp before she applied the chemicals that would straighten her hair? Or is that a ritual that is just understood as a part of growing up? Are her memories scarred with the taunts of other children? My cousins came home crying after being teased about their “beady-beads” and their “kitchens.” And who did the taunting? Many times, it was other black students. We need to stop encouraging conformity and hair hatred, because there is a logical end to the path we are walking down. Instead of fighting each other when someone’s hair doesn’t conform to our specific ideals, wouldn’t it make more sense to fight against a racist system that penalizes and politicizes certain hair styles?

In addition to co-signing all of the above, I’d like to add: eff outta here. Samuels reminisces fondly of a time when she sat between her mother’s knees, but from what I hear from friends who went through the ritual, it’s not a pleasant experience. When my sister was visiting recently, it was difficult for me to watch her braid her daughter’s hair; as my sister detangled my niece’s hair, Nili would frequently let out exaggerated cries of pain, which merely annoyed my sister. The struggle there didn’t seem enjoyable for either party.

Samuels ends her second piece with the weaksauce statement: “I’m not a member of the Jolie-Pitt household, so I can’t assume to know their thought process or intentions. But one thing I do know is that girlie girls usually like to have their hair combed*.”

I don’t know if Zahara is a ‘girlie girl,’ whatever that means, but she is a child. And children like to be free. Why impose racially skewed, conformist standards on her? And moreover, this statement: “To many, she’ll be just a black little girl—and a black girl with bad hair at that” says more about the author than the army of straw men she’s constructed. By couching her argument in terms of what others think about a black female body, Samuels is making the age-old argument that conforming to someone else’s standards is somehow freeing for the conformist. This is an argument, which, to me, seems stunningly counter-intuitive.

Hair comes with angst for many, many women (the majority of the world doesn’t have straight hair), but, speaking for myself, I know that conforming doesn’t alleviate that angst.

In the last year-and-a-half, I’ve grown a full head of multi-textured (coily, kinky, and wavy) hair that goes out and up rather than down. In fact, just yesterday I tweeted: “Coming to terms with the fact that the hair on top of my head is just always gonna look like someone took an afro pick to a poodle.” Despite the silliness of that statement, I’ve never been happier or more confident about my appearance. My only regret is that I wish I’d always had access to my natural hair, instead of being relaxed since before I can remember and spending years chasing the ‘white girl flow.’

*True fact: despite being called ‘girlie’ by the proprietor of this very blog, I haven’t ‘combed’ my hair in weeks. Does that mean my hair is unkempt? No, it just means that I recognize that tools designed to arrange straight hair wreak havoc on my coils and curls — they cause breakage and disrupt my curl pattern — and I avoid using them.

**I know you can’t really see her hair in this picture, but her face mirrors my expression at reading Samuels’ columns.