Home » Browse PostBourgie » Book of the Month: The Blind Side by Michael Lewis.

Book of the Month: The Blind Side by Michael Lewis. 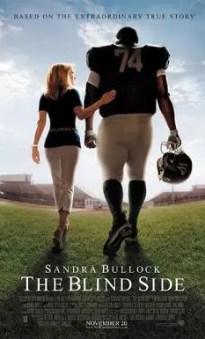 This month we’ll be reading The Blind Side by Michael Lewis.

In an excerpt called “The Ballad of Big Mike,” Lewis tells the story of Michael Oher, an impoverished kid from Memphis who through a strange confluence of events ends up in the legal custody of a wealthy white family. At the time of his adoption at 16, Oher had an IQ of 80.  With his adoptive parents’ resources and support from the Christian high school he attended, his I.Q. rose by 20 to 30 points. He went from foraging through the garbage for food to traveling on his father’s private jet. It’s also worth mentioning here Oher is also a behemoth —6’5, nearly 300 lbs. and boasting a basketball player’s physical grace — so by the time he graduated high school, he was on the wish list of every top college football recruiter in the country.

Now, the ballad comes to the big screen. The movie based on the book comes out November 20th, and the trailer seems to be focused on the relationship between Oher (Quinton Aaron) and his adoptive mother Leigh Ann Tuohy (Sandra Bullock), as well as the kid’s massive size. (Frankly, the trailer is worrisome and strikes me as an “Inner City Teacher Movie.”)

What the trailer and the NYT article barely mention is Lewis’ analysis of the “evolution of the game” — specifically the left tackle, whose job it is to protect right-handed quarterbacks’ blind side from rushing defenders (hence the title). As the N.F.L. has opened up for passing offenses, left tackles have grown in importance, and are now the highest paid players after quarterbacks.  Oher, who was drafted in the first round out of Ole Miss, is an almost prototypical lineman: huge, strong and surprisingly agile.

The movie and book trailers are after the jump.