Your Monday Random-Ass Roundup: In Praise of Pootie.

“Do The Right Thing” and “Malcolm X” are on the short list of my very favorite films. I fell asleep 30 minutes into “Diary of a Mad Black Woman” merely to escape the unholy rubbish unfolding before my eyes. And don’t even ask me what I think about “Meet the Browns.”

But when it comes to choosing sides in any silly beef between Spike Lee and Tyler Perry, and deciding who will be the ultimate gatekeeper for on-screen representations of colored folks, I think we’re all better off picking Pootie Tang: 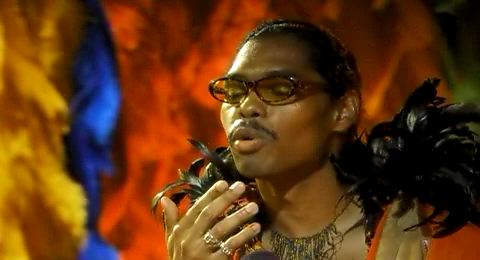 Now for your weekly random-ass interruption of links:

1. Rep. Barney Frank (D-Mass) is close to introducing legislation that would revamp the U.S. financial system, a historic attempt at reining in institutions deemed  “too big to fail.” (Blackink)

2. Speaking of fail, as talk of a public option gives way to a public mandate, the LA Times notes that insurers are absolutely giddy about the impending healthcare overhaul: “… there are likely to be no limits on what insurers can charge, while at the same time the plan is expected to limit competition from any new national government insurance plan that lawmakers create.” (Blackink)

3. Rudy Giuliani’s race-baiting on behalf of Michael R. Bloomberg, the mayor of New York City, rested on the presumption that an electoral victory by William C. Thompson would take the city back to the bad old lawless days of David Dinkins. But Michael Powell of the NYT thinks that the narrative assigned to Dinkins’ mayoralty — crime, homelessness, unemployment — has overshadowed much of what he did right. (G.D.)

4. Also, Giuliani is making half-hearted overtures about challenging the flailing David Paterson. “Friends and foes alike say they wonder whether Giuliani, who obviously considers himself fit to lead the United States of America, could really want to relocate to the state capital and play ringmaster of the Albany circus.” (Blackink)

5. AMERICAblog points us to a “fascinating and devastating” video from Media Matters, proving that Fox News has little understanding of the concept “Fair and Balanced.” Or perhaps they do and don’t give a damn. David Waldman at the Daily Kos breaks down the tape.  (Blackink)

6. Shortly after Obama took over the Oval Office, Jamelle repeatedly pointed out that presidents don’t like to roll back their authority, which meant that Obama was probably going to hold on to the sweeping executive powers that the Bush Administration carved out for itself. Julian Sanchez echoes Jamelle’s point, saying that the virtually unchanged update to the Patriot Act that passed last week proved that the Obama administration is likely to stay on the same path. (G.D.)

7. More than 300 prospective jurors showed up at a west Texas courthouse today in the start of trials for a dozen polygamist sect members charged with abuse of underage girls. “Seating an impartial jury in this community of fewer than 1,900 voters may prove difficult, because most residents know one another and the April 2008 raid on the Yearning For Zion Ranch drew intense media coverage.” (Blackink)

8. Frank Rich comes to the defense of Balloon Dad, likening his desperate lurch for fame as a sign of the times. “Richard Heene is the inevitable product of this reigning culture, where “news,” “reality” television and reality itself are hopelessly scrambled and the warp-speed imperatives of cable-Internet competition allow no time for fact checking.” (Blackink)

9. The BBC uses a retrospective on John Howard Griffin, the white guy who took medicine for vitiligo and went underground as a black man in the south in the 50s, to talk about recent incidents of blackface. Griffin, of course, wrote “Black Like Me.” (Quadmoniker)

10. Four San Jose police officers have been placed on administrative leave while the department reviews an incident in which a 20-year-old college student was repeatedly struck with a baton and was shocked with a Taser gun. There is video, and it is disturbing.  (Blackink)

11. A new bill in Oklahoma that would have required physicians to provide the state with detailed personal information about women who have abortions has been delayed by a state court, providing a glimmer of hope that common sense and decency might prevail there. (Blackink)

12. A popular Chicago nightclub doesn’t like the cut of your jib … if your jib happens to be black? (Blackink)

15. Charity expert Dan Pallotta argues in The Daily Beast that sexism is holding back the non-profit sector, preventing them from adopting aggressive business practices. (Blackink)

16. Daily newspapers are reporting a nearly 11 percent
decline in circulation over the past year, part of an entirely predictable but disturbing trend. (Blackink)

17. Shiloh Pepin, who was born with a rare condition often called “mermaid syndrome,” has died. She was 10. (Blackink)

19. Sigh. Texas Southern University in Houston has stripped Tavis Smiley’s name from its communication school for failing to fulfill his Covenant with a Black School. A sad quote here: “TSU’s well-publicized problems made it impossible to raise money from corporate donors, Smiley said Friday. ‘And obviously, not unlike most Americans, my personal income has been impacted by this recession.'” (Blackink).

20. Lebanese chefs prepared more than two tons of hummus Saturday, breaking a world record held by Israel and hoping to assert their claim to proprietorship over the popular Middle Eastern dip. Donkeylicious calls it “the kind of Middle Eastern conflict I can get behind.” (Blackink)

21. Trying to be “more competitive” has gotten former Miss California Carrie Prejean sued. To save you the trouble, this is a story about her breasts. (Blackink)

22. I don’t even know how to categorize this – where does Sully find this stuff? (Alisa)

23. This article really makes me want to see Avatar. (Belleisa)

24. Cracked puts together a list of the five most unintentionally racist movies about racism. And of course, the god-awful “Crash” is on there. (Blackink)

25. Wonder why the Yankees haven’t won a World Series in so long? Well, it involves God a quadrennial summit between God and Satan… (G.D.)
26. I’ll refrain from providing many details here about the sordid scandal that unfolded at ESPN last weekend (trust, it’s easy to find) but a few sports blogs were appropriately disgusted at the childish and incendiary “coverage” by Deadspin. (Blackink)

27. Sadly, former NBA star Antoine Walker’s lack of on-court discipline was merely a hint at the troubles he had off the court. Yet another cautionary tale for pro athletes. (Blackink)

28. What it’s like to play for the nation’s only all-black college lacrosse team. (G.D.)

29. Now that the NFL’s costly building spree of the past 15  years has more than quadrupled debt held by the teams, club owners are pushing for a new labor deal with the players.  (Blackink)

30. And finally, former Florida State football star and Rhodes Scholar Myron Rolle – once again – is simply better than the rest of us. “The nicest thing about Oxford, Rolle said, is that it makes him feel as if he is in no hurry. He graduated from high school early and finished his education at Florida State in two and a half years, cutting short his football career by a season. He said the pace of Oxford had allowed him to throw himself into his studies without feeling harried.” (Blackink)

Until the next time, I gots to say na nay no.

Enjoy the rest of the week.