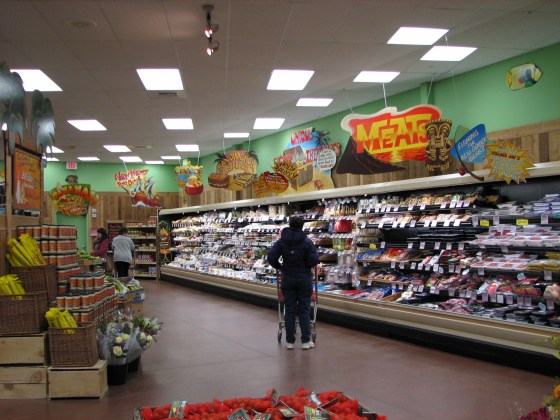 Up until last fall, I lived in Bed-Stuy, and the only supermarket near me was so far away that I would just do my food-shopping on the way back from my gym — which happens to be in a completely different neighborhood.  The bodegas on either end of the block where I lived only sold white bread; fresh fruit and vegetables were completely out of the question. Fast food restaurants abounded. After 10 p.m., you had to stand outside the bodega and tell the store employee what you wanted through bullet-proof glass; they handed you your goods via a rotating carousel. If you were hungry at that hour — and I usually was, since I work evenings — there was no place to get food, except Papa John’s. (Ugh.)

Then my lease ran out and I stumbled into an apartment for slightly less than I was paying — in Park Slope, that notorious bastion of upper middle class liberalism and helicopter parenting. My mind was blown. It’s just two miles away, but the demographic chasms are ginormous. This is the whitest, most affluent place I’ve ever lived, and the nutritional options border on the cartoonish. There are supermarkets two blocks in every direction, a surfeit of top-shelf restaurants, the famous Food Co-Op, and the 24-hour bodega on the corner sells fresh herbs and organic kale. As dope this is for me now, I had to move to a completely different neighborhood in order to have regular access to fat-free milk.

The larger public health implications of these kinds of disparities  are obvious. The lack of access to a decent-sized supermarket is a growing problem here in the city, though it’s worse in other places:  there are just four chain supermarkets in all of Newark, New Jersey’s largest city; Detroit, a city with a population of just under a million, doesn’t have any.

When we talk about obesity and the way it correlates is poverty, we spend most of our time talking about pushing low-income consumers into making healthier choices and probably not enough time discussing how we can get food retailers to sell healthy food them in the first place.

Suffice it to say, I’m a big fan of this idea by Mayor Bloomberg.

Now, in a city known more for hot dogs and egg creams than the apple of its nickname, officials want to establish an even bigger beachhead for healthy food — new supermarkets in areas where fresh produce is scarce and where poverty, obesity and diabetes run high.

Under a proposal the City Planning Commission unanimously approved on Wednesday, the city would offer zoning and tax incentives to spur the development of full-service grocery stores that devote a certain amount of space to fresh produce, meats, dairy and other perishables.

The plan — which has broad support among food policy experts, supermarket executives and City Council members, whose approval is needed — would permit developers to construct larger buildings than existing zoning would ordinarily allow, and give tax abatements and exemptions for approved stores in large swaths of northern Manhattan, central Brooklyn and the South Bronx, as well as downtown Jamaica in Queens.

This is just one of the myriad (market-based!) ways that government can improve food options for the poor. A food program in Detroit is trying to set up a system where buyers using food stamps can spend twice as much on food if they purchase it from one of urban farms sprouting up throughout that depopulated city. And the White House is trying to make it easier for people to use food stamps at farmer’s markets. Even  junk food taxes could help, but we can’t just make unhealthy food purchases more onerous. We also have to make good, healthy food much, much more convenient.