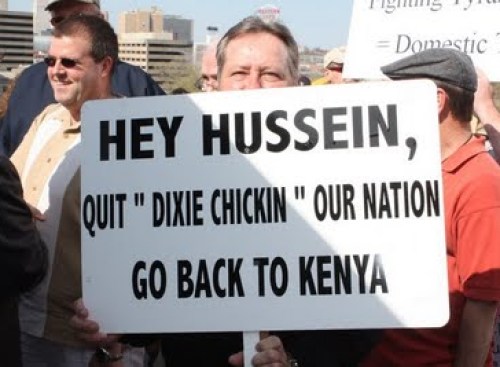 It would be an understatement to argue that the mass media has taken on racial analysis with unprecedented zeal since the election of Barack Obama. Unfortunately, in attempts to present fair and balanced news coverage, cable news programs have typically included panels with representatives from both sides of the Left-Right ideological spectrum.

The problem with this method, of course, is that subsequent analyses usually follow the same tired pattern: “That was racist!” vs. “That is ridiculous! Race was not a factor!” At best, this produces unproductive exchanges. At worst, it woefully simplifies complex social process and interactions, institutionalizing diametrically opposed ideological camps instead of offering nuanced analysis.

“Of course it’s possible to reject Obama’s policies and philosophy without being racist. But there’s a particularly nasty edge to the most vitriolic attacks — a rejection not of Obama’s programs but of his legitimacy as president. This denial of legitimacy is more pernicious than the abuse heaped upon George W. Bush by his critics (including me), and I can’t find any explanation for it other than race.

I’m not talking about the majority of the citizens who went to town hall meetings to criticize Obama’s plans for health-care reform or the majority of the “tea bag” demonstrators who complain that Obama is ushering in an era of big government. Those are, of course, legitimate points of view. Protest is part of our system. It’s as American as apple pie.

Not to be outdone, Frank Rich weighed in on Saturday:

“But there is a national conversation we must have right now — the one about what, in addition to race, is driving this anger and what can be done about it. We are kidding ourselves if we think it’s only about bigotry, or health care, or even Obama. The growing minority that feels disenfranchised by Washington can’t be so easily ghettoized and dismissed.”

Robinson and Rich hit the nail on the head. To argue one way or another that current debates over healthcare or other social policies are solely “about race” is to miss the point entirely.

Race is omnipresent in this country. Racial distinctions inform policy debates, delineate opportunity, and structure social interactions. But that doesn’t mean that all white people, or all white protestors, are uniformly “racist.” Nor can the omnipresence of race sufficiently and adequately capture the nuance of white racial identity. For different people, different social processes precipitate racial prejudice. Some learn from their parents, while others learn from conflict in the workplace. Some develop prejudices from economic competition with minorities, while others experience blind ignorance as a result of extreme social isolation. Among the so-labeled “racists,” some hold disdain for “welfare queens,” while others fear random violence from young black men. Some are overwhelmingly concerned with illegal immigration and “protecting our borders,” while others can’t even stand the thought of sitting next to a minority. Some believe in the racial profiling of Middle Eastern folks at airports, while others blame blacks for their own disadvantage. Some engage in recreational racism, while others use disdain for social policies like affirmative action as proxies for bigotry. Some whites hold a combination of these prejudices, while others hold none. Sometimes these prejudices are grounded in real life experiences, but sometimes they aren’t. At the very least, white racial identity and prejudice is complicated and takes innumerable, varied forms.

To discuss and analyze race is not to revert to an either/or, racist/not racist false dichotomy. Race matters as an everyday reality of inequality, yes, but it’s not as simple as the White Racist Meme suggests. Race matters because it’s always mattered. But racism matters in increasingly complex ways.