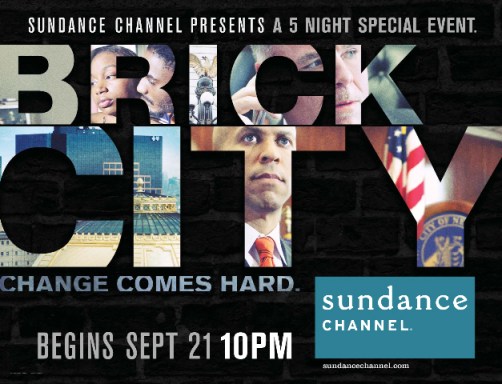 (by Kiana, x-posted from ProperTalks)

Sundance’s Brick City is the only reality TV show worth watching this week. The street soldiers, sheroes and heroes of Newark New Jersey along with Mayor Cory Booker are all attempting to renew Newark’s urban landscape but they are up against the city’s infamous reputation, earned mostly with blood and corruption.

The spirit of Newark is rough but Brick City wins because it doesn’t romanticize or demonize Newark and its people. Comparisons to The Wire are inevitable but I think Brick City will appeal to the people who thought The Wire was too raw. The irony of that is laughable since The Wire was a drama and Brick City isn’t scripted, but the miniseries is a tamed version of David Simon’s masterpiece.

There is violence (a 10 year old is shot and killed in his neighborhood in part one), there is incredible pain, which leads to frustration, but there is also a sense of optimism that I rarely saw in The Wire.

The two clear standouts of Brick City are Mayor Booker and ex-Blood, Jayda, who is in love with an ex-Crip and pregnant with her second child.

Mayor Booker hammers over and over again his message that Newark leads the nation in crime reduction. We see him navigating two worlds, the ghettos and city hall, but he seems out of place in both settings even as he’s embraced almost everywhere he goes.

He usually dresses down, in gym clothes, when he rides around the more dilapidated sections of Newark, talking to teenagers and offering corner boys jobs. These street images of Booker are juxtaposed with scenes of him draped in suit and tie, delivering fiery speeches to a room full of police officers or local politicians and potential donors.

I think there should be more Mayor Bookers in the world but there is a part of me that is skeptical of the motives of any politician, though I wouldn’t go as far as Amiri Baraka and refer to Booker as a “white racist Negro.” I don’t want to negate the needed work Booker is doing in Newark but you’d be a fool to ignore how Brick City will set the mayor up for higher political ground whenever he’s ready. The show is simmering with potential campaign slogans. It will be interesting to see Newark’s future when Mayor Booker leaves someday. Only time will tell if the “bricks” he lays now will withstand the realities of the city.

Mayor Booker is the anchor of Brick City but Jayda and some of the other ex-gang members are the heart and substance of the show. I could watch a spinoff show featuring Jayda any day.

I’m touched by her struggle because I realize that my life could have easily been hers if my parents were bringing home a smaller check, if my parents didn’t have the time or will to parent, or if I decided to emulate some of the behavior of the girls I ate lunch with in high school.

I’m not nearly as tough as Jayda but I see her in so many of the young girls I work with today. They have tongues that can cut – sometimes they might just cut you – but they also have endless potential when they are focused and surrounded by wiser heads. The shows creators attempt to portray Jayda and her boyfriend Creep’s story as a ghetto Romeo and Juliet, but Jayda is so damn common it’s a wonder no one has thought to highlight a story like hers before.

These stories can be replicated in cities throughout America; if Sundance was smart they’d turn this into something bigger than Newark.