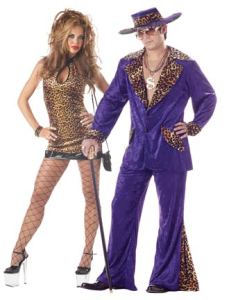 It’s hard out here for a pimp. No, really. James O’Keefe and Hannah Giles (not pictured above) risked their lives, limbs and a camcorder to infiltrate the den of “thug criminality” that is the largest organization of poor and working families in America.

This is a time for us to appreciate their deep commitment to maligning ACORN, which clearly is an issue of utmost importance in these most troubled and divisive of times. I am sure their hearts and motives are pure.

Now if we can, let us move forward and consider some of the news of the weekend:

1. As always, if you want to learn something new or interesting or possibly infuriating about health care reform, reading Ezra Klein is essential. (Blackink)

2. Are pregnancy, bunions, acne, or receiving therapy or counseling pre-existing conditions that might allow health insurers a reason to deny people coverage? Of course. Best health care system in the world, eh? (Blackink)

3. Officially, according to a U.S. Census report, the Bush years were full of fail. h/t John Cole. (Blackink)

5. Massachusetts might appoint an interim replacement for the U.S. Senate seat left vacant by the late Ted Kennedy by the end of the week. (Blackink)

6. In an e-mail sent to friends and supporters last week, Van Jones made his first public comments since resigning from the White House. Said Jones: “Of course, some supporters actually think I will be more effective on the ‘outside.’ Maybe so. But those ideas always remind me of that old canard about Winston Churchill. After he lost a hard-fought election, a friend told him: ‘Winston, this really is just a blessing in disguise.’ Churchill quipped: ‘Damned good disguise.’ I can certainly relate to that sentiment right now. :)” (Blackink)

8. Something we probably won’t see in any campaign brochures from Texas Gov. Rick Perry next year: Texas remains first in the nation in rates of uninsured residents and uninsured children. Upholding family values and rebuffing creeping socialism … I love my home state. (Blackink)

9. Also related: Perry is not a very smart or honest man. (Blackink)

10. House Minority Leader John Boehner (R-OH) backed off prior claims that President Obama is a socialist because, uh … he’s not one. (Blackink)

11. Among those at the Values Voter Summit this weekend, former Arkansas governor Mike Huckabee was the clear choice for 2012 Republican presidential nominee. The 600 voters said abortion was the most important issue in determining their choice. What else is there to say about that? (Blackink)

12. Also at the Values Voter Summit, the chief of staff for Republican Sen. Tom Coburn of Oklahoma made the case that: 1. we should trust the sexual instincts of prepubescent boys; 2. bigotry against homosexuals is fine by him; and 3. “all pornography is homosexual pornography.” Video here. Sigh … Michael Schwartz and his ilk are almost completely beyond ridicule. (Blackink)

15. Feminist Finance speculates on where she’d be if she hadn’t rejected all the “dudely money advice” she’s received over the years. (Shani-o)

16. BitchPh.D puts out a call for volunteers for the 40 days for CHOICE campaign. (Blackink)

17. For John and Elizabeth Edwards’ sake, I hope his former aide is lying about this: “Mr. Edwards once calmed an anxious Ms. Hunter by promising her that after his wife died, he would marry her in a rooftop ceremony in New York with an appearance by the Dave Matthews Band.” Please let that be a lie. (Blackink)

18. Let us mourn the death of American civility with Jude at First Draft. (Blackink)

20. According to Marcus Buckingham at the Huff Post, women have grown increasingly unhappy as they made professional and social progress over the past 40 years. There’s a lot to digest in the provocative piece, and I get the feeling something is missing from this analysis. I need someone smarter than me to fill in the gaps. (Blackink)

21. After six years, Leslie Bennetts says The New York Times is finally attempting to set the record straight about the “Opt-Out Revolution” – well-off women who quit their careers to become full-time mothers. (Blackink)

22. Crooked Timber highlights a recent op-ed in The Chronicle of Higher Education that points out the problem of poor, black and Hispanic students choosing to go to less-demanding college institutions and an overreliance on standardized tests. (Blackink)

23. Colorism isn’t just the purview of black folk — it exists in the South Asian community as well. Sepia Mutiny notes a campaign that’s attempting to address the fear of darker skin. (Shani-o)

24. After charges were dropped last week against five men accused of raping a Hofstra University freshman, Amanda Hess parses some of the many problems of living in a rape culture. That includes false rape accusations. (Blackink)

25. In case there was ever any doubt, Andrew Sullivan has major pull. (Blackink)

26. While I was watching the Giants thump the Cowboys and the season premiere of “Curb Your Enthusiasm,” apparently Neil Patrick Harris and the Emmy Awards were putting on quite the show. (Blackink)

27. I’m finding myself agreeing with Alyssa again: you should definitely get down to your nearest newstand or bookstore, pick up a copy of the latest New Yorker and read Ta-Nehisi’s piece about MF Doom and hip-hop. And, like her, I might quibble a bit with a few parts of the feature. Then again, we’re both from the South. (Blackink)

28. Harry Allen asks if Kanye is doomed to become “the next O.J.”? At the least, Kanye’s “victimization” of Taylor Swift has drawn out some of the bigots among us. (Blackink)

29. Nearly four-fifths of NFL players are bankrupt or struggling financially within two years of retirement. The Business Insider looks at some of the reasons why. (Blackink)

30. And because I’m from Houston and hate the Dallas Cowboys, I really enjoyed this: Feel free to drop some links that would be of interest or chat among yourselves. Let’s hope we’re all in for a great week.