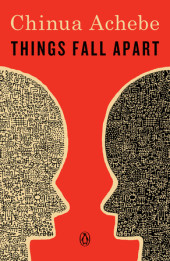 It has been speculated that Uncle Tom’s Cabin aggravated the cultural conversation about slavery and planted the seeds for the Civil War. Whatever analysis is taken from the novel, Harriet Beecher Stowe’s serialized stories became relevant during a very particular time and place.

So, what set the cultural tone for an unknown West African man to publish the novel that would come to be seen as the seminal work from the African continent? Why was it important that this story be written in English?

Brief context: already dealing with post-WWII economic ruin, and wanting to avoid the expensive wars being fought by other European powers, the British began decolonization. During the mid-20th century, large swaths of their African colonies became (using the term very loosely) independent nations.  Things Fall Apart, by Chinua Achebe was published two years before Nigeria was granted its independence.

Historically, it does not appear that Achebe’s novel could have been published at a more accepting time. Yet the novel’s very existence is an interesting contradiction—a thoroughly African story written in the preferred style and language of the author’s adopted culture.

In an essay titled “The African Writer and the English Language,” Achebe deals with, among other things, English as a global language used to tell many different stories.  At the end of the essay Achebe quotes James Baldwin whose qualms with the English language is that it reflects none of his experience. To this Achebe responds:

“I recognize, of course, that Baldwin’s problem is not exactly mine, but I feel that the English language will be able to carry the weight of my African experience. But it will have to be a new English, still in full communion with its ancestral home but altered to suit its new African surroundings.”

And what of, as stated above, “a thoroughly African story?” And how does Achebe use the English language to suit his African surroundings? What at the core are the universal themes of Okonkwo’s story?