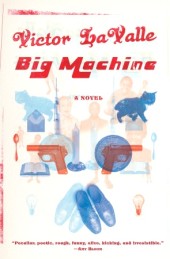 Ricky Rice is a former dope fiend and a surviving member of a suicide cult. And when he gets a mysterious letter to uphold a promise he made long ago, Ricky becomes a member of a secret society of paranormal investigators called the Unlikely Scholars. When the society is threatened, Ricky is teamed up with Adele, a Scholar with a past maybe even sketchier than as his own.

I sat with the author, Victor LaValle, who also wrote Slapboxing with Jesus and The Ecstatic, to talk with him about his new novel Big Machine. It’s well-written, fiilled with mystery and adventure. Also, it’s just damn funny. I tried my best not to reveal too much about the plot. We talked about the story, the writing and the process. An excerpt:

BelleIsa: You also said that “I view writing fiction as a lifelong pursuit toward self-awareness.” What if anything were you attempting to work through?
Victor LaValle: In the novel, I was working through choice. The after effects of making choices. There was a woman I had been dating. I got her pregnant and she had an abortion. We went through it together in the sense that I was with her while she went through it. Then we broke up, really badly. And I thought the abortion was only supposed to matter to her. Like it’s something that only the woman continues to think about after the fact. It wasn’t supposed to leave a lasting feeling of responsibility, guilt, and questioning in me. That’s what I thought, but I was wrong. So I wanted to write about that. To understand it.

But I also wanted it to be a kick ass-story about a secret society with black people acting as crazy as people in a Bruce Willis movie.

BI:  In an older interview on narrative voice you  said that “the person you are is what creates the story you’re writing.” What part of you helped create this story?

VL: I started going back to church about four years ago. I go to the Wednesday service because its rarely more than five plus people and the priest. And the five are really idiosyncratic people. They’d heckle the priest during his sermon. They’d say, ‘Your interpretation is this, but when I heard that verse I always thought this’ and we’d get into a little discussion about it. It taught me that you could be a person of faith and make use of doubt. That doubt is actually a way to defend yourself from other people’s bad ideas. Rather than a way to sort of dismiss God. That shaped the book.

BI: You also said that “I view writing fiction as a lifelong pursuit toward self-awareness.” What if anything were you attempting to work through?
VL: In the novel, I was working through choice. The after effects of making choices. There was a woman I had been dating. I got her pregnant and she had an abortion. We went through it together in the sense that I was with her while she went through it. Then we broke up, really badly. And I thought the abortion was only supposed to matter to her. Like it’s something that only the woman continues to think about, after the fact. It wasn’t supposed to leave a lasting feeling of responsibility, guilt, and questioning in me. I was wrong. So I wanted to write about that. To understand it.

But I also wanted the novel to be a kick ass story about a secret society. With black people acting as crazy as people in a Bruce Willis movie.

BI: You don’t think there are enough representations of “black people acting crazy?”
VL: I think there’s a lot of that in the real world, and in work that’s considered commercial. In literary black fiction I feel like we’re supposed to be more exemplary, socially concious—but that shit is rarely very much fun.

BI: There’s this great line where Ricky captures the economic state of the secret society he is working for “It was like trying to fund the CIA with a lemonade stand.” Why so much focus on the society being underfunded?
VL: Most secret society films you see, if they have to go fight a villain across the ocean …they rent a plane, there’s a jag waiting. I thought, how much fun would it be if you could talk about trying to be heroic but on a budget? I thought about all the times in my life when I was trying to do something heroic or adventurous and then I get somewhere and I discovered, ‘I gotta ride standby.’

Also, you can often go and do things for and with people of color and minority organizations. They’re hand to mouth, always busted, broke as shit, and barely holding things together. Sometimes it’s pathetic, sometimes it’s even more amazing that they pull shit off.

BI: Heroes get uniforms as do the ones in your novel. Can you talk about the characters, particularly Ricky and Adele’s need to keep suiting up throughout the journey?
VL: There’s this idea that the last time black people were on top was the Harlem Renaissance or the Jazz Age. Even the most down and out people still put on their hats. It’s a legend. Every group has one. Uniforms, of some kind, seem like a universal desire amongst human beings. They’re tools for identifying your tribe. But they’re also a part of the myth-making that’s necessary for people to gain power, for a person to create power for themselves.

BI: Let’s talk about the Washerwoman (the leaders of the cult). Were they inspired by something you read? A news report?
VL: I actually just made them up. I wanted to have both genders be susceptible to the lure of messianic ideas, to thrive and be powerful under those ideas.

BI: I’m glad you mention gender. In The Ecstatic, I remember the main character getting into a huge fight with his sister. In this novel you’ve created a cast of foul-mouthed, fiercely opinionated and largely defiant women. I’m not complaining. Adele in particular is pretty overbearing.
VL: I grew up with women who fought physically. I’m not terribly interested in women who don’t fight back and who don’t have a little fire, so I can’t really write them.

I’ve had a lot of reactions to Adele in particular and a lot of them negative—especially from men. The Washerwoman maybe a little less so because they’re seen in flashbacks. But I had a couple of dudes say by the end you don’t necessary believe that they’re [Ricky and Adele] in love.

If you don’t believe it because you can’t imagine someone falling in love with Adele then that’s your fault. I think Adele is immensely lovable, personally.

BI: I gotta say I love the fact that she wasn’t thin and had super long hair.
VL: She’s pear-shaped because I like pear shaped women, among others.

BI: You created a lot of physical trauma on Ricky’s body. Was that the nature of a life lived like his?
VL: I wanted Ricky to be the one who goes through trauma, instead of Adele, because of a conversation I had with a friend of mine after seeing this German movie called The Lives of Others. It’s about a man who’s part of the East German secret police and a playwright who the policeman is secretly monitoring.

The playwright also has a girlfriend who is put through all kinds of punishments throughout the movie. She’s beaten, she’s forced to have sex with a terrible dude, and then things get really bad for her! And by the end of the movie the two men have become closer, they’ve come to understand each other. All after the woman between them has gone through a hell of a lot of punishment.

And my friend, a woman, pointed out that this was a very common thing to see. The men become wiser, but it’s at the woman’s expense. She has to be brutalized in order for them to learn. And as soon as my friend said it, it seemed really true. Not just about this movie, but about lots of art. So I made a decision that in this book Ricky would be the one who got knocked around, and Adele would be spared. If Ricky was going to gain any wisdom he was going to earn it himself

Plus, I just love writing violence.

BI: We follow Ricky in and out of the past picking up pieces of his life along the way. How difficult was it to shape the release of information?
VL: The final shape of the book probably didn’t appear until about the 10th or 15th draft of the book. We have the present day story and a couple of different long flashbacks that explain important events in Ricky’s life. I spent a long time trying to figure out the best way to switch between the present day and those flashbacks.

In the earlier versions the back and forth was crazy confusing. My readers couldn’t keep it all straight. So I had to experiment, again and again, with the best way to tell all these stories but still keep the reader from feeling overwhelmed. Eventually I got there, but it took a hell of a long time.

BI: Did you read anyone in particular for help?
VL: Shirley Jackson’s Haunting of Hill House. I read maybe the best story F. Scott Fitzgerald ever wrote. It’s called May Day.

BI: How did that help you?
VL: It’s a novella maybe 50 pages, at this point it would be recognizable in any Quentin Tarantino movie. He [Fitzgerald] jumps around a lot and over time you start to see the narrative threads bind together.

Also Gayle Jones’ Correigedora, I read it once a year and it scrambles my brain. It’s pretty nuts.

BI: Do you outline at all?
VL: I don’t.  Before the religious stuff and the abortion stuff was in this book, it was a straight detective novel about a secret society and this one off-shoot member who starts a holy war.

When I start a book, in the beginning, I don’t know what the book should really be about. As the author I can’t dig into what action needs to be confronted on a personal level, or an intellectual level. So if I come up with an outline too soon and stick to that, I’m afraid it doesn’t leave room for where the book needs to go.

BI: So I need a quirky close-out question, like the type of stuff Deborah Solomon asks in the NYT. This is all I could come up with: Who would play Ricky Rice and Adele in a movie?
VL: While I’m no casting director I would elect Mos Def to play Ricky. And for Adele, I think Regina King would be amazing. She’s not the same body type, but I think she would bring the fire.

BI: And this one….what are you working on next?
VL: I’ve got another novel that’s almost ready for my editor to see. Something shorter, a quick read that’s a lot of wild fun. It’s called The Devil in Silver. It’s kind of a haunted house story, but it won’t read like anyone else’s haunted house story if I do it right.