If this post from Thomas Lifton passes for true American Thought, then we’re all doomed: “I think this photo constitutes another major Obama blunder. As some AT commentators point out, this picture becomes a metaphor for ObamaCare.” A former colleague once told me, “Blackink, don’t argue with logic. Because logic will argue with you.” Truer words … 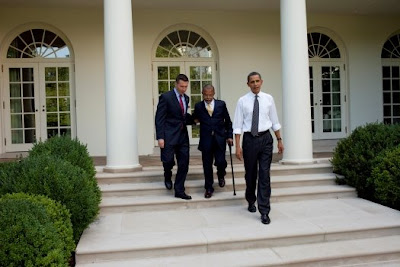 On a slightly more positive – and logical – note, here’s your PostBourgie-approved reading material from the weekend:

Have you all seen President Obama’s official Kenyan birth certificate? The document that finally proves – once and for all – that Obama is the Antichrist sent back to Earth to turn the U.S. into a third-world mudhole and bleed hard-working real Amurikins of their tax dollars in the form of reparations? No. Of course not. Because one doesn’t exist. (Blackink)

According to a bunch of economic indicators, the recession may be slowing down. Good news, but any potential recovery probably won’t be quick enough for the 1.5 million people who will probably run out of unemployment benefits in the next few months. (G.D.)

This is your new Republican party: Writes Like She Talks posts 13 candidates in the GOP “Young Guns” program — an initiative to challenge sitting House Dems (unsurprisingly, very few of them are actually “young”). Guess what? Out of the 13 GOP challengers, one is a woman, and two are Asian men. Meanwhile, five of the races are challenging Democratic women. (Shani-o)

Our very own Jamelle, Matt Y, Steve B and Ezra offer thoughtful rebuttals – some might call them smackdowns – of Ross Douthat’s column today praising Texas as a “model” economy. As a sort of aside, I had quite a chuckle when Jamelle referred to Ross “an affirmative action hire.” Good one. (blackink)

Adam at TAPPED notes the state of leadership in Black America. It ain’t pretty. (Shani-o)

Lou Dobbs has become a “publicity nightmare” for CNN. (G.D.)

In case you missed it, here’s the text of the e-mail Boston police officer Justin Barrett sent to Boston Globe columnist Yvonne Abraham. What’s funny is that he criticizes Abraham for her “ridiculous” and “substandard” writing. What’s scary is that he thinks suspects don’t have rights. Here’s hoping no one ever again sees this guy trailing them in their rearview mirror. (Blackink)

In the early 1800s, firefighting was a private, for-profit industry in most urbanized U.S. cities. And it might surprise you – or not – to know that the industry was “corrupt, bloated and expensive.” Sound familiar? (Blackink)

Hortense at Jez takes to task another one of the “stupidly named sociological gangs” women frequently find themselves placed in by the world. Like Cougars, MILFS, and PUMAs, the latest term is “TWITS” and it stands for “Teenage Women in their Thirties.” Ugh. (Shani-o)

Michael Pollan, self-appointed champion of food and foodies everywhere, pens a piece in the Times Magazine on television’s role in the death of real home cooking. mute sees his latest pronouncement as snobby and ineffective; Amanda Marcotte calls him antifeminist. (I wonder what our resident kitchen maestros universeexpanding and Jamelle think about his conclusions) (G.D.)

There’s absolutely no reason that a cop should tase a 72-year-old woman on a dare. (Blackink)

A luxury condo in downtown Fort Myers, Fla., has 32 stories and only one tenant. (Blackink)

College Humor offers a solution to MySpace’s problem: dead accounts. (I think I might need that MySpace Hospice option.) (Shani-o)

Baatin, one-third of the original Slum Village lineup, was found dead in his home. He was 35. (Jay Dilla, the hugely influential producer who was the group’s most famous member, died in 2003 from complications due to lupus.) (G.D.)

New York, Boston and Chicago round out the top 3 on Forbes‘ list of best cities for singles. But Milwaukee at No. 9 and Miami at No. 29? Really? (Blackink)

The best take on Michael Vick, The Commish and the sanctity of The Shield that I’ve read so far: “Since he was first covered by the media, prosecuted by the government, and admonished by the NFL with such brio, Vick has served as a vessel for the country’s anger toward black men. There was little effort made to understand what he did and why he did it, as though stopping to do so would necessarily excuse it. Beyond this lack of general curiosity and empathy, there was an ugly racial element. To be blunt, Vick’s crime was a black one.” (Blackink)

Joe Jackson explains to us the difference between spanking and beating. (Shani-o)

And at this point, Mariah has pretty much proved her point about Eminem being obsessed with her. Who keeps the voicemails of someone they slept with once, several years ago? More on this later in the week. (Blackink)

Oh. And could someone tell Stephon Marbury to turn off the camera? Please?