Hey, has anyone else seen that picture of President Obama ogling that 17-year-old girl’s ass at the G8 summit in Italy?: 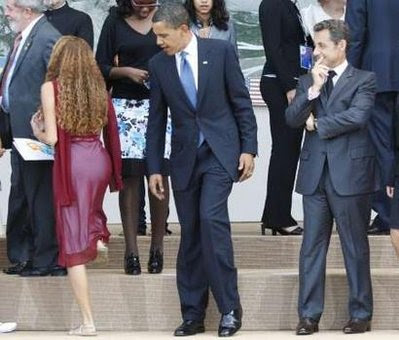 Of course you didn’t. Because there’s no such picture and he wasn’t doing that. Silly rabbits.

And without any further ado, your reading material from the weekend:

1. On Friday, the Washington Post reportedthat Leon Panetta, the head of the CIA, killed a secret intelligence program started in 2001 that had been hidden from Congress and that he himself only learned about in late June. This, understandably, kicked up a major shitstorm, with Senate Democrats saying they want to investigate the program (and indications from Eric Holder that he wants to go after the Bush administration on torturedespite Obama saying that he doesn’t want to “look back”). As of now, no one even knows what exactly the program entails, but yesterday, the New York Times reported that the program was kept secret on Dick Cheney’s orders.

Seriously, after wiretapping Americans without warrants, authorizing the torture of detainees, and sending others to secret prisons in other countries to be tortured, what other nefarious shit could the Bush administration possibly have thought up? The Washington Times quotes an anonymous source who hinted that the program involved assassinations overseas — which it bears mentioning, is against the law — which is sort of what Seymour Hersh reported earlier this year.

2. The White House has been getting Sonia Sotomayor ready for the confirmation hearings, which start today. What to expect: a whole lot of bluster and self-aggrandizement from senators, a whole lot of “I cannot answer that question lest this issue come before me on the bench” from Sotomayor, a lot of feeble attempts by Republicans to make her look crazy on abortion and discrimination cases, and an easy confirmation.

3. Speaking of SCOTUS, Emily Bazelon sits down with Justice Ginsburg, who has been a vocal advocate for more women on the court. “I always thought that there was nothing an antifeminist would want more than to have women only in women’s organizations, in their own little corner empathizing with each other and not touching a man’s world. If you’re going to change things, you have to be with the people who hold the levers.” Like Sotomayor, she makes no bones about the fact that she benefited from affirmative action. And like Sotomayor, she’s a sparkling example of how it’s supposed to work: Harvard Law (one of five women in a class of several hundred), while raising kids and caring (and taking notes) for her husband who was stricken with cancer. She made law review before transferring to Columbia and graduating first in her class. Please believe it: she’s a beast.

4. Also, a new poll from C-SPAN shows that 54 percent of Americans can’t name a single Supreme Court justice but two-thirds know Obama has picked a Hispanic nominee for the current vacancy on the panel. Behold our idiocracy.

5. a. The NYT takes a look at the events that led up to Sarah Palin’s resignation. After the campaign, Republicans from across the country tried to help her get her affairs in order for her to remain a national figure; as is her wont, she disregarded their advice. She got bogged down in petty fights with Levi Johnston and David Letterman. Her schedule got lighter and lighter, and she took a trip to Indiana for an antiabortion event while the state’s budget was up in the air. Now she’s saying she wants to campaign for conservatives across the country — even conservative Democrats — and fueling speculation that she wants to start her own party.

b. Want to hear more about Sarah? I know you do. Check out this smart post from Anonymous Liberal about the Village’s role in the ascendancy of Palin, likening it to the Hans Christian Andersen classic, “The Emperor Has No Clothes.”

c. Dahlia Lithwick and Frank Rich also offer their own takes on the Quitta from Wasilla.

d. Thanks but no thanks. GOP politicians facing tough elections in 2010 would prefer she stay far away, roughly somewhere in the vicinty of the Bridge to Nowhere.

e. According to a Mudflats reader, Sarah Palin became the member a very exclusive group of state leaders when she announced her resignation the other week. She joined Jim McGreevy and Eliot Spitzer as only three of about 1,200 governors in the U.S. since 1900 to quit in their first term for no apparent reason. That’s quite an accomplishment.

6. As the economy worsens, thousands and thousands of families are joining the ranks of the homeless. Also interesting but disheartening: 20 percent of homeless people live in Los Angeles, New York and Detroit.

8. Despite being in the middle of a shitstorm for condoning racist comments on her Facebook page – and defriending the folks who called her out on it – Audra Shay was elected chair of the Young Republicans. Of course she was. Because, as Michael Steele might say, this is all strategic.

9. With California crumbling under the weight of its deteriorating economy, The Economist asks if Texas is ready to lead the U.S. in the 21st Century? The answers are unclear. But in many ways, Texas represents both the best and worst of our country. And quiet as kept, Texas seems well on its way to becoming a blue state.

That said, we should all fear for the schoolchildren being held captive there by an increasingly partisan educational system. The state’s Board of Education has put together a six-member committee to help develop new curriculum standards for social studies classes and textbooks. Among the members are a couple of conservatives who believe that Cesar Chavez and Thurgood Marshall receive too much credit under the current curriculum. Also, Gov. Rick Perry is considering a rock-ribbed, right-wing conservative to lead the state’s Board of Education. Which wouldn’t be a problem if not for the fact that she argued the country’s founding fathers created “an emphatically Christian government” and that government should be guided by a “biblical litmus test” in her book, One Nation Under God. She also calls public education a “subtly deceptive tool of perversion” and home-schooled her own children.

10. Lou Dobbs does not want you to hear this: “If you want to find a safe city, first determine the size of the immigrant population,” says Jack Levin, a criminologist at Northeastern University in Massachusetts. “If the immigrant community represents a large proportion of the population, you’re likely in one of the country’s safer cities. San Diego, Laredo, El Paso—these cities are teeming with immigrants, and they’re some of the safest places in the country.”

11. SEK at The Edge of the American West pens a beautiful takedownof right-winger Andrew McCarthy, who spent an awful lot of time during the fall complaining that it was impossible to learn anything about Obama’s allegedly radical days at Columbia. Well, the New York Times managed to get the goods. So says SEK: “If you believed that a trip into the city and an afternoon in an archive would spare America four years of tyranny, would you do it? Would you fly into the city, rent a room, borrow a library card, request a day-pass under false pretenses, and spend an afternoon in an archive if you believed that doing so might save the world from nuclear destruction? Or would you whine because no one will silver-platter you a smoking gun?” Please, read it all.

12. No, MLK was not a Republican. And don’t let anyone or anything tell you different.

14. James Kirchick at The Advocate wonders how “half-literate typist” Perez Hilton has “become one of the most prominent gay people in the country?” It’s a fair question.

16. The rise and fall (and rise) of Stephen A. Quite frankly, I disagree with the author’s contention that Smith might be our next Al Sharpton. No thanks. One is plenty.

17. Eating watermelon and fried chicken and drinking Kool-Aid? It’s the Black Olympics, with your host, Dallas Cowboys tight end and all-around buffoon Martellus Bennett. You see, stereotypes are funny. Remind to tell you all this joke about picking cotton later.

18. Joey at Straight Bangin’ reviews the first half of the year in hip-hop. He liked the new joints from Mos, Puba and, miracle of all miracles, U-God. Can’t say the same about the latest from Hov, Eminem and Maino.

Some of you folks are going to have to hang out somewhere else this summer. I’m worried you’re changing the complexion of this blog.

Also, we have only one rule. Tell’em Kobe: