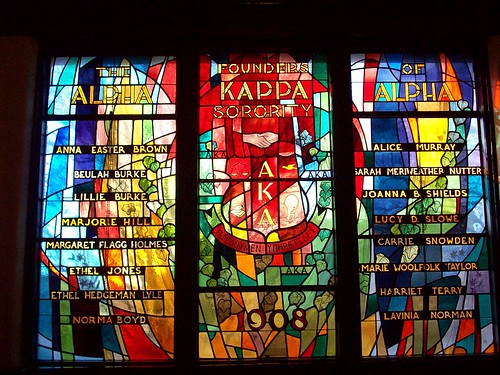 The AKA Windows at Howard's Rankin Chapel.

“I was born secular and inconsolable.” –– Jenny Lewis

My parents fell down on the job.  Both were marched into church relentlessly as children, Sunday after Sunday; mother Catholic-christened Methodist-practicing in Kingston, JA, father Baptist in “real” Virginia.

My mother did teach me to pray.  Not because she really believed the words, but because she had been taught a prayer when she was a child and she wanted to pass it on to me, as she had to my sister.  She didn’t make me pray every night.  Sometimes we did it, sometimes we didn’t.  Mostly, we didn’t.

Gentle Jesus, meek and mild
Look upon a little child
And if I die before I wake
I pray the Lord my soul will take

(Which, looking back, is a really effed up thing to make a kid say every night, right?  Why should I have to worry about dying before I awake?)  Not that I really knew what the words meant, because we didn’t talk about God and we didn’t often go to church.

We had several bibles on the many bookshelves in our house.  But one book intrigued me: “The Lost Books of the Bible.”  There was one story in which Joseph thought Mary had been getting it on with some other dude; he didn’t accept her immaculate conception.  I asked my dad about it, and he just said that there was more to the bible than what we see in the KJV.

They are both prudish and liberal.

When my sister returned to Jamaica and went through a Rastafarian phase, my mother’s issue was more with the kind of people my sister was associating with than with the religion itself.

When we did attend church –– probably not more than six times a year, and half of those times it was just my mother and I –– it wasn’t for the Word.  We went so my father could talk to important people in the local black community, or because someone had invited us to their church, or because my mother had an urge for Sunday morning socialization.  She looked at church and religion as a way to connect with others, and to keep loneliness at bay.  My dad used it for power-brokering.  We were transient church-goers.

I would often fall asleep on my father’s shoulder.

When I got older, I stayed awake to observe the rituals: tears rolling down upturned faces, hands in the air, shaking, clapping, singing, the preacher in the pulpit with sweat pouring down his face as he exhorted us to praise.  It all seemed so … strange.  My father would lean back when the preacher got into full stride, and murmur in my ear with a small grin on his face: “He’s pullin’ ’em.  Pullin’ ’em.”  I didn’t know what he meant at first.  But as I attended more often, and I recognized the signs that the pastor was about to break into the loud, long cadences which indicated the sermon was (thankfully) almost over, I felt, more than saw, the congregation tense as they prepared for temporary rapture.  It was a weekly play, and everyone had a role.  The choir and band couldn’t get too into it, they had to be ready to start singing as soon as the preacher finished; the crowd, mostly women, were ready to spring from their seats; a few older men joined them with low intonations of “thank you, Jesus”; the kids who weren’t in Sunday School tried to mimic their parents or gave up and continued doodling on the program.

It made me feel detached, and sad.  It was too much emotion that I didn’t feel or understand.  What was it that made these people act so undignified and ridiculous?  During the benediction, I would try to feel something.

I’d silently pray over the pastor:  If you’re there, God.  Thank you for everything.  If you’re there.  I hope you are.  Please.  I’d squeeze my eyes shut, and try to feel Him.  Either the benediction was too long or I gave up too easily, because I’d always open my eyes before it ended.  I would look around at the old ladies and weary mothers still shaking and whispering to themselves, at the young couples holding hands tightly, and the men with stone faces and the children whose eyes were closed from sheer exhaustion.  I’d look over at my dad, and often as not he’d be looking right back at me.  My mother’s eyes would be closed, her face betraying nothing of her thoughts.

But the one thing that shocked me was the churchedness of the population.  Sure, there was a pretty large Muslim population.  There were even Jews (and not the crazy black Israeli kind).  There were atheists and agnostics.  But the majority of the students were from some black church or other.  I was taken aback by how “religious” they were about their faith.  They could stay out all night, get completely wasted or high, do God knows what with God knows whom, and show up like clockwork at the university chapel service (which was too large to be held in the Chapel and had to be held in the school auditorium) for some praisin’ on Sunday morning.  And it wasn’t just the church part that weirded me out… it was the talking about God.  All day, every day.  It was often assumed if you went to HU, you were a black Christian and could therefore do little else but agree with the trite phrases trotted out in times of stress (especially during finals), like “God will make a way out of NO way.”

I attended chapel service at school a handful of times.  The one time I felt something was a Sunday that I went with a close friend with whom I’d been having trust issues.   We went up to the front at the altar call and held hands tightly, and bowed our heads.  As the words of the benediction flowed over us, I started to cry.  We both did.  Soon, we we were clinging to each other and sobbing as the lady next to us passed tissues and clucked gently.  But I wasn’t crying over the beauty of God’s love, or whatever it was that people cry about at the altar.  I was crying over our friendship and the problems we were having.  (By the way, it’s three years later, and we don’t speak.)

I sometimes wonder how people have time for church and religion in their lives.  Obviously, we make time for the things that are important to us, and for obligations.  Looking back, I think about all the Sundays when my mother would make ackee and saltfish, my father would play some calypso on the stereo and we’d eat breakfast, then maybe do some gardening in the backyard, or go to the hardware store, and my mother would make and take weekly phone calls to friends and family on the East Coast or in the UK or Jamaica, and my dad would call his family (who were also three hours ahead of us and had just returned from church) and I would read a book or do some neglected homework… my Sundays have always been so full of things to do that were pleasurable and relaxing and reflective and didn’t have anything to do with God.

A few years ago, I started attending a local church with some former classmates who lived near to me.  It was a natural progression.  We partied together, we barbecued together, we went to the movies together…why not go to the 11 a.m. service as a group?

I liked the pastor — he was a former politician, and, oddly enough, a republican who was in favor of gay rights.  I liked the choir.  The vibe was nice.  But once again, as always, something was missing: a feeling.  I didn’t feel anything when I was there, and it seemed so ridiculous to sit, and nod, and stand, and move my mouth to approximate hymns I didn’t know the words to.

I eventually stopped going to that church because I was tired of it taking up most of my Sunday.  That, I later realized, was probably the point I’d been missing.