Home » Browse PostBourgie » The Odd Habits and Foibles of Sexy Black Women on the Internet.

The Odd Habits and Foibles of Sexy Black Women on the Internet. 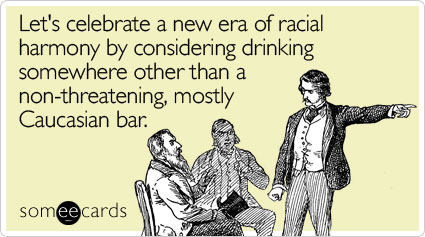 Joel Johnson at Gizmodo decides to “stalk” a black girl on Twitter:

I realized most of my Twitter friends are like me: white dorks. So I picked out my new friend and started to pay attention.

She’s a Christian, but isn’t afraid of sex. She seems to have some problems trusting men, but she’s not afraid of them, either. She’s very proud of her fiscal responsibility. She looks lovely in her faux modeling shots, although I am surprised how much her style aligns with what I consider mall fashion when she’s a grown woman in her twenties. Her home is Detroit and she’s finding the process of buying a new car totally frustrating. She spends an embarrassing amount of time tweeting responses to the Kardashian family.

Sometimes I find her faith charming; other times it is frustratingly childish. “Thanks Lord for letting me see another day!” can be followed by a retweeted “God is THE MAN!” All that can be followed by jokes about someone being a “squirter” in bed. I try not to extrapolate about her culture from just one person’s Twitter stream, but that’s also sort of exactly what makes following a random person so interesting. Are black Christians more open about their sexuality? Young people? Northern people? I’ve just got this single data point, but it’s more than I had before.

If you’ve been reading PostBourgie for a while, perhaps you’ll be familiar with a really important part of our ethos: “Blackness is a fuzzy, complicated thing, and we’d really like to discourage essentializing it, policing it, legislating it, or lambasting folks for showing insufficient fealty to some goofy, arbitrary Negro ideal.” On the flip side, this necessarily means that we don’t support the notion that there is an observable, universal “black culture.”

The fact that Johnson says he tries “not to extrapolate about her culture” based on her tweets suggests that his first inclination is to do so. Let me explain why this is racially problematic, even if that’s not the intention: you don’t learn about “black culture” by following a “sexy black woman” on Twitter. You learn a little about that particular woman. And even though Johnson suggests this is about making friends, what he’s really doing is this. Or, as my tall, white internet friend Ann Friedman writes (in a totally baller post) for Feministing:

She’s not his friend. She’s just someone he creeps on the Internet, in the name of diversity. And his description of this woman is kinda, well, creepy. It’s not an invasion of privacy per se — presumably her tweets are all public, or she approved him as a follower. But he describes her — on a very highly trafficked blog, I might add — as if she’s a rare creature.

After reading Johnson’s post, I couldn’t stop shuddering. My reaction was basically: “ew, ew, ew! needashowernow!” I was creeped out by the post because it read as though Johnson thought he was in a room of white dudes who don’t know any black women, and he was holding court while describing The Odd Habits and Foibles of Sexy Black Women on the Internet. But instead of doing this in a private space, he did it on a well-read blog, a blog that I — not a white dude — read semi-regularly (though less so after all the bowing and scraping to Apple).

Calling her tweets about God “charming” and “childish” is creepy. Talking about how he enjoys looking at the pictures she sends to other guys is creepy. Focusing in on how sexy she is, when we have a history in Western culture of black women being treated as hypersexual creatures is creepy and sexist. And the exotification of this woman is creepy and racist. It’s not lynchmob racist, or job-discrimination racist, or even “black people suck” racist. It’s the kind of racism that’s casual and common and doesn’t technically ‘hurt’ anyone, so its defenders would have us believe it isn’t racism. But it is. And it matters.

You see, Johnson isn’t interested in getting to know this woman. He’s interested in picking up “data points” about her and figuring out how he can use those to make blanket statements about sexy women, black women, black church-going women, northerners, whatever.

We can play that game, too. Ann, again:

After reading this enlightening blog post I realized that white tech dudes are underrepresented in my social network. So I picked out my new friend (Joel Johnson, naturally!) and started paying attention.

He’s a single white tech writer, but has taken pains to make clear that he’s! had! sex! He seems to have some problems seeing women as three-dimensional people, but he’s not a total misogynist, either. He’s very proud of his writing ability. He has a lovely shock of blond hair, although I am surprised how much his style is still predictable-hipster-douche when he’s older than 30. His home is Eugene, Oregon but he’s in the process of moving to Portland. He spends an embarrassing amount of time tweeting about Apple products.

So. I’m a single, sexy black woman on the internet. I’m currently reading a book of science fiction short stories from the 1970s while I take the bus to and from work. I think Kim Kardashian is beautiful and boring. I don’t know anything about religion. I sometimes say “innanet” and use black vernacular. I’m also a bunch of other things that you may or may not discover through my tweets. None of these things makes me more or less special than any other woman, of any color, online. They’re mostly just markers of my particular version of a middle-class black background and they make me, me. If someone is following me to discover things about black people because they don’t know any black people in real life, then they’re probably not getting their money’s worth. They’ll learn a lot about me, something about Howard alumni and AKAs, a little bit about the black folks that I share a background with, and nothing about any overarching “black culture.” If they followed me and five of my closest black female friends on Twitter, they’d find this out even more quickly.

I’m willing to bet that Johnson had good intentions while composing his post. Diversity, yay! But the execution is where it falls apart. That woman he follows is not a person to him, she’s a creature in the internet zoo, and it makes me shudder to think that there are more people out there like him. But then again, to borrow from Ta-Nehisi’s post yesterday — I’ve no desire to “petition motherfuckers for my humanity.” The people who enter into new relationships online in good faith reveal themselves over time, and those who don’t write posts like Johnson’s.