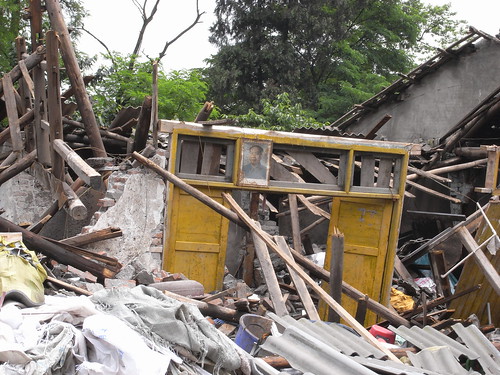 (by Winslow Robertson, and x-posted from The Monkey Steals The Peaches)

This is both a crass attempt to get you guys to check out my blog and also to make a larger point about life. Thanks to PB for letting me do this, and G.D. in particular.

On May 12th, 2008, around 2:30 in the afternoon, a huge earthquake hit Sichuan province. Tens of thousands of people died in the resulting shock and aftershocks. My aunt-in-law was one of them. My then fiance, now wife, could have been a victim of the earthquake as well.

There is a 12-hour difference between China and the east coast of the United States. I was either working on my final papers at 2:30 or I was passed out from exhaustion. Sometime before 10 AM, my best friend Daniel sent me a text message informing me of the earthquake. It woke me up, and with eyes half-open, I picked up the phone, barely comprehending the message my eyes were so blurry. An earthquake? Probably a minor one, nothing more than a 4.0, nothing worth waking me up for. Still, I decided I might as well get up and call my fiance to see what was going on. So began my May 13th, 2008.

It was not a good day.

I stumbled to my computer in my boxers (the standard uniform for doing anything in my room) and turned it on. After it booted up, I opened Skype, put on my headset, and tried to call Shoe (a bastardized spelling of my mispronunciation of her family name, 舒 [shu]). I could not reach her, instead the machine on the other line told me that there were some technical difficulties, so I tried calling her again, with the same response. I kept trying, but still nothing. I was starting to grow worried, so I opened up CNN.com to see what had happened, and there was no mention of it. That did not make me feel any better, because no American news outlet was going to give me the coverage I wanted. Frustrated, I opened BBC.com and found the news that I had been dreading: the earthquake in Sichuan was by no means minor. It had caused major damage. Communications were down. People were missing.

I started to refresh the BBC page every five minutes, and the death toll was rising. I looked at the map to see if the earthquake had actually struck Mianyang, where she lived, or if it had just damaged the phone lines in an obscure mountain town, far from any major cities. The website could not tell me the epicenter, just that the most damage had occurred in the cities, towns, and villages to the west of Chengdu. Cities like Mianyang.

At a loss for what to do, I tried calling my mother, but her phone line was busy. I called my father, and in as calm a tone as I could muster, I told him that there was an earthquake in Sichuan.

“Oh God Winslow, is everything ok?”

Whatever semblance of a stiff-upper lip I had was washed away by my tears, as I began to sob and moan. All I could say with any coherence was

We discussed any and all possible courses of action, and he tried to comfort me. I managed to get in contact with mom, and she told me she would try to contact State Department people in Chengdu and ask them what they knew. She tried to comfort me. The phone lines to Sichuan were still down, but I tried sending her a text message (thanks to the miracle of modern telecommunications). I would spend the next three hours in a constant state of freak-out. I nearly had a nervous breakdown.

At precisely 2:11 PM, I received a text message that said the following

“Im ok but i cant call people and get any calling from people.”

Shoe was fine. I could breathe again. I saved the text message on my phone (inadvertently tying me to a lifetime of Verizon’s mobile services, as I will forever keep the phone and the text message and I have to stay on contract to do so), and we began sorting out the situation through a flurry of texting. A few hours later the phone lines were up and I could call her directly from Skype. She had experienced the quake, her apartment rolled and rocked like the Ark during the flood, but she managed to evacuate quickly and nobody in her complex was hurt. She had yet to make contact with all members of her family, of our family, my family. We learned later that her aunt, my aunt, our aunt,  had perished in Beichuan.

I felt completely helpless, as there was nothing I could do to help her and our kin, but she told me everyone was sleeping in the streets and there was a shortage of tents. This was something I could help ameliorate. I told my family and they sent all the spare tents they could get their hands on (considering the amount of outdoorsmen/women in the clan, this was no small number). I bought a tent and mailed it. What was perhaps the most touching episode, though, was that after I posted my information on Extremeskins.com (A Washington Redskin fan site), a reader managed to drop everything and deliver a tent to my parents house for no compensation. It was swiftly shipped to Sichuan.

I wrote this to commemorate the anniversary of the Earthquake, which, while nice, is still somewhat selfish of me. Everyday around the world there are injustices and tragedies, and what makes the Sichuan Earthquake particularly noteworthy? What makes my pain on that day special? My answer is nothing, a cold and blunt assessment to be sure, but something I truly believe. What was worse on May 12th 2008? The Earthquake? Or the ongoing occupation of Iraq? Or massive global inequalities? Or the ongoing Congolese Civil War (actually I think this is the worst

)? What made May 12th such a cathartic experience was the outpouring of support on behalf of the victims, from the stranger on Extremeskins to Lin Hao to the millions of Chinese people who rolled up their sleeves to help their countrymen (which is not a given considering just how tense some of the provincial identities can get) to the Chinese government doing its damnedest to assist in disaster relief (a government that, on occasion, helps its citizens? Sign me up!) to the international support and sympathy shown by the global community. In short, people like you and I made a difference in the lives of so many. People who should have been too busy, too unengaged, too poor, or too bureaucratic, put aside their interests in the name of common humanity. No matter how screwed up this world is, I have faith in the possibilities of the human spirit and the human community. And I know we all have stories of people who didn’t need to help but did. I hope that one day I will hear yours.