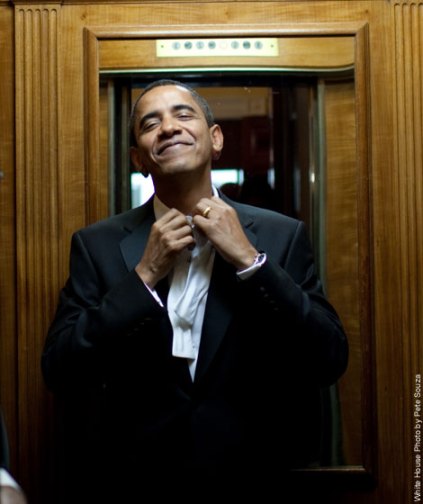 Upping that MPG. How much of a roll is your boy Obama on? California has been angling to make cars more efficient for a minute now, and it makes up such a big part of the market for cars that if it set its own (tighter) fuel efficiency standards for cars, it would effectively be writing the rules for the rest of the country. The Bush administration had been stonewalling Schwarzenegger, arguing that only the federal government had the right to set the rules on emissions. Obama disagrees. Environmentalists rejoice.

Too Much Power? Jamelle agrees that Obama’s first week was filled with smart moves, but worries that it’s an example of just how much unchecked power is now wielded by the president. (shani-o once said that Obama will be the most powerful president in the history of the country, and she’s right.)

Starting High. Obama begins his presidency with a sky-high 68-percent approval rating, per Gallup. Only Kennedy’s was higher at the start of his presidency. You gotta wonder how soft that number is.

Getting Under al-Qaeda’s Skin. It’s one of the major upsides of having a popular president and, thus, an improved global reputation, which makes it harder for the terrorist group to find sympathizers.

Uh, at Least They’re Consistent. Did the Bush folks do anything right? When the new administration went to look at the classified info on the Gitmo detainees, they found that many of them didn’t have complete files, and the pertinent data — if there is any — is scattered across several agencies.

A 28th Amendment? After the clusterfuck that resulted in trying to fill a vacant Senate seat in Illinois and NY (more on the second in a bit), WashPo called for an end to appointed Senators. Russ Feingold (D-Wis) is doing them one better, calling for a constitutional amendment that would strip governors of the power to appoint Senators in the event of a mid-term vacancy and let voters decide in a special election. But Ben Smith says that special elections have their own problems, like “exaggerating the power of organized interests.”

Asking to Be Taxed. Nevada’s brothels are lobbying to be taxed. Why? The state’s 26 legally sanctioned brothels are worried that the much-needed revenue from taxes can serve as a bulwark against making prostitution illegal in the cash-strapped state, which is growing more and more socially conservative.

We Won’t Have Billy to Kick Around Anymore. The insufferable, spectacularly inaccurate Bill Kristol — who is responsible for foisting Sarah Palin on the rest of the country — has penned his last column for the NYT. Finally.

The Night He Blew Up. No one outside of the fashion industry knew who Jason Wu was. And then a certain First Lady wore a gown he designed to the inaugural balls, which was a shock to everyone, including Wu himself.

The Hip-Hop Inaugural Ball. Sponsored by Heineken, lots of Hennesy, and Russell Simmons holding forth on Obama and hip-hop. “He embraced it as much as a politician can,” he said. “I was amazed by his willingness to put some of us in the room. If I was running for President, I wouldn’t want me to speak for me, so I was amazed. He let those of us who love him work for him.”

The Fierce Urgency of ‘Ow!’ One of Obama’s staffers once posed in her skivvies for Maxim, and is dating the president’s 27-year-old speechwriter.

Sole Power. We appreciate the sentiment, but most of these shits are ugly.

On-Screen Opposites Attract. Peggy from Mad Men is awesome. SNL’s Obama is not. Anyway, the actors who play them are getting married.

For the Foodies. We shouted out Darius T. Williams before, but he’s worth big-upping again. I fucks with these recipes. Hoard.

Show Us the F***ing Way… To Peniston? Make a left turn at Titty Ho, then head straight to Butthole. You can’t miss it. (Oh, don’t let the earnest cultural criticism fool you; we’re twelve over here.)