The Myth of Rosa Parks. 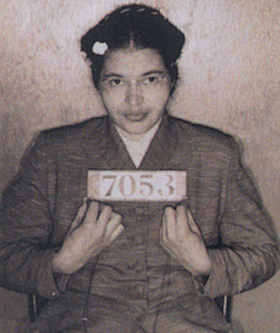 Last week ari re-posted a smart blog entry on the Santa-fication of MLK, whose rough  edges had been made smooth in our civic memory. He was despised while he was living, and his stances also confounded other leaders in the Civil Rights Movement, but little of that makes it into school textbooks.

Rosa Parks has gotten the same soft-focus treatment from history: a tired seamstress refuses to give up her seat on the bus after being asked by the white bus driver and is tossed in jail. The real history is a little more complicated. Rosa Parks, who was a civil rights activist before the incident, was one of several women arrested for not giving up her seat — part of a deliberate campaign by black leaders agitating for desegregation. (For various reasons, none of the “optics” were right for other arrested women; Claudette Colvin, a teenager who was arrested, turned out to be pregnant.) E.D. Nixon, the president of the Birmingham NAACP chapter, felt that Parks was “beyond reproach,” and so it was settled: she would get on the bus, not give up her seat, be arrested, and the galvanized local black community would boycott. The rest is history.

Or was it? Duke’s Tim Tyson sets the record straight.

There’s a sense in which Mrs. Parks is very important to our post-civil rights racial narrative, because we really want a kind of sugar-coated civil rights movement that’s about purity and interracial non-violence. And so we don’t really want to meet the real Rosa Parks. We don’t, for example, want to know that in the late 1960s, Rosa Parks became a black nationalist and a great admirer of Malcolm X. I met Rosa Parks at the funeral of Robert F. Williams, who had fought the Ku Klux Klan in North Carolina with a machine gun in the late 1950s and then fled to Cuba, and had been a kind of international revolutionary icon of black power. Ms. Parks delivered the eulogy at his funeral. She talks in her autobiography and says that she never believed in non-violence and that she was incapable of that herself, and that she kept guns in her home to protect her family. But we want a little old lady with tired feet. You may have noticed we don’t have a lot of pacifist white heroes. We prefer our black people meek and mild, I think. …

The cult of personality that grew up around Martin Luther King very quickly after the bus boycott, the media focused on him, and people like E.D. Nixon and Rosa Parks were really pushed out of the limelight. In fact, I’ve read a letter from E.D. Nixon in 1958 where he was really explaining quite bitterly that he had gotten Ms. Parks out of jail, he had called a boycott, and that neither he nor Ms. Parks had been invited to the third anniversary celebration of the Montgomery bus boycott’s victory.

I think she was a seasoned political activist who knew that it was useful for her to seem apolitical. But the myth was only useful, really, in  1955 and 1956. But as the years go by, of course, historians didn’t do much better. And we expect historians to dig a little deeper than just the politics of image.Of course, I think there’s also a serious gender element to this in that when male politicians are quite forceful, you know, we like that. I think we prefer our women to be demure and modest and unassuming – and unaware.