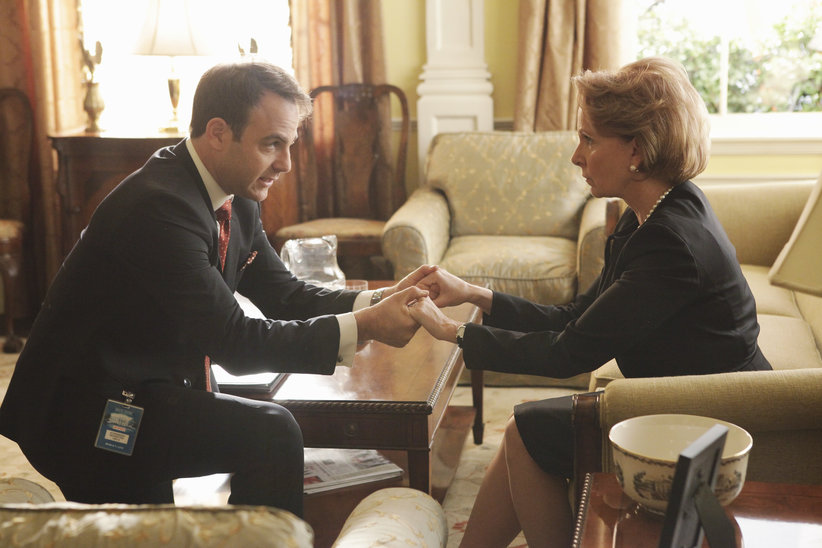 A few weeks ago, I burned through the whole first season of House of Cards as well as a few eps of the latest one. The entire time, I couldn’t help but be reminded of our friends in Scandal-land. Both set in a Washington full of murderous elected officials. Their respective main characters are cynical narcissists. And both Frank and Olivia are orbited by people who are almost implausibly, contemptibly stupid. (I’m talking about Cards’ Lucas and Scandal’s Quinn here. Ugh.) Scandal, though, manages to be as fun as House of Cards while being infinitely less self-important.

When we first started recapping this show during Season 2, I’d never seen an episode. But now, I feel like I know all of its tricks. Liv has to vet Andrew Nichols, Fitz’s former lieutenant governor in California and his pick to replace Sally as veep. As soon as Nichols tells Liv that the reason he never married was because he lost the one great love in his life, I muttered to my friends at my crib that that great lost love was Mellie. Scandal isn’t the kind of show that busies itself with  writing in random characters details, so if the writers were sharing this tidbit about ol’ boy, it was because the One Who Got Away was someone we already knew. And since Scandal will always err on the side of DAAAAAAAAAMN!, it had to be Mellie.

Can we talk about Mellie for a hot second? She’s been my favorite character since I started watching; she’s the show’s true tragic figure. She loved (loves?) and believed in Fitz, and she’s endured horrible traumas and kept them quiet in order to make his political career possible. And what does she get for all that? Fitz cheating on her and throwing it in her face, even as Mellie herself tries to cover up the affair that (again) threatens to bring down his presidency that she effectively made possible.  It’s remarkable to me that so many people hate Mellie on a show in which she’s surrounded by a literal murderers’ row of venality. (It would be easier at this point to count the people on Scandal who haven’t caught a body at this point.) So yeah. That scene with Mellie and Liv in the restaurant during which Mellie hurled all kinds of darts at an increasingly whiny, annoying Liv,  was gold. Mellie is taking it into her own hands to quiet the resurfacing chatter about Liv and Fitz’s affair, and so she decides that the best way to do that is by presenting a public image of a Mellie/Liv friendship. But the whole scene is Mellie gleefully dagger-twisting.

“I’m making a respectable woman out of you, Olivia,” she says to Liv. “My husband could never sleep with you if we’re friends.”

This shit right here is why I’m Team Mellie.

Mellie then hands Liv a list of dudes she’s allowed to date to help throw the public off Olitz’s scent. Liv’s only retort is #lipquiver, because it’s becoming increasingly obvious than Liv is deeply ungully. (I sorta wonder if Liv could retort, though. She doesn’t have any moral high ground in their little dyad; wouldn’t anything Liv say back just underline the callousness of what she and Fitz are doing to Mellie?)

The disaster of Olitz is underscored again when Papa Pope — chilling on a random bench because that’s what gangsters do — hips Olivia to the fact that he’s going to use her to bring down Fitz’s presidency.

At this point, I half-expect fire and operatic music to play behind The Brother From Another Planet whenever he launches into one of his monologues, a la Al Pacino in The Devil’s Advocate. To say Joe Morton chews scenery suggests something more subtle than what Joe Morton actually does in these scenes. That motherfucker is Godzilla, stomping on everything and then roaring bellicosely.

James is surreptitiously feeding info about the shadiness of Sallie’s husband’s death to a reporter — and David Cohen — in order to get back at Cyrus, which reminds us that Liv and Fitz might not have the most fucked-up relationship on this show.

And there’s the Quinn storyline, which I could care less about. She’s kidnapping children now, which makes her pointless AND evil, while Harrison is now screwing some woman who is his supposed enemy. It’s taken him 2.5 seasons to get even this sliver of character shading or a B-plot, so you take what you can get, I guess.

Liv definitely has no moral high ground here — although I saw a lot of viewers rallying behind her last night, as the Mellie-got-a-side-piece-too! reveal popped off. Olitz fans were all too willing to label Mellie a hypocrite for calling Liv so many homewreckers and whores over the years. But there are no neat corollaries in this love triangle, are there? Do we know yet if Mellie and Andrew’s affair was pre- or post-Mellie’s marriage? And if it’s rekindled now (and it totally will be), can anyone blame Mellie for gettin’ it in with fine-ass Jon Tenney? No. No, they cannot. She has suffered far greater indignities than Liv has in service to an ungrateful, unfaithful spouse who — it can’t be said enough — she loves.

We know without a doubt now that Mellie formerly and currently loves Fitz and isn’t just keeping up appearances by remaining married to him. This is a sticking point for me because this show’s initial conceit was to sell us on the idea that Mellie was a heartless political climber using Fitz for his power. Now that we know how desperately she desires him and how many attempts she’s made to woo him back — not in power plays, but in hopes of reprising a once-happy marriage — it makes Olitz even grosser and Liv, by extension, more difficult to root for.

Enough about Mellie. I actually don’t have any favorites on this show right now — not a single one — so while I’m glad to see Mellie finally be desired by someone who (as far as we know) isn’t out to violate or manipulate her, we have a ton of other stuff to discuss after this long hiatus, right?

Before we go further, I have to say that I’m not a House of Cards viewer, but it was fascinating to see how much Twitter commentary crossover there was between the two series last night. A lot of “Frank Underwood wouldn’t stand for this!” whenever Fitz was onscreen. Is the handling of politics and, well, scandal, on House of Cards heightening folks’ notice of Scandal’s glaring flaws? (I certainly wouldn’t doubt it.)

In other news, Harrison finally gets a storyline (complete with shirtless lovin’!). I’d always figured Adnan was a dude. (I know. I don’t know what show I thought I was watching.) Depending on what their backstory is, it’s starting to make sense that he hasn’t been in a serious relationship since the show’s inception. This woman seems to have serious dirt on him and access to his heartstrings. No moving on for him. (Although I still think he and Abby are endgame.)

So James is finally, finally sick of Cyrus’ shit and ready to pack his raggedy duffel bag, the daughter Cyrus boasted about “buying” him, and what’s left of his scruples and go. Let’s see how long that lasts.

The last thing I want to discuss tonight is the scene between Eli/Rowan Pope and Liv. Is it me or did he totally slut-shame her? He chastises her for letting Fitz “defile” her and basically says that his losing his position with B613 and her mother’s escape from custody are all owing to the fact that she can’t stop herself from sleeping with him. It’s pretty despicable — especially since she only sought him out to extend empathy for his losing his job to Jake.

I have personal reasons for why I have such low tolerance for the belligerent, disarming way Papa Pope addresses Liv on a regular basis, so maybe I’m reading too much into that. (I actually had a couple people defend his behavior in that scene to me last night, so who knows?) Either way, Joe Morton was a casting coup for this series. Sometimes, you need your scenery masticated — and who better than this dude? Now we know how Liv got her growly, loud lean-forward schtick.