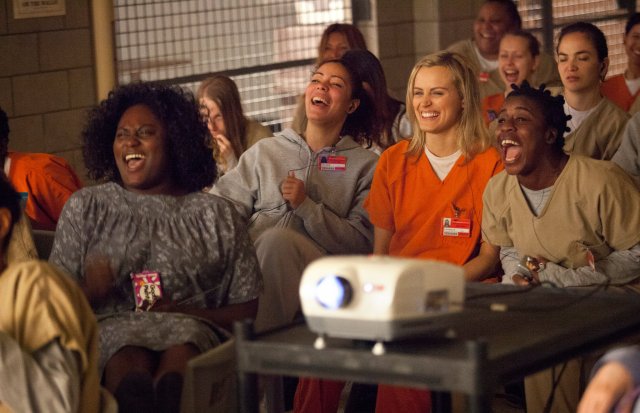 They might crack smiles but ain’t a damn thing funny.

Perhaps Biggie and Jigga could trade bars without spoiling your favorite television shows, but we can’t. Not that we spoil everything–we’re admirably vague about the course (if not the culmination) of season one. But otherwise be warned that the below contains spoilers of Netflix’s Orange Is the New Black, which T. and Charity watched in marathon shifts, like hopeless fiends on a delicious bender. At your own peril, please do read on.

Netflix series are becoming my entertainment Krispy Kremes: I think I’ll just consume one at a time, but then I end up gorging on three or four and feeling guilty afterwards, yet satisfied. First it was Breaking Bad, then House of Cards, and now Orange is the New Black.

Snared by an expiring drug conspiracy charge, nice white lady Piper Chapman gets sent up for a bid in federal prison, where she fears for her decency and fiends for a mere dollop of cocoa butter. Tampon McMuffins are served, with bloody vengeance.

I was hooked by the second episode. Crazy Eyes had just expressed her interest in Piper by sharing her headphones and then coincidentally caressing her inner thigh to let Piper know that she now had a prison boo. That was the point where I went from:

“This show is aight.”

“EHRMAGAWD MUST WATCH ALL OF THE EPISODES”.

So many prison boos. The fact that we’re even joking about lock-up cuddle buddies is our telegraphing that Orange isn’t, you know, Oz. The ladies get off; the ladies get by.

I was prepared to like Orange about as much as I’m primed to enjoy a complementary Boston Cream or a Meek Mill mixtape. I was not prepared, however, to bawl alone at 5am while inadvertently strangling a box of Triscuits as I begrudged a ‘buffering’ bar. Seriously, what kind of comedy dare flood your homeboy over here with tears?

How do you distill the greatness of a show that you’ve seen in a marathon session into a brief write-up? It’s hard.

For one, I really liked the show’s use of flashbacks to show how the ladies ended up in prison. It humanizes their experiences and the myriad paths that led them to prison. It also powerfully illustrated why one ought not mess with Ms. Claudette. SAK PASSE!

The flashbacks are crucial, both creatively and (I’d argue) culturally. Gripes about stereotype abuse and exoticism have lately emerged in criticism of the show, but it’s the flashbacks that chiefly undermine the presumption that the women who are holed up in Litchfield are cast merely as types–as “the kind of people” that one will conjure when one thinks of prison. Forgoing vast shame and leaden grace, Orange’s hallmark proficiency is its animating how variously, wonderfully wrecked human beings can be.

While Litchfield isn’t the most glamorous setting we might wish upon these sisters, I’m thankful that Orange is proudly brown, with an emphasis on ‘proudly’. Anyone who’s viscerally ashamed of, say, Taystee, or Diaz, or Janae, or Sophia is, I think, underreading these portrayals. Much as the many narrative trajectories upend Piper’s perception of threats and comforts, showrunner Jenji Kohan challenges the audience to understand, e.g., Taystee not as Big Loudmouth Black Chick, but as a woman who’s been routinely failed by a civil framework that isn’t much interested in how she landed before its courts in the first place.

All to say, these characters are savory reductions. Piper, Alex, Red, Sam Healy, Officer Mendez—the paced evaporation of their facades and careful reveal of their animating anxieties are payoffs of patient, masterful storytelling. Healy is a waddling testament to the caution that, nope, No one expects the Spanish Inquisition.

Back to Mendez for a sec, because God this man is sooooooo bad—but soooooo good. I imagine that Officer Mendez smells of upper lip, smoke and Stetson cologne. The relish with which Pablo Schrieber plays this role makes Officer Mendez such a great villain. He deserves an Emmy.

In contrast, Alex Vause’s charisma is enough to convince me to fly to overseas in a terrible blonde wig and shoulder pads, just so I can be locked in women’s prison with her. Though she’s kind of a prick, and I’m not really sure I trust her. But that’s what makes her alluring to both the audience and Piper. Also, the Piper-Alex chemistry is way more believable than the Piper-Larry chemistry.

As far as paramours go, I mostly loathe Alex. I prefer Larry’s sheepish brooding to Alex’s ever-wavering Daria / Holly Robinson shtick. She’s too often a clang, deployed to make Piper act beyond the bounds of her character–though of course Piper’s core struggle is discerning who, exactly, she is.

In any case, while Alex throws a few screwdrivers into Piper’s life, collateral damage is done to the emotional logic of the plot. Chiefly, that Piper and Alex’s chapel tryst yields a bizarre and implausible aftermath. Throughout the episode that follows, Piper isn’t particularly vexed by having just cheated on her fiancé, which made me wonder whether the show takes lesbian sex somehow less seriously than it regards heterosexual love. i.e., if Piper had instead jumped a dude (somehow) in that chapel, would we really be expected to play along with the charade of Piper proceeding as if her transgression weren’t immediately remarkable?

Yet I’m steering us into the weeds here. T., reel us back.

Everyone is interesting to me—except Piper. For now. Ten or eleven episodes in, I realized that everyone else was meatier, curvier, more alive than our protagonist. Maybe that was something the writers did on purpose, maybe not, but it seems like Piper is supposed to be a representation of what a ‘normal’ person would be like in prison. She remains fairly normal until the point that she cusses Healy out in solitary—SHIT, she took that man’s dignity.

The last scene of the series, I think, is where we see Piper get real. Really real. Viciously real. Will she ever get out of prison after that? And is it wrong that I was woofing it up like I was at an Arsenio Hall taping when she beat the brakes off that girl?

Piper’s our lead and chief vantage, but more often than not, Chef Red is the center of narrative gravity, as much as Red’s kitchen is the nerve center of prison society. Honestly, I’m glad that we’re thus spared from endless thumbing of Piper’s navel.

Exemplary of Piper’s worst tendencies is the ‘WAC Pack’ episode, in which the prison’s demographic blocs elect delegates to lobby Sam Healy for better living conditions, variously defined. Dawning earnest and high-minded, Piper urges recommissioning of the prison’s GED program and restoration of the jogging track out in the yard. From an audience perspective, we perhaps admire Piper’s clamoring: The college-educated white girl is the only delegate who’s inspired to fight for something greater than free donuts. But we already know that Piper wants the GED program and the outdoor track because these are resources in which she, individually, is desperately interested. She’s advocating for herself, incapable of considering that only two inmates in the entire prison will derive any joy or sanity from running those lonesome laps.

I think Crazy Eyes landed the heaviest line of the season, that plaintive ding of naiveté when she dared to ask Piper, “Why does everyone call me Crazy Eyes?” That unanswered silence plucked my heart offbeat for the rest of the episode.

You know, what most surprises me about Orange is all of the love. It’s not romantic love in all cases, but there’s an overarching treatment of the show’s characters as chipped hearts on the long, idle mend. Just as The Wire coddles its dope boys, Orange cherishes the wily inmates of Litchfield Women’s Correctional. Even Piper, who’s a bit of a dick.

What’s funny is that our initially sympathy for Piper rests in the commiseration that Piper doesn’t really deserve to be in prison—rather, that she doesn’t deserve to be surrounded by so much filth and menace and crude rehabilitation. But ultimately, it’s Piper who proves to be the monstrosity, and it’s all of Litchfield that’s sanded her to an unexpectedly rotten core.

By the end of season one, we’re not inclined to like Piper. We’re not inviting her to our bootleg Scrabble matches, nor do we share our headphones with her pale ungrateful ass. But we’re definitely rooting for her to suck it up, sort her life, and maybe do something with that hair. It took until the final two episodes of the season, but I finally give a shit about Piper Chapman. In a stall with no door, I pray that she one day squats at ease.