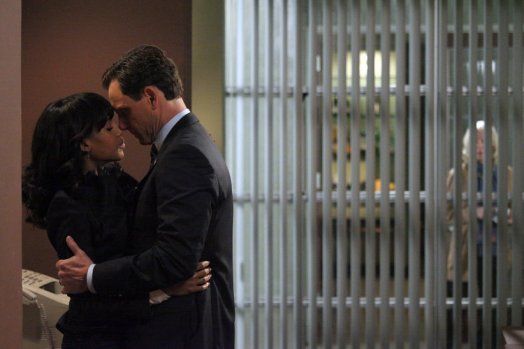 Last week, a commenter suggested that I was getting some details  twisted when I called the whiny, impulsive, emotionally stunted, and violent “Fitz vaguely serial killer-y.”

“Um, as far as I know, Fitz hasn’t killed anyone.”

But it looks like we just give him a little time.

Because while the Scandalverse is supposed to a soapy melodrama with a political backdrop, we’re  through with murderers. The number of characters on this show who’ve caught a body has become pretty impressive.

Cyrus had a pregnant woman killed last season and almost had his husband killed this week.

Huck actually was an insatiable serial killer (with a heart of gold) until the writers dropped that storyline.

Huck’s girlfriend shot up an entire family a few months ago (in the episode that aired the day before the Newtown massacre).

Verna, the Supreme Court justice, put out a hit on Fitz.

Gov. Reston, the dude Fitz beat out for the Oval Office, killed someone at his house in the front half of this season.

And now Fitz, the President of the United States, has killed someone — and not in that several-layers-of-extenuation-via-the-military kinda way —- but a terminally ill old lady. (So basically, the American people were going to vote for a murderer either way.)

There’s nothing fundamentally wrong with killing off lots of characters, but it matters how and why people get offed or why someone opts to have someone murked. So when Verna was giving her sanctimonious speech about why she had to kill Fitz — he was a liar and mean to the Statue of Liberty or whatever the fuck — the music swelled and she started to shout. It’s like the show felt that by turning up the volume on Verna that her motives might resonate or seem convincing. NOPE. That rationale was pretty stupid.

And come on!  This is Scandal were talking about; the details almost never matter. Everything — character consistency, continuity, the show’s own internal logic — takes a back seat to the Next Big Plot Twist. (It feels sort of like watching a weekly M. Night Shymalan movie; why would you invest in anything the story establishes in the first two acts if you know that it will all be revealed to be bullshit by the third?)

This is why I think I’ve come to like Mellie so much. She’s supposed to be a villain, but she’s easily Scandal’s most sympathetic and consistently written character. She resents her husband because she’s smarter and more savvy than him, but he has the career she should have while he’s been forced into pointless, demeaning photo ops. She hates Olivia for all the obvious reasons, but also because it reminds her of Fitz’s impulsiveness and short-sightedness. Sure, she fires off lots of purple insults at everyone, but wouldn’t you if you were surrounded by all the incompetent, would-be Machiavellis that populate her world? At least you know where she stands.

Right after this episode aired, the Scandal writers tweeted that the next ep will take place TEN MONTHS INTO THE FUTURE. To eprove it, the teaser for next week shows us that Liv’s hair has changed significantly. They also show us Felicity’s Scott “Noel” Foley as her possible new love interest (ain’t mad at all).

My first thought was, “Who pulls that big a stunt when it isn’t a hiatus or finale?” And of course, the answer to that is: the writer of a story that has nowhere else to go.

This week, every open plot arc was closed: in one of the better, over-the-top scenes of the episode, James forces Cyrus to confess to election theft; Fitz finds out who-all was in on stealing the election for him (and he doesn’t care about anyone’s involvement but Liv’s); Edison gets his grandmother’s engagement ring returned for a second time; David Rosen stays failin’; Abby finds out Liv and Harrison were behind her break-up; even useless Quinn decides to stop chasing down the details of her already-known-to-us story and just accept that she’s Quinn now, for good. And like you said, G.D., Huck makes a miraculous, no explanation-needed-recovery.

Mostly laughably, however, is the hamfisted way we find out who’s behind the president’s assassination attempt. Verna’s condition has gone from a year or two to live to “Somebody Gon’ Die Tonight; Somebody’s Mama Gon’ Cry Tonight.” So when Liv buys a clue and starts “confronting” her, Verna spews all this, “Yeah, I did it and I cried two tears in a bucket” vitriol. Liv feels “betrayed,” and I’m not entirely sure why. She has zero healthy friendships in this world.

You’re right that Verna’s logic for the assassination attempt makes zero sense, and neither does Fitz snatchin’ that oxygen (her wig was already gone; she’d snatched that herself. So this was the next logical progression, I guess).

No one’s going to be brought to justice for any of this. So there’s very little to do for the rest of the season.

Scandal has rushed all its resolutions. There are a few things that could’ve stretched all of this ep’s events out until the end of the season. They could’ve brought back the Scandals of the Week. They could’ve let Verna live longer. Huck could’ve killed one or two more folks. David Rosen could’ve, for once, gotten ahead. Abby could’ve let the firm for a while. Harrison could’ve botched something that would’ve taken about three eps to “fix.” Fitz really could’ve started divorce proceedings on Mellie. And Mellie could’ve waited on a natural birth (that would’ve conveniently coincided with the season finale).

But this is the route they took, and it ends with Fitz inexplicably heaping all his hate for what’s happened onto Liv. I guess we’re supposed to feel bad about that, or consider this whole thing an allegory about how adulteresses always end up alone. In a church pew.

Somehow, I don’t think that’s what the writers had in mind….