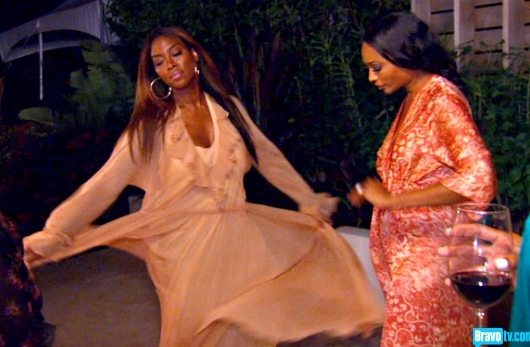 Kenya teaching the ladies how to dougie. I mean being batshit crazy.

Alright! Here we go! Nene and Kenya finally have that big fight the internets have been buzzing about since before the season started!

And by fight, I mean they do a weird little tango-waltz sort of thing.

This week’s episode starts in the middle of more of Kenya’s inappropriateness, passive-aggressively asking Phaedra if she can sleep with her husband. I think this may be the maddest we’ve seen Phaedra since she joined the show and I LOVE IT. Phaedra’s full of that good old I’m-Saved-Now-But-I-Still-Remember-My-Worldly-Ways-Very-Well-So-Test-me-If-You-Want-To vitriol. She’ll keep her prayer cloth in her hand, but push her too far and you might end up with it around your neck trying to remember what air feels like. Phaedra actually kind of sounds like somebody’s granny shooing neighborhood kids off her porch. “Gone somewhere, nah. Gone ‘way from ‘round here. GONE, NAH!” 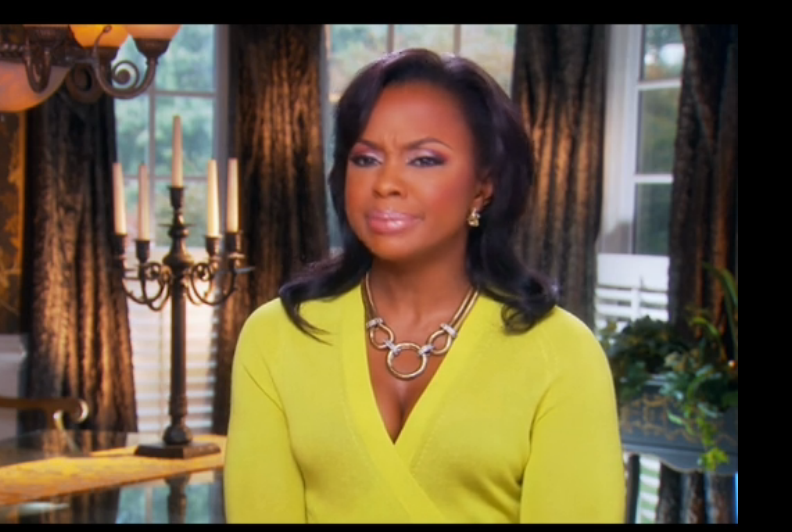 “Gone and put some ice in your pannies and gone, nah. GONE!”

I kept wanting to see more fire from Phaedra, but that’s probably because I know that had I been in her place, I’d have plenty more to say, but kudos to Phaedra for keeping her cool while expressing her displeasure. Kenya picks up on it, but rationalizes it all with, “Oh, okay, she’s sensitive.”

I hate it–haaaate it–when someone steps out of line and then accuses the offended of being sensitive. Maybe you were just flat out wrong? Hm? Maybe that.

In the midst of it all, Nene begins to do some sleuthing and asks if Kenya and Walter are really together. The self-proclaimed good judge of character may be exactly what she claims to be, since we now know that Walter and Kenya were not a couple, not during the filming of the show, not ever. Phaedra suggested Kenya put some ice in her pannies and calm down. I’d like to also prescribe putting some ice in her brain because the girl is clearly fried up there. That didn’t sound as clever as I wanted it to. Don’t judge me; it’s the holiday season.

Later, Gregg and his extraneous ‘g’ gather everyone around the dinner table for some good ol home cookin’ and, props to Gregg, cause the food looked pretty good. As they digested, the couples sat around making some slightly scandalous conversation about the “third shift” (in other words, *pelvic thrusts*) and being all in love and stuff. Everyone, that is, except Kenya and Walter who looked like they were sitting on pinecones. Soon, though, Walter excuses himself from the table, gathers Kenya, and the two go off somewhere quiet to talk. Kenya’s excitement was palpable. For two seconds I was almost like “oh snap, maybe he is going to propose.” He told her that someone on the island was getting married–but not her. Peter had planned a surprise vow renewal ceremony, and he wanted to let her know that. HA! I might be hating but the disappointment on Kenya’s face was delicious. It tasted like Oreo mint chocolate chip ice cream drizzled with a warm holy ghost sauce.

The next day, the ladies treat themselves to a day of pampering in preparation for Cynthia’s surprise nuptials, and mid-massage, Nene again asks Kenya if she and Walter are the real deal. I’ve been trying to avoid admitting it, but I think I actually like this new Nene. I guess money can buy you a bit of class because now that she’s had some success in Hollywood, she seems much calmer. She didn’t come at Kenya sideways with her questioning, but Kenya acted like she’d spit in her face. It pretty much went like this:

Nene: So Kenya, what’s up with you and–
Kenya: I DON’T GIVE A FUCK WHAT ANYBODY THINKS! I DON’T HAVE A PROBLEM GETTING A MAN! I HAVE BEEN PROPOSED TO 127 TIMES SO I OBVIOUSLY KNOW HOW TO GET A RING! YOU CAN KISS MY BLACK ASS!
Nene: …okay, girl.

The wedding was actually very moving and even though I’m not a fan of Peter, I thought this was pretty awesome of him. After the exchange of vows, all the couples lit and released wish lanterns. They all float happily into the sky with the promise of delivering their wishes for love and life directly to God–everyone’s except Kenya and Walter’s. Theirs pretty much made a running start, said “LOL NOPE” and made a suicide dive back to the earth. Even the lanterns know Kenya and Walter ain’t about a thing.

Climax time! I think the blowup starts off as a bit of a compliment (?) from Porsha to Kenya, who said that Kenya appeared to be a different person since their initial meeting. Kenya decided to show her that nope, she’s still the same unbalanced bitty who stormed out of her fundraiser. Porsha launches a series of attacks on Kenya’s inappropriate behavior during the trip, asking a “Chinese” man (he was Philippino) to have her baby in front of her “boyfriend,” and emphasizing the irrelevance of her Miss Black Person USA title. She held her own pretty well, but I could have given Porsha a couple of shading pointers. First, whenever you reference her “boyfriend,” be sure to use air quotes. Secondly, when Kenya asks, as she did, what title you have, the only response is: “What title do I have? WIFE, BITCH.” Boosh. All her base are belong to you. 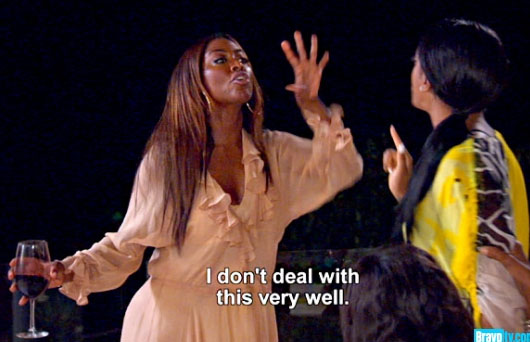 Things Kenya doesn’t deal with very well: hands in her face, spiders, the truth, sanity, anything.

At one point it looks like the ladies are actually going to come to blows, but Nene intercepts and diffuses the scuffle with a hug and a waltz-tango hybrid ending in a ballroom spin. Speaking of spins, before Kenya takes her leave, she twirls several times in a circle and proclaims herself “Gone With the Wind fabulous.” I’m sure that’ll be needlessly available on t-shirts soon.

“Gone With the Wind” fabulous, though? Maybe Soul Plane fabulous. Beauty Shop II fabulous. Madea Goes to the Wherever fabulous. I’m not so sold on Kenya as Miss Scarlet, though.