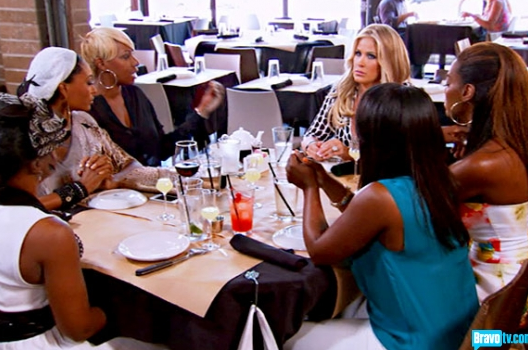 We’re nearing that time again! We’re just about at that point in a reality show’s season where the cast packs up their swimsuits, waterproof weave and mutual hatred for each other and goes on an international vacation. Because making public scenes in your own homeland gets kind of boring after awhile.

It’s here! It’s finally here! After weeks of being lead on, we finally get a little taste of Kenya and Apollo to put in our mugs! First, though, we’re forced to sit through more talk of Kim and the house nobody cares about. You know, them forcing a Kim storyline this season is kind of like the last season of Martin when Tisha Campbell refused to be on set the same time as Martin Lawrence. It was forced, awkward, boring, and they really should have just nixed it. The good news is that I think this is the last episode we have to pretend to care about Kim and her business.

Okay. Finally, the moment of truth: Kenya and Apollo meet. Phaedra and Kenya have decided to link up for a little double date, and I have to be honest, this kind of felt like a potluck. Phaedra brought a beautiful, perfectly cooked pot roast, and Kenya shows up with a box of Steak’ums. There’s a brief exchange of pleasantries before Kenya vomits her attraction to Apollo directly in Phaedra’s face, which, by the way, looked like this: 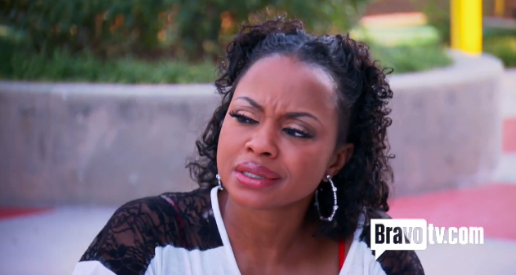 And Walter, who was also there, as Kenya appeared to have forgotten, made this face: 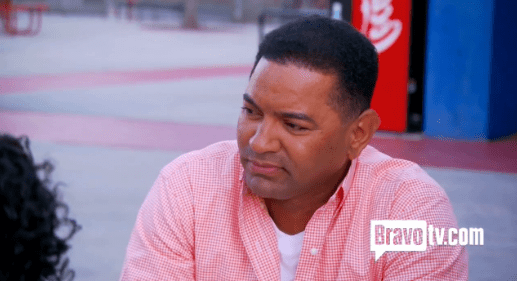 They speak for a time about this ridiculous workout video of Phaedra’s, the one that’s supposed to give you a supersized donk without breaking a sweat. Apollo seems to be asking legitimate questions about Kenya and her production company, which is supposed to be producing the video. To Kenya, though, they were “feeling each other out” and “playing tit for tat.” Ooh, girl. Girl, girl, girl.

Wait, speaking of this workout video — Phaedra mentions incorporating household objects into the routine, like… green beans. No, seriously. Green beans. She’s about to have your best friend Lucille at home bench pressing green beans. Madam, unless you’re going to put them in a pot, throw a hamhock in them, and eat them, I fail to see what green beans have to do with sprouting a pork-fed ass overnight.

Anyway. The couples take to the go-kart track, where Kenya and Apollo speed off, leaving Phaedra and Walter in the dust. Foreshadowing?? Kudos to the editors because if this Kenya/Apollo thing isn’t really a big deal, they succeeded in building up the suspense and making it seem like it.

From one double date to another: Nene, Gregg, Cynthia and Peter get together and discuss their upcoming group trip. Since they had such a great time on their trip to South Africa–you know, where Sheree and Marlo got into that huge screaming match, and where Black Babygate was spawned–the ladies are contractually obligated decide to take a trip to Anguilla. It began as a girls’ trip, but Cynthia decides to make it a couples’ trip instead. I see you, Cynthia. You ain’t slick. You made it a couples’ trip so single ass Kenya can’t go. Smooth. Kenya invites herself along anyway.

Porsha makes her requisite episode appearance and says her requisite dumb thing, asking her OB/GYN if there’s anything she can do to “higher” her chance of having twins. She later tells Cynthia and Nene that feeding the hungry isn’t something her grandfather’s foundation does during Thanksgiving; it’s something they do 265 days a year. (Maybe they take 100 days off? Everybody needs a nap sometimes, right?)

I’d like to take a few minutes to really, really appreciate Phaedra’s brand of freak. I love it. Looooove it to pieces. She is the perfect mixture of your grandmother in her saved years, and your grandmother in her scandalous younger years (and she had one. Let’s not pretend). Phaedra will tuck her prayer cloth in her purse on her way to a sex shop, just in case she’ll need it. I love her openness about sex, always ready to try Kandi’s latest toys (this week she was given some kegel balls, but she really wanted a vibrating penis ring) and not afraid to compliment an employee’s southern landscaping at a strip club. It’s refreshing.

In maybe my favorite scene of the show, Phaedra and Cynthia arrive early to a group brunch, presumably to bring some closure to their latest tiff. I applaud Cynthia for trying to be more vocal when it comes to standing up for herself this season, but before she could even open her mouth, Phaedra shows up with a huge lily from somebody’s Memaw’s funeral and a well formulated defense that only a lawyer could stitch together. Even I believed her, and I don’t believe anything that anyone says, ever. Kudos, Cynthia. 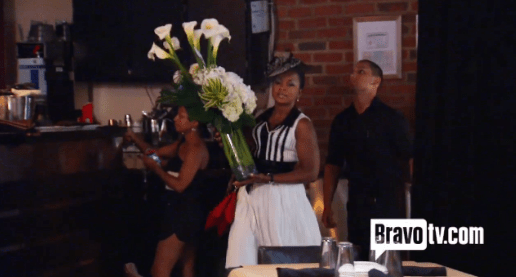 “I’m sorry your Aunt Maybelle died! And also that I cussed you out behind your back and you found out about it!”

Climax time! The ladies have all gathered to brunch and discuss the upcoming trip to Anguilla, including Kim and Kenya, though not everyone was excited about their presence. While discussing the trip, Kim begins, essentially, to lay out the groundwork for her inevitable cancellation, which rubs everyone the wrong way because the trip was scheduled around Kim’s availability to keep her from dropping out, as she always does. Kandi cancelled an appearance at the ASCAP awards, Cynthia passed on a job with someone, Phaedra had to postpone one of Flavor-Flav’s upcoming trials. All so that Kim could finally join everyone for some fun times. Kim pulls a Phaedra, telling everyone that she is magically 8 months pregnant and about to pop (during this argument, Phaedra was NOTICEABLY SILENT, as she should have been). Things heat up, words are had, Kim gets mad and runs off, never to be seen again. Kind of like when Judy ran upstairs on Family Matters and just never came down again, so exits Kim from the show. I won’t even pretend that I’ll miss her. Or Sweetie’s Juneteenth wig.

Next week, the folks terrorize international waters, and Kenya tries to turn Trois into a biopic. I’ll be there with bells on!