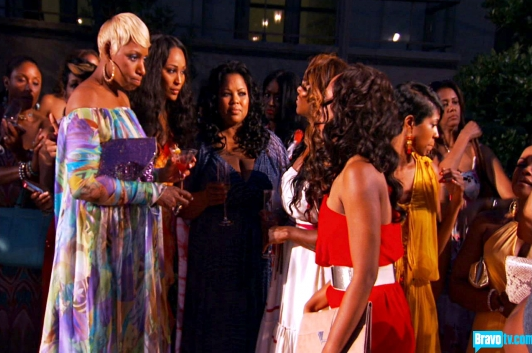 I watch this stuff so you don’t have to.  You’re welcome.

So.  The episode begins with Nene showing us just how little she knows about history.  Invited to appear in a gay pride parade, she talks about her love for the gay community, saying:  “I love the gays.  You know, they invented everything.  Nail polish and weaves and earrings and how to walk–gays have invented it all!”

Props to Nene for including her teenage son, Brentt, in the parade.  Jeers to her for adding an extra T to the end of his name.  Why did that happen?

Cut scene to a casual gathering of Kandi, Phaedra, and new housewife (who–surprise!–isn’t an actual housewife) Kenya Moore, who have apparently gathered to have a bite and spill some tea.  It’s Phaedra and Kenya’s first meeting, so of course Phaedra comments on Kenya’s ‘big ole faaawnky booty’ (not funky, but faawwwnky), as she is wont to do, and made this face. 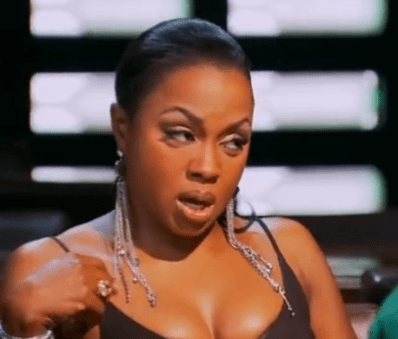 Kenya proceeds to tell the ladies about a little tiff she had with Cynthia at a recent search for Jet’s newest Beauty of the Week.  If you missed it, Kenya was more or less rude as all hell to the young ladies who were there auditioning (she clearly forgot that they weren’t looking for the next Vogue cover model, but someone for the last freaking page of Jet Magazine).  Kenya throws Cynthia under the bus, which was unfair because Kenya was in the wrong, but it was oh so fun to watch.  I’m very much into this Kenya vs. Cynthia subplot they editors are laying out for us.

Sweetie’s back after being fired by Kim last season.  This scene finds her sitting opposite Kim in a big red throne looking thing, and with an upgraded wig.  Know what this reminds me of?  When Denny’s got sued for being racist, so to prove they weren’t they put kente cloth designs on all the seats and pictures of Martin Luther King up all over the walls (that wasn’t just in Kentucky, was it?).  Anyway, Kim is talking to Sweetie about how she’s homeless because she can’t find somebody to buy the house that she may or may not have owned in the first place or something.  To be honest, Kim’s story is boring the hair off my nipples this season, so I wasn’t really paying attention.

Next we get a sneak peek of the questionable decisions that Kenya’s ovaries seem to be making in their quest to get knocked up.  Kenya is talking to her aunt, the woman who raised her, about her current beau, Walter.  Aunt is like, ‘when am I gonna meet this dude?’ and Kenya’s all, ‘after I get engaged!’ and Aunt is like, ‘dude, wtf?’ and Kenya’s like ‘you always hate my boyfriends!’

…So in delaying them meeting until you get engaged, Auntie won’t be able to dislike him?  This reeks of “don’t say anything to ruin this for me until I get pregnant.”  Somebody is so starved for sperm she can’t even think straight.

That did not come out the way I intended.

Elsewhere in Atlanta, Phaedra, Cynthia and Nene meet up at a gym for a workout that includes drinking sparkling water and not sweating at all.  As @kiajd pointed out, everybody’s hair is just a little *too* together for that to have been an actual workout.  While taking an unnecessary break, Cynthia points out that the Leakes-Bailey friendship contract requires at least three (3) Nene themed gatherings per year, and they’re 3 behind filling the quota.  Nene, ever humble, declines having the event be for/about her, and instead suggests having it in honor of all the women who independent.  Throw your hands up at her accordingly.    In spite of their tiff, Cynthia agrees to invite Kenya, and in spite of their years of tiffing, Nene acquiesces to inviting Kim.

Before we leave this scene, can we get a moment to appreciate Dexter, the ladies’ trainer? 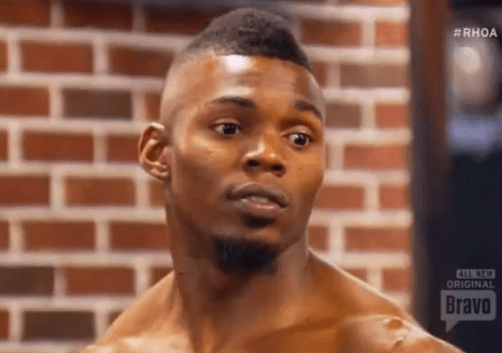 Next, we get to see the guy that Kenya is trying to baby daddify, and I swear I saw him on a Duke box or two back in the day.  He and Kenya meet to have a few drinks and discuss the health of her ovum.  Kenya asks Walter if he ever dated anyone she knew, he tells her that he asked Kandi out once, and she completely overreacts.  Because, you know, when you love someone, it’s your responsibility to never date or be attracted to anyone else even when you’re single and free to do whatever the hell you want to do.

The episode’s climax is when Cynthia and Kenya have words at their no-drama female empowerment mixer.  It basically went like this:

Cynthia:  Hey everybody, thanks so much for coming to this event that I put together!
Kenya: ENOUGH OF THIS MESS, HI EVERYBODY! YOU DON’T KNOW ME AND THIS ISN’T MY PARTY BUT I’M GLAD YOU’RE HERE
Cynthia:    …
Kenya:  Oh hey, Nene, listen, I wanted to say that I hate your friend, but I hope we can still be friends, k?
Cynthia: OMG AS IF GO AWAY THIS IS MY BFF
Kenya: NO YOU GO AWAY I WAS HERE FIRST
Cynthia: B’GOCK!
Kenya: BOCK BOCK BOCK!
Cynthia: CLUCK CLUCK GOBBLE BOCKABOCK!