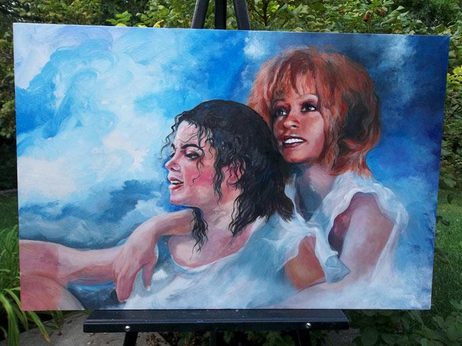 The posthumous superteam could be its own subgenre of mawkish black memorial art — y’all remember that time Tyrese wondered what would happen if Malcolm X baptised Tupac in a lake? These two were actually contemporaries, at least. And you know, this may be cheesy, but it’s not an aesthetic disaster.

But MJ was a Jehovah’s Witness, so it isn’t likely they’d be sharing the same afterlife, unless Whitney made a secret, late-life conversion! Does this artist know something we don’t? Or maybe MJ is actually in Whitney’s heaven, and she’s welcoming him into her more conventional Christian eternity. Or maybe they’re just in a steamroom and she’s giving him  a reacharound.