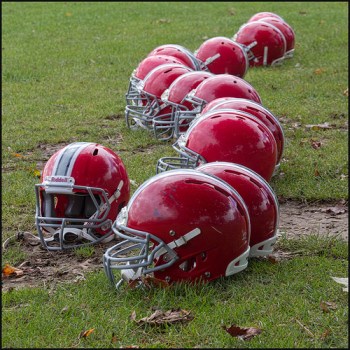 by TKOED; x-posted with permission from America in Black.

Two Sundays ago I was sitting on the couch watching football. My daughter came over, and sat with me. Now this was a minor surprise, because she’s never shown any interest in watching football or any other sport. I was pretty happy. It’s just another way for us to spend time together, and something else to teach her about. What she said next though really struck me: “Daddy, girls don’t know how to play football.” I was silent for a about a minute. Then I asked her what makes her think that. “I don’t know.” I asked if she’d heard that anywhere. “My head.”

Again, I was silent.

My mind was racing. My daughter is six. She rarely watches teevee. She spends most of her time at home playing with Legos, reading or drawing. I can’t think of a single instance where we’ve said to her or in her presence that anything is for boys or girls. In fact we do the opposite. Then I think “what about non-verbal cues?” Now this is much trickier. I spend many Sundays in the fall & winter watching football, and more often than not Erika is not sitting right there next to me even though she is a football fan. That being said I still come to the conclusion that she’s this getting this from school for the most part. Mostly other kids. The kids say “girls do X and boys do X” all the time. So where do I go from here? I do what I always do. I talk. A lot. I launch into a spiel that states that plenty of women, and girls know how to play football, and furthermore, lots of them DO play football. Not in the NFL, but a few times in college, and high school. I tell her that women & girls mostly play football with friends, and in organized leagues for fun. She nodded, and smiled. I don’t think she believed me though. Trying to raise a child in a world that’s constantly telling/pushing them in certain directions simply because of their gender is hard when you’re aware of that fact. Trying to raise a Black child in that world can be even harder. This country does not value your life as much as it values white lives. It’s not invested in your well being from the cradle to the grave. Ignorance can truly be bliss. I now believe that it’s not enough that I tell my child she can be anything, and that her being a girl makes no difference. Besides the simple fact that’s not true, it ignores all the non-verbal cues. It ignores the fact that when we watch teevee the people on MSNBC doing most of the talking are men (including guests). It ignores that most retail employees places we go are women. It ignores the fact that there are no women in the NFL. So I have to take a more holistic view, and these conversations are just one part of helping my daughter to not see her choices as limited by gender…or race.

As the week went along I kept thinking about it. Then the other day I got into what I guess you could call a debate on twitter over Black folks, and violence against women. The argument was being made that no other race celebrates violence against women the way Blacks do. I vehemently disagreed, but that discussion got me thinking about celebrations of violence in America. Many people argue that football is itself a celebration of violence. I do believe that to some degree it is. We are a country that cheers that degree of violence from high school on up. Probably even younger in a few places. To what degree does the celebration of violence between the end zones creep into the rest of our society? Or is it the other way around? We are a violent species. We’ve celebrated, and enjoyed violence for a long time. Does our celebration of violence on the gridiron help reinforce that some violence off of it is ok, or should be excused? I’m just thinking in public here. These were questions that I kept asking myself. Should I even want my daughter to come to love football? Is it selfish? Will it desensitize her to violence to any extent? Has it desensitized me? I don’t know the answer to either question. Or any of the questions above. I know I love my daughter, and I want to protect her. I also want us to share some interests.

Maybe football shouldn’t be one of them.