There’s a white woman running around New York in a big black afro wig because she thinks it’s teaching her something about herself and the world and how she sees it and how it sees. She blogs about it sometimes on her website, cheap viagra

This little journey began after she bought the wig as a part of her costume for a 70s-themed party. Apparently, some kind of inner enlightenment happened when she put on the wig because she decided to keep wearing it out in the world at random occasions (mostly at parties full of black people). I read the entire blog (in spite of how badly it hurt my face to do so) and I have no idea what the connection between her wig and this enlightenment is, and she never really says. It’s kind of like the GOP’s “we’re going to fix the problem by fixing the problem!” approach. She speaks so generally and vaguely about the purpose of it all that she just sounds crazy. It’s “a new way to view the world.” It’s “vital to the soul.” It’s a “genuine and profound and very real experience.” Also, vibes and inner peace and herbal tea and all that.

Before and Afro is a clueless, masturbatory foray into privilege so white I can barely look it in the face. In her entry “Let’s Get Real,” she insists that she “is aware,” that she knows that what she is doing can be seen as offensive. The fact that this whole bizzarro thing doesn’t end there is testament to how unaware she actually is. She insists that this isn’t about race, but then seems to try to justify what she’s doing in an entry full of pictures of random, anonymous black people. See? It can’t be offensive! Black people posed for her while she wore the afro, and even smiled! She rejects the idea that her wearing the afro isn’t a caricature or costume (…even though she bought it as part of a freaking costume), but really, it can’t be anything but.

Our hostess shared with us some before and after photos—her without the afro, and her after putting it on. The before pictures show a pretty blonde sitting posed on her bed, hands clasped sweetly on her knee, mega-watt smile filling the lens. 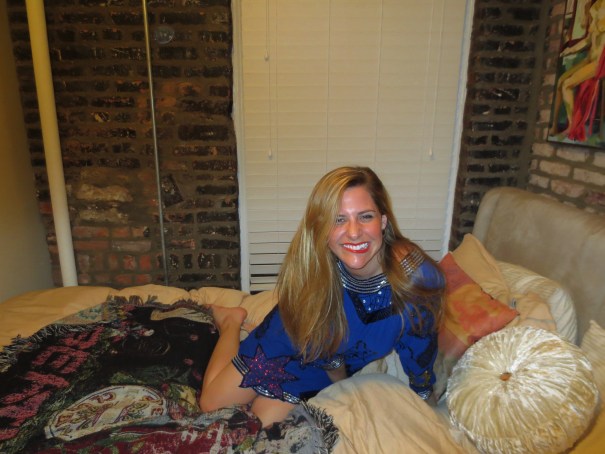 But then the afro comes on, and POW! 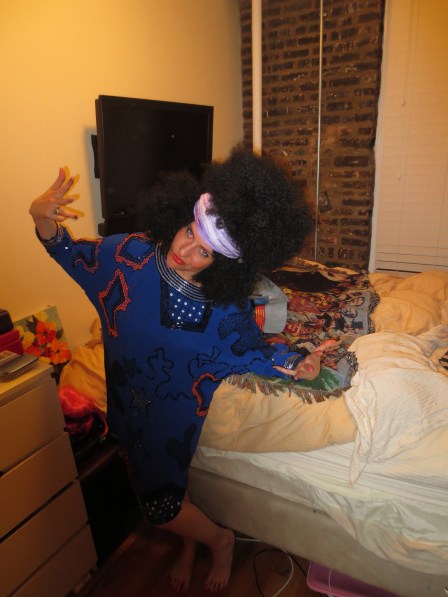 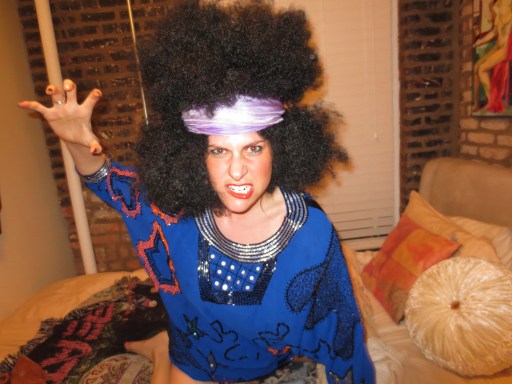 Look at those hip-hop hands! The confrontational stance! The scowl! The animalistic baring of teeth and claws! Is this who afroed people are? She surely seems to think so!

A couple of commenters, someone using the handle Paige, in particular, tried to tell her how what she’s doing is essentially the very definition of white privilege. To this point, our hostess addresses the criticism (again in her “Let’s Get Real” entry), essentially whining about being misunderstood. Dear Lord. I went to school with a thousand of her. There is nothing more maddening than trying to explain privilege to someone who thinks that they are the lone exception. They’re not the ignorant ones. No, no. It’s the ones who don’t know any better than to take offense.

Blatant white privilege aside, it’s just really freaking weird. I just have to question what kind of life you’re living to begin with if the whole thing can be changed by putting on a hat or a pair of glasses or some earrings. Because that’s really how she’s treating this afro. As a simple accessory, something easily slipped into and out of, completely trivializing all of the history and turmoil that black hair holds.

If you’re going to do this, lady, commit to it and do it all the way. First, ditch the cartoonish, goofy, ostentatious wig and get one that looks like it just may have actually come from your head. Something in your own, actual hair color, well-pruned and neat. Put it on and leave it on. Don’t just wear it to parties and fried chicken festivals. (Seriously. She literally wore it to a freaking fried chicken festival—“obviously an occasion to wear the fro.”). Wear it and keep it on when your boyfriend/girlfriend asks you if you’re really going out like that, when s/he tells you they prefer you long, blonde, and straight. Stick with it as your boss is gingerly looking for the politically correct way to tell you that your hairstyle is unprofessional and isn’t properly representing the company. Keep it on after those smiling nods of approval you got when you were so clearly in costume give way to scowls, sneers and giggles. Continue to wear it when people tell you you’d be so pretty if only you did something different with your hair, and as you sit through all those Herbal Essences commercials that remind you that femininity is long, flowing, silky, and bouncy. And when you finally can’t take it anymore and you want your long straight hair back, keep the fro on, but slather your head in a relaxer cream full of carcinogens that could very well kill you one day. I wonder how your outlook on life would change then?

But, praise White Jesus, you are in luck! You don’t have to do any of that! At the end of the day, you can just take off your hair, skip back into your privileged little pocket, and whip out your afro when you’re in the mood to be praised for how liberal and daring you are, walking on the wild side every once in awhile.

In conclusion: who do I have to talk to to get an invite to that delicious looking fried chicken soirée?! I have an afro; I’m in, right?