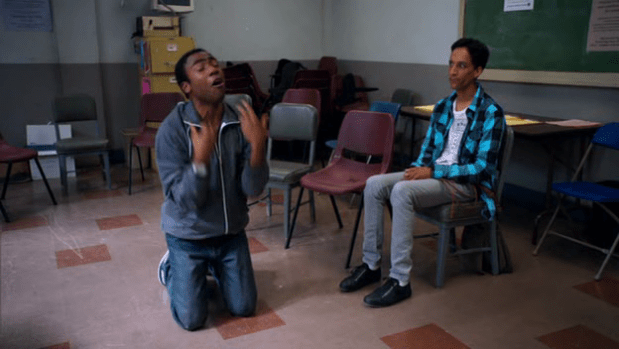 Considering how self-assured this show became by the end of season one, it’s weird to go back and watch the episodes when they were still finding their voice.  I had forgotten how much the “Jeff is trying to sleep with Britta” plot drove the early A-plots. I remember watching the show on the strength of Joel McHale and Dan Harmon but I started to lose faith that this show would be all about Jeff and Britta with some wacky supporting characters. I’m glad I stuck with it. 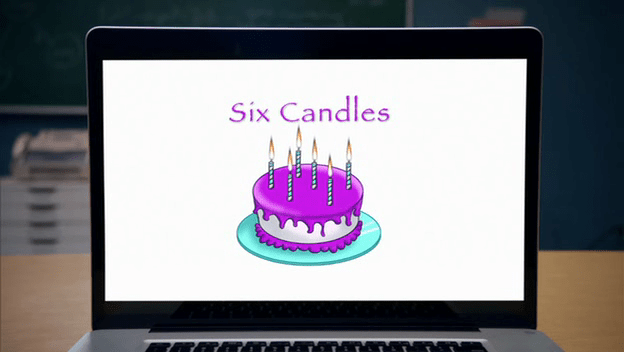 Jeff, in an attempt to get an easy A, takes Professor Whitman’s (John Michael Higgins) class (that we later learn is Accounting).  Whitman is clearly a parody of Robin Williams’ Mr. Keating in Dead Poets Society (a reference that would have been more clever if Jeff hadn’t stated it in the first three minutes).  Jeff convinces the study group to also take the class as well. Annie is reluctant at first but then agrees to the second Troy says he’s in (I had forgotten about Annie’s crush on Troy).  Abed, however, can’t take the class because his father will only pay for classes that will help him run the family restaurant. What Abed really wants to do is take film class. Britta pays for the class despite Jeff’s protestations that she not interfere.  Oh and Troy sneezes like a little girl.

Professor Whitman is onto Jeff and threatens him with an F if he doesn’t genuinely seize the day which leads to some corny attempts by him to convince the professor.

Abed’s first assignment in film class is a documentary and he starts filming Jeff and Britta. Abed’s father (played by Glee’s Iqbal Theba) shows up to yell at “Mister Britta” for interfering in his and his son’s business.  After convincing Abed to stay with film class, Abed’s father disowns him and leaving Britta and Jeff in charge of raising him. Abed spends much of the episode filming Jeff and Britta arguing about Abed like surrogate parents.

After Britta reaches her breaking point, Jeff arranges a meeting between Abed, his father and Britta to talk it out.  At this point, Abed shows them his film titled ‘Six Candles’.

This is a largely forgettable episode except for the insight into Abed’s character.  It’s becoming a staple in sitcoms to have a character that is somewhat disconnected with reality.  That person is allowed to say and do random outlandish things for laughs and the viewer, instead of questioning them, come to accept them as they are and just roll with it (ex. Dwight Schrute from The Office, Tracy Jordan from 30 Rock).

It appeared that Abed was just going to be a tool for spouting pop culture references but this episode, through his film about his parents’ divorce, we learn that there is something mentally wrong with Abed. Jeff and Britta don’t get it but Abed’s father sees the meaning.  Abed thinks that his strangeness is what caused his mother to leave or at least he thinks his father blames him for her departure.  His father realizes that film is a way that his son can express him since he can’t seem to do it directly. It was the first of many strangely heartfelt moments and it won’t be the last time we visit Abed’s psychosis (everything comes to a head in season two’s claymation episode, ‘Abed’s Uncontrollable Christmas’).

To reward Jeff for helping her with Abed, Britta kisses him passionately in the view of Professor Whitman.  Jeff gets an A+ in Accounting and is more smitten with Britta than ever.

In the B-plot, Pierce teaches Troy how to sneeze.  Seriously, how did they convince Chevy Chase to do this show? 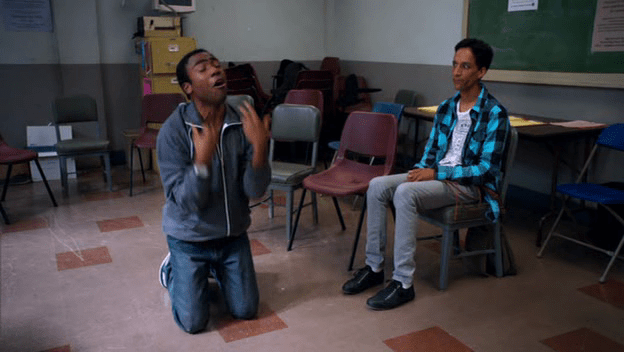 "The Soul Train Awards were tonight!!!

Jeff starts out the episode avoiding walking with Shirley to class because of her perceived “Oooh that’s nice” personality. However, when Britta starts flirting with hackey sack enthusiast Vaughn (Eric Christian Olsen), Shirley and Jeff bond over making fun of him (Who doesn’t have a few friendships like this?).

Meanwhile, Annie begs her way into Professor Duncan’s (John Oliver, always funny) social psychology class to study the Duncan Principle (Short version: People throw tantrums when they lose control of a situation).  Annie recruits Abed and Troy for the experiment and the class via camera watches the room of subjects slowly going crazy waiting for an experiment that will never begin.

Troy and Abed are the last two to break.  This marks the first appearance of Overly Emotional Troy that has become a recurring theme in the show.  Troy has had very little to do in the first three episodes (aside from the tags).  He was just playing the dumb jock with very little on his mind.  In 30 seconds, we finally get a glimpse into why Donald Glover was cast (The part of Troy was originally written for a white guy).

Abed calmly sits in the room 26 hours, subverting the Duncan Principle and the experimenters become subjects as Annie and Professor Duncan freak out and turn on each other.  After the experiment ends, Annie angrily dimisses Abed and sends him home.  The next day when Annie yells at Abed asking him why he didn’t leave the room, he replies, “Because you asked me to stay and we were friends.” If this were a laugh track show, we’d hear an “Aww” right there.

As Vaughn and Britta get closer, Jeff struggles to be friends with her. He tries to refrain from mocking his hippieness and tiny nipples with Shirley but when Britta shares with him a poem that Vaughn has written, Jeff can’t help himself but take a camera photo of it and share it with Shirley who eventually shows the study group.  Predictably, Vaughn enters the room as their reading the poem and is hurt (“This is the least tight thing that’s ever happened to me.”).  Britta gets mad at Jeff.  Jeff gets mad at Shirley.

Afterwards, Shirley apologizes and confesses to Jeff that she has a gossiping problem. This isn’t the only study group she’s been in.  She was given the nickname “Tattl-lina” and kicked out. They decide that they can’t talk about people anymore and since their relationship doesn’t work without the gossiping, they go their separate ways (but not before Shirley tells Jeff that Britta had a sex dream about him).

Annie apologizes to Abed by getting him the first three Indiana Jones movies (“…because the fourth one blows”) and they are cool again. Jeff apologizes to Britta while telling her that they need to re-define their friendship. They settle on the kind of friendship where “you have to occasionally cat sit.”

Pierce was on the periphery with his ear-noculars.  It’s not even worth explaining.

This episode was an improvement over ‘Introduction to Film’ because, despite still focusing on Jeff wanting to get with Britta, we got to see Jeff interact with Shirley (they have more chemistry than Jeff and Britta but I’m not trying to say that they should be together).  Also, we got to see an inkling of Alison Brie’s comedy chops in her argument with Professor Duncan (I still saw her as Trudy Campbell from Mad Men up to this point).