Home » Browse PostBourgie » The Odds Are Stacked Against Us.

The Odds Are Stacked Against Us. 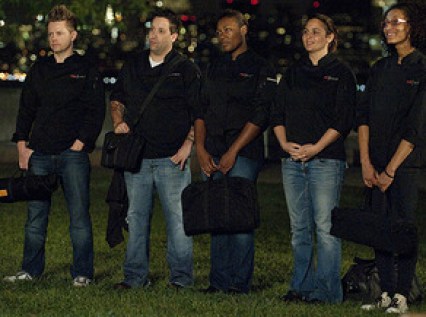 In August, as the seventh season of Top Chef wound up, I wrote about how tough things were for chefs who aren’t white and male on the show. So tough that in seven seasons, only one woman and one Vietnamese-American had ever won. In the seventh season, the first African-American chef took home the top prize.

And things were shaping up to be better in Season 8, for which the show asked back the best of the losers. That included lots of women and people of color who were crowd favorites cast out of their original seasons too early. And then, in the last contest before the finale filmed in the Bahamas, the judges decided all five remaining contestants were so awesome that they would all go on to the finale. The best part? The five included three women, two of them African Americans. The other woman is Italian. One man is Italian*, and the other is Anglo-American.**

Despite those odds, guess who’s winning?

That’s right, the three women were the first three to go. As I wrote in the previous post, gender and race discrimination replicates itself on television contests. Do we know for sure that Carla, Tiffany and Antonia should have won? No, but it’s so hard to tell because judging food is such a subjective activity.

More than that, though, is the way judges and contestants talk about food and the female chefs. Richard, one of the last two contestants remaining, lost to a woman, Stephanie Izard, in season 4. From the start, he told us that he’s most famous for losing. Over and over, he repeats the point that that season should have been his for the taking, and that he was the best chef that year but choked in the finale. That narrative, that he deserved the win, is counter to everything we’re supposed to believe about Top Chef. Every year, especially after a controversial decision in which a really good chef goes home, the judges say that they don’t consider past performance in making decisions. That is, they consider each meal in front of them as if it were the only one, and each chef is only as good as his or her last meal. So, did Richard deserve to win Season 4? No, because he didn’t. Whether he choked or not, his final meal wasn’t as good as Stephanie’s.

But the idea that, by default, white men deserve trophies, spots in top colleges, and the job they’re after is a persistent one. Women and people of color are always usurpers. There have been times this season when the male contestants, particularly Mike Isabella, gripe about the quality of the meals that give female chefs the win. No other winners’ legitimacy is challenged that way.

*I’m not sure what discrimination Italian chefs face in the professional culinary world, but I will say that Mike Isabella, who is Italian American and grew up in New Jersey, like faced the stereotypes perpetuated by many about working-class Italians and so, for the purposes of this post, decided it was important to point it out.

**We know this because in the final show before the finale, a genealogist gave each contestant his or her family history.