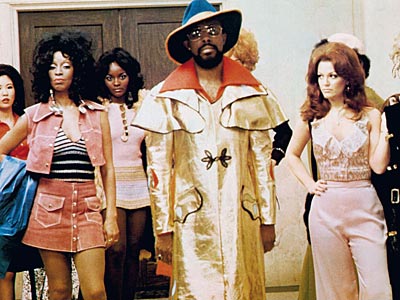 William Andrew Short was born in New York City in 1953, but by 1974 he was known as Willie Dynamite, a driven, heartless pimp determined to be #1 on the scene.  He was well on his way until his operation was brought down by Cora, a social worker who did her best to convince the women of his “production line” (as he called it) that there was a better life out there for them.  His career as a pimp ended with the deaths of both his top worker, Honey, and his mother.  Disillusioned, he decided to walk away from the game, Literally.

He wandered aimlessly for several miles before stumbling onto a vibrant residential avenue named Sesame Street.  It took several moments for Willie to realize that he was not in the middle of a bad trip, that the 7 foot canary and non-extinct wooly mammoth-like creature he saw parading around were not hallucinations.  Taken with the effervescent innocence and wholesome air of the place, Willie decided to move in permanently.  Vowing to leave every bit of his old life behind, he changed his name to Gordon and never, ever spoke of his time spent as a pimp on the mean streets of New York City.  In the beginning, Gordon faltered a few times — asking Bert why he didn’t put Ernie on the street to make some money — but he soon shook free of his old skin.  He married a woman named Susan, adopted a son, Miles, and now only flexes his pimp hand when germs get out of line.