Home » Browse PostBourgie » Know Your History: Stripe and The Gremlins.

Know Your History: Stripe and The Gremlins. 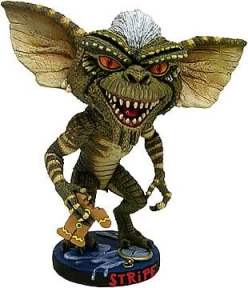 The horror comedy Gremlins was released in 1984 to mixed reviews and allegations of racism from the black community.  Per Wikipedia, “Patricia Turner writes that the gremlins “reflect negative African-American stereotypes” in their dress and behavior. They are shown “devouring fried chicken with their hands”, listening to black music, breakdancing, and wearing sunglasses after dark and newsboy caps, a style common among African American males in the 1980s.”  Jesse Jackson soon got wind of the hubbub and adopted the cause, picketing in front of movie theaters and  Warner Brothers Studios in demand that the movie be shelved.

The Gremlins in the cast became alarmed.  Work didn’t come easy for a short little imp troll lizard thing back in the 80s, as society was not as egalitarian as it is now; in an effort to secure their paychecks, the Gremlins decided to fight back.  They appointed Gizmo as their spokesperson in hopes that his lighter skin would win the trust and affection of the public.  Eventually, the uproar died down and the movie went on to be a box-office success.

The Gremlins were unable to find further work after the movie, their reputations tarnished by the bad press.  Within five years of the movie’s release, nearly all of the Gremlin actors faded into obscurity, at least three committing suicide. The only success story is Stripe, who played the Gremlins leader in the movie.  In 1997, he joined the Louisiana hip hop group the Hot Boyz after changing his name to Lil Wayne.  He has since gone solo, made a shitload of money, and looks decidedly worse than he did in the 80s.