The Complicity of Bruce Wayne. 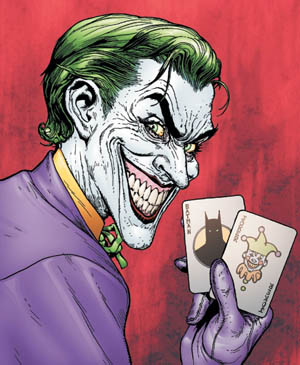 There’s a scene at the very beginning of the recent animated film Batman: Under the Red Hood in which the Joker, in a characterization that is more Heath Ledger than Mark Hamill, is taunting a bound Robin while he beats him over the head with a crowbar. This homicidal Joker is the way Batman’s archnemesis looks much of the time these days, and when it’s done well, the character comes across as both fascinating and terrifying. He kills capriciously, for no discernible reason besides  his own amusement.

But it also showcases a real problem for the Batman mythology. Later in the movie, a character gives an angry speech in which he asks why Batman hasn’t just killed the Joker, considering all the atrocities he’s committed. And that guy’s right. The Joker’s caught mad bodies, has beaten the second Robin to death, and crippled Barbara Gordon, the first Batgirl, by breaking into her house and  shooting her in the back. The Dark Knight’s response is thoroughly unconvincing: “Because it would be too easy!”

Motherfucker, what?  So thousands of Gothamites have to die — all those guards at Arkham Asylum, all those random civilians blown up or gassed or gunned down — because Batman, the only person who can ever seem to get close enough to The Joker to take him out, doesn’t want to violate his moral code? At what point is the blood of all those dead people on Batman’s gloved hands? We’ve all heard hypotheticals put forth by death penalty proponents in which the only way to save countless lives is to execute someone too dangerous to even be imprisoned. Well, the Joker is that hypothetical.

(Batman isn’t alone in his culpability. Arkham, from which mass murderers seem to escape monthly,  should have been decommissioned a long time ago. Also, Gotham’s corrupt police force doesn’t have a single cop with an itchy trigger finger? In real-life Gotham, cops shoot. Tragically, and often with  much less provocation.)

There are larger narrative reasons for keeping the Joker alive; he’s probably the most well-known bad guy in all of comics. But the in-universe logic is type janky. Batman and Joker are supposed to be locked in an endless metaphysical stalemate between good and evil, two demigods whose epic battles results in all sorts of collateral damage for regular-ass people.  By that measure, it’s not really a stalemate. Batman is losing.