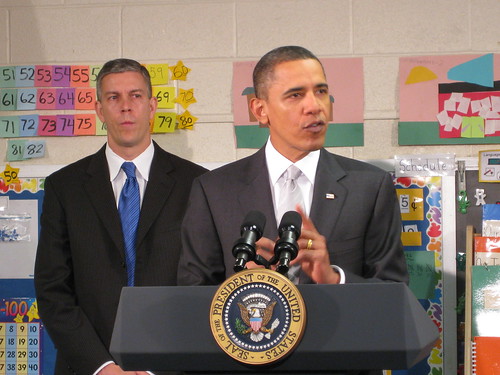 Under Race to the Top, the Obama administration’s signature education initiative, state governments were lured by the prospect of billions of dollars in federal grants to bringing their school systems in line with certain vogue-ish educational reform ideas championed by the White House. Among the chief criteria for winning the money: relaxing local rules to encourage the creation of more charter schools.
This would make  a lot sense if charter schools were better at educating kids than public schools — but they aren’t. Only a small percentage of charter schools outperform traditional public schools, but there are plenty of reasons to be skeptical of even that performance. Many charters report their impressive test scores and college acceptance rates, while being much more circumspect about their attrition rates. Touting the fact that each of your 100 seniors is going to college seems impressive until you realize that those seniors started high school in a class of 200, with half of them transferring back to traditional public schools or dropping out entirely along the way, essentially leaving the school to report the performance of only its strongest students.

Over at The American Prospect, Sarah Garland points to another way charters’ stats are inflated: holding kids back.

Although there are no national statistics tracking the percentage of students held back in charters, there is evidence that the number is large. Schools in charter hotspots like New York and Houston report retention rates as high as 23 percent, much higher than the district averages, which range from 1 percent to 4 percent. Margaret Raymond, director of the Center for Research on Education Outcomes at Stanford University, which conducted a major national study on charter-school performance, says she’s observed that charter schools tend to hold students back at higher rates than regular public schools. And a recent national study by Mathematica, a research firm based in Princeton, New Jersey, found that a sample of KIPP middle schools, the biggest charter network in the country, had a significantly higher retention rate than traditional public schools. …

At 31 charter schools [in New York City] that reported their retention rates in the 2008-2009 school year, 16 percent of the sixth-grade class was held back. Compare that to non-charter public schools, where only 1 percent of seventh- and eighth-graders were held back.

High retention rates can help to boost test scores at charter schools, at least in the short term. Students may do better on tests the second time, and retained students’ scores are dropped from their cohort, so a class of students could improve its test scores over time because the lowest performers have been removed. And sometimes low performers simply leave the charter school when they find out they’re going to be held back.

Since students who are held back are more likely to eventually drop out of school altogether there’s potentially serious fallout from this wave of mass retentions that won’t really become clear for a few years down the line.

It’s not clear that charter schools are purposely padding their stats by doing this, but there’s obviously plenty of incentive to do so. Charters rely on private largess to keep running, and that loot tends to go to schools that get results. More and more, though, we should be skeptical of what those results mean, and how the schools arrive at them.